In September, the first locally visible project of the Saari Residence’s ecologically sustainable residence activities, known as the Sustainable Lifestyles Accelerator, kicked off. On the last Saturday in September, some thirty participants and representatives of local companies gathered at the premises of the former Mynämäki College of Crafts and Design.

The Saari Residence’s ecologically sustainable residence programme was launched locally this autumn. The Sustainable Lifestyles Accelerator is the first project in the ecology programme and aims to highlight the key role played by consumer habits and lifestyle changes in mitigating climate change and preserving natural resources. One of the Accelerator’s starting points is the international report 1.5-degree lifestyles: Targets and options for reducing lifestyle carbon footprints, which sets clear targets and options for slowing down climate change. The report revealed that climate emissions must be reduced by up to 90% by 2050 if global climate targets are to be met. 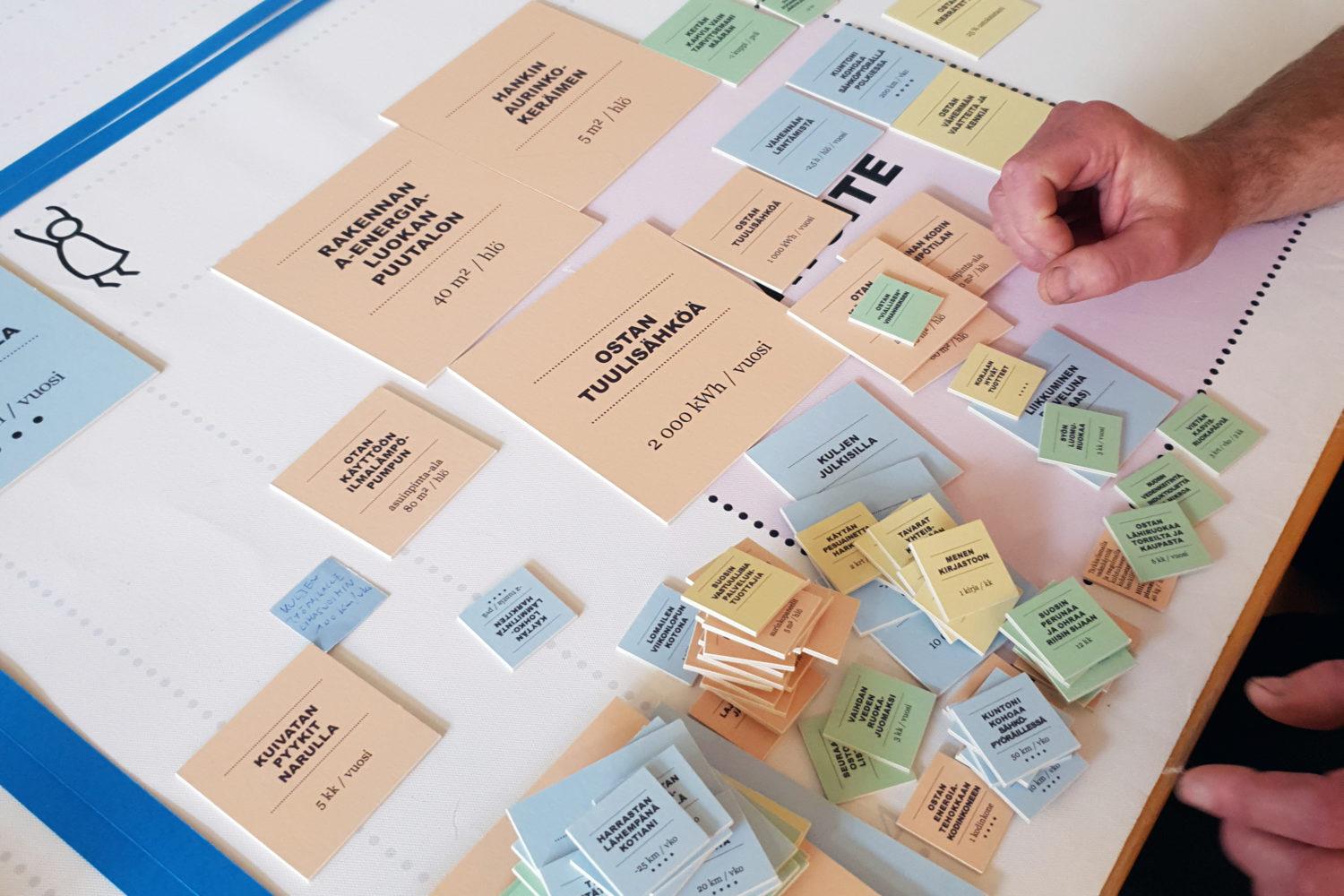 The 12 households that participated in the Mynämäki workshop have committed to reducing their carbon and material footprints in their everyday lives for a period of one month. During the Accelerator workshop, the participants looked at ways to make lifestyle changes that are beneficial to the climate, while also being suited to their situation in life. Before the workshop, each household had completed a separate questionnaire, which formed the basis for a calculation of their carbon and material footprints.

At the workshop, they played a 1.5-degree lifestyle game, which prompted each household to consider how they could reduce their carbon footprint to meet the 2030 climate targets. The game included a selection of activities, and the participants chose the ones they felt suited their daily lives, such as buying wind power, installing an air source heat pump, adding vegetarian days to their diet, or commuting to work by bicycle instead of a car. They arranged their selected actions on a timeline ranging from things that could be carried out already during the trial period and over a longer term.

During the day, the participants also attended experts’ speeches on climate change and sustainable lifestyles. Vesa-Matti Eura, Technical Director of the Municipality of Mynämäki, talked about Mynämäki’s activities within the Towards Carbon Neutral Municipalities (Hinku) network, while Michael Lettenmeier, CEO of D-Mat Oy, spoke about the aspects of reducing one’s carbon footprint: How can each of us reduce our carbon footprint to meet climate targets? According to Lettenmeier, you can reduce the environmental impacts of your consumption, for example, by reducing your consumption or by switching to less carbon-intense alternatives. The greatest effect is achieved when both actions are successfully implemented. 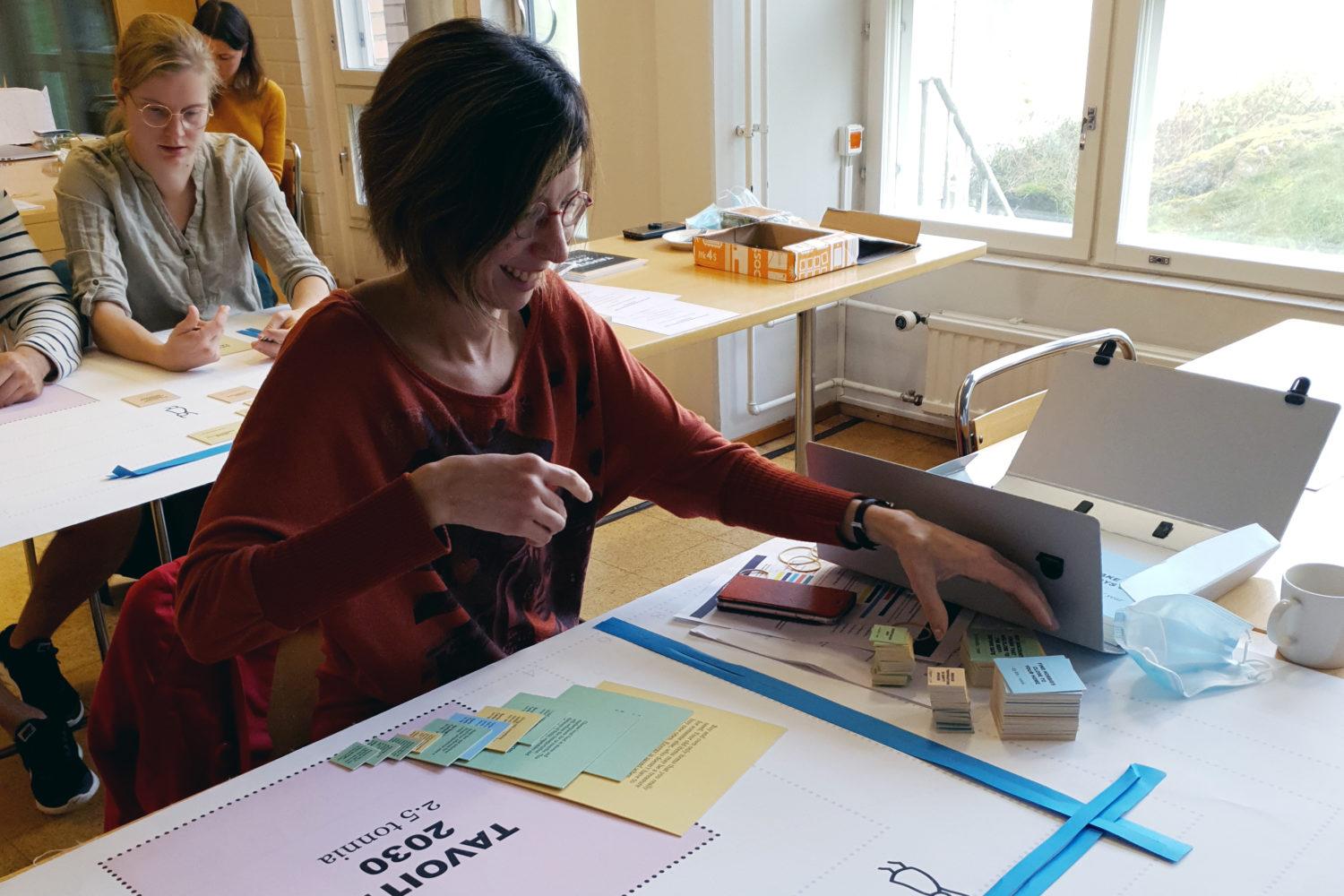 The Accelerator’s next phase is a one-month trial period that takes place in October. This trial period is aided by a roadmap created using the 1.5-degree lifestyles game, which contains the easy actions chosen by each household to implement their carbon footprint reduction. To support the participants during the trial period, they are given a calculation of the carbon footprint reduction they will achieve with the actions they have chosen along the roadmap and also a list of their chosen actions to make it easier to follow their progress. The list also makes it easy to continue making progress towards the 2030 target.

The Mynämäki Accelerator will end in November after a joint workshop focusing on the future, where the participants will share their experiences of the trial period and assess their achievement of their goals.

The project is part of the international Sustainable Lifestyles Accelerator with household participants also from Denmark, Germany, Spain, Switzerland, Mexico and India. In Finland, households from 14 localities have participated in the Accelerator. The Sustainable Lifestyles Accelerator is coordinated by the German Wuppertal Institute and D-Mat Oy, Kone Foundation’s Saari Residence in Mynämäki and the Mynämäki municipality in Finland.