In 2019, Kone Foundation organised a Triennial of Community Art in Saari Manor and opened a new residence in Lauttasaari. The Foundation awarded EUR 32 million worth of support for art and research. The annual report offers an overview of the Foundation's 63rd year of operation.
Kone Foundation's grantees Heli Nygren, Kari Koivuranta & Irinta Tsitko. Photo: Aleksi Poutanen

In 2019, Kone Foundation awarded grants, prizes and donations totalling EUR 32 million. The Foundation organised an annual general call for grants, a special application round for environmentally responsible encounters and a call for residence grants for both the Saari Residence and Lauttasaari Manor.

The autumn’s general call for grants was held from 1 to 15 September 2019, with a total of 5,507 applications received. A total of EUR 30.3 million was awarded in grants to 294 individuals, working groups and organisations. Of the EUR 30.3 million granted, 62.5 per cent was awarded for research projects, 15.5 per cent for art projects, 21.7 per cent for projects combining art and research, and 0.3 per cent for other cultural projects. The award rate was 5.3 per cent of the total number of applications. More than 500 individual grantees were involved in the projects that were awarded a grant.

Alongside the 2019 autumn call for grants, a separate call was arranged for grantees already supported by the Foundation and for those arriving at the Saari Residence in 2020. The purpose of the latter call was to encourage people to engage in environmentally responsible encounters. The funding is awarded to support, for example, slow, ecologically sustainable travel and the arrangement of remote conferences. The application round resulted in awards of EUR 237,920 to a total of 28 initiatives. In the autumn, a call was organised for residencies at the Lauttasaari Manor. A total of 14 applications were received, three of which were awarded a residency and a grant, totalling EUR 33,200.

In the call for applications to the Saari Residence organised in March 2019, 29 artists and 13 working groups were selected out of 698 applications received from 71 countries. 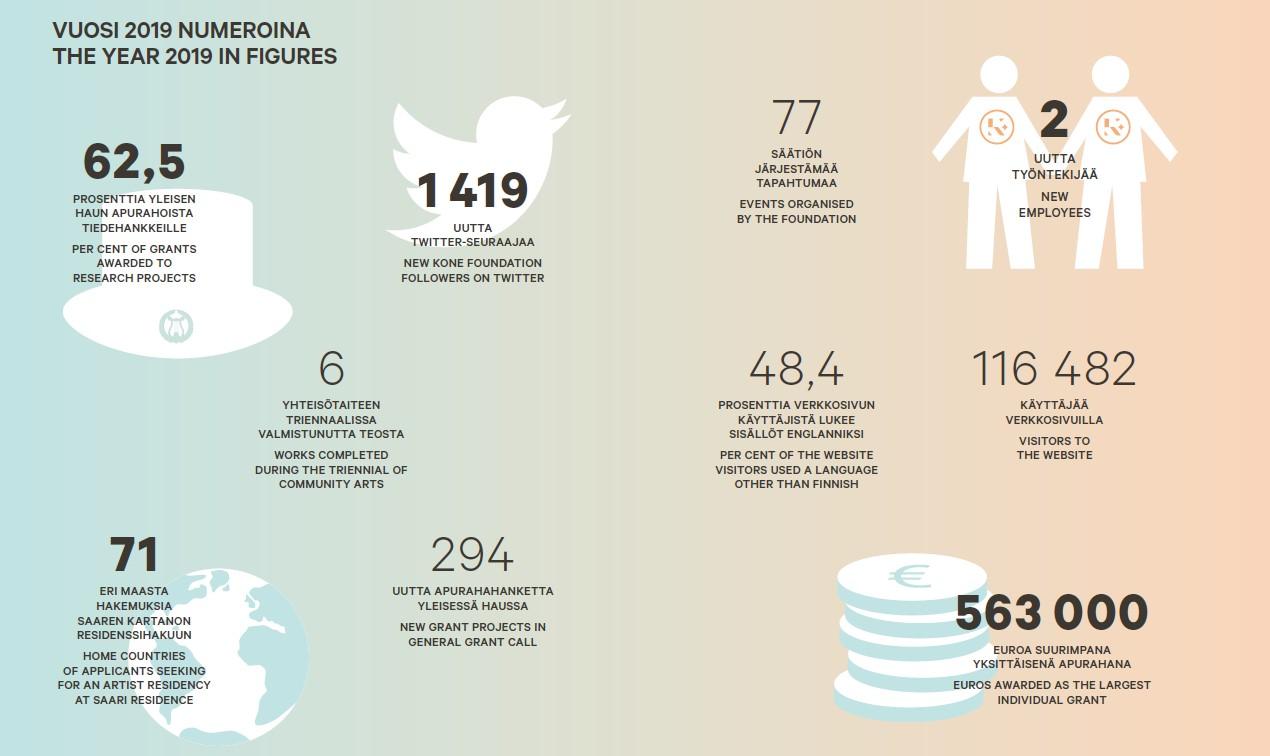 After getting a good start in settling in at Lauttasaari Manor the previous year, Kone Foundation continued making itself home there in 2019. In January, the new residency activities began at Lauttasaari Manor with the aim of helping Finnish artists and researchers to network, particularly with international contacts. The first guest to arrive for a residency was Silvana Bahia, a Brazilian researcher, filmmaker and activist, whose work promotes diversity in the technology industry.

The effectiveness of the Foundation grantees’ work was supported throughout the year through active communication and Apurahat+ activities: Over the year, eight Bold Makers events involving new concepts were organised, with the Foundation providing production and communication support and offering the use of the Lauttasaari Manor reception room for the events. We also sent out our Apurahat+ newsletters to grantees approximately once a month. During the year, the Foundation organised peer mentoring and communication training for grantees, as well as Moffice days, i.e. the opportunity to work communally in the Lauttasaari Manor’s reception room.

Building interaction and a sense of community with and between the various stakeholders of the Kone Foundation – above all its grantees – is important to the Foundation. Events aimed at our various stakeholders are a tangible means for promoting these aims. In 2019, the Foundation organised 50 events, with a total of 2,081 participants. Also, Saari Residence organised 27 events of its own, with a total of approximately 1,000 participants. 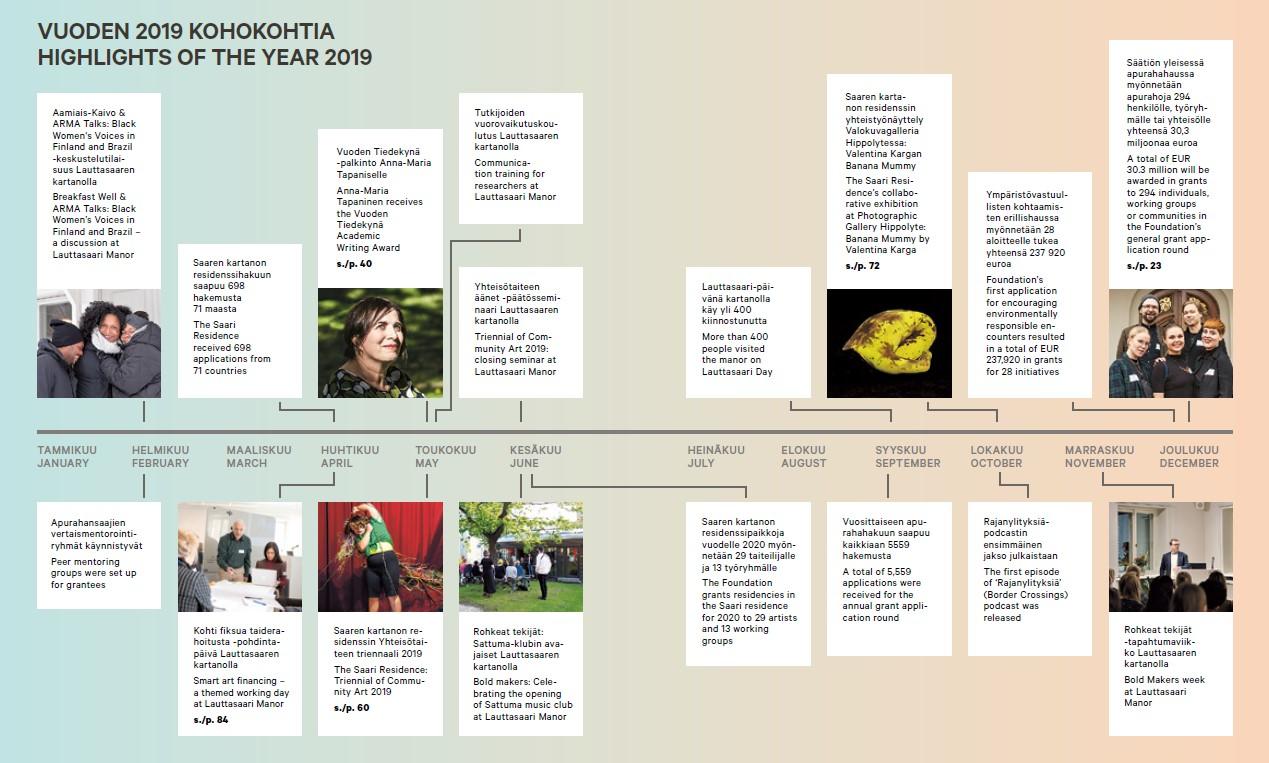 Saari Residence’s year was a celebration of community art

The revised application system for the artist residence for 2020 was opened in March, and subsequently 42 grants were awarded in the residency application round, totalling EUR 280,569. During 2019, 48 artists, researchers and groups of artists or researchers worked at the residence. American playwright and director Kevin Doyle continued as the Saari Invited Artist during the spring season, followed in the autumn by visual and performance artist Essi Kausalainen. In addition, Saari Residence continued its cooperation with Perpetuum Mobile through the Artist at Risk residency programme and in 2019 provided residencies for two artists via Perpetuum Mobile.

The highlights of 2019 were the Triennial of Community Art held in May and June, during which six works were completed in Mynämäki, Lempäälä and Helsinki. In addition to Saari Residence’s community artist Pia Bartsch, the triennial’s community artists included Heidi Hänninen, Kirsi Marie Liimatainen, Meri-Maija Näykki, Pauliina Pesonen and Anni Puuperä. The triennial focused on studying the processes and the various voices of community art. At the same time, it provided a unique opportunity to create concepts for and knowledge about community art through discussion. The triennial culminated in June in a two-day final seminar at the Lauttasaari Manor.

At the end of the year, several years of collaboration with the Photographic Gallery Hippolyte, run by the Association of Photographic Artists, came to an end. October 2019 saw the last collaborative exhibition at the gallery: Valentina Karga’s Banana Mummy. The exhibition included installations, photographs and videos in which the artist explored the cycle of energy and matter during an ecological crisis using various artistic experiments.