Stop and listen to the Foundation’s new grant recipients

Stop and listen to some of the Foundation’s new grant recipients, and you’ll hear what is going on in the world. But who and what have the researchers and artists of the soon-to-be-launched projects themselves been listening to, and intending to listen to as their work advances?
Sakari Höysniemi (on the left), Teemu Oivo, Olga Dovbysh, Elena Gorbacheva ja Veli-Pekka Tynkkynen are part of the work group in the FLOWISION project. Image: Mitro Härkönen

The Foundation’s new grant recipients have been listening to what is going on in the world right now, to how the past affects the present, and to how science and art are building new futures. Who and what signals have the researchers and artists who have received funding for their work been listening to as they prepared their projects? And what will they focus on listening to once those projects start?

In the Changing “neighbournesses” of Finland funding programme’s now-ending, last thematic grant call, Sustainable Development, Russia, and Finland, the biggest grant went to Associate Professor in Russian Environmental Studies Veli-Pekka Tynkkynen and the FLOWISION consortium’s project. The project’s researchers, journalists and documentary filmmakers are aiming to make the flows of energy and waste visible. In so doing, they say, it is possible to reveal the political dimension of resource flows and to compare practices in Finland, Russia and elsewhere.

“In the project we have also wanted to listen intently to petrocultures that are seen as detrimental for mitigating climate change, i.e. to the ways that using oil is part of society and of our way of living. Trump’s USA and Russia are examples of what, from a European viewpoint, are often seen as petrocultures. And yet 75% of EU energy consumption involves fossil fuels, i.e. is based on oil, gas and coal.

In energy-poor countries such as Finland imported energy is not visible in the same way as it is, for example, in Russia, where fossil-fuel energy is indigenous and where oil in many senses greases the wheels of society. Energy-related materialities are more visible there, and it is thus possible to view them from the perspective of political power, too.

Once the project has begun, we will carry one trying to listen to these positive signals in what is generally considered the ‘dark side’ of the energy sector. Such listening offers a possibility for making the dark side of petroculture brighter. We believe that listening to these signals can help us as we aim for an energy transition, i.e. when we try to replace fossil energy with renewables.” 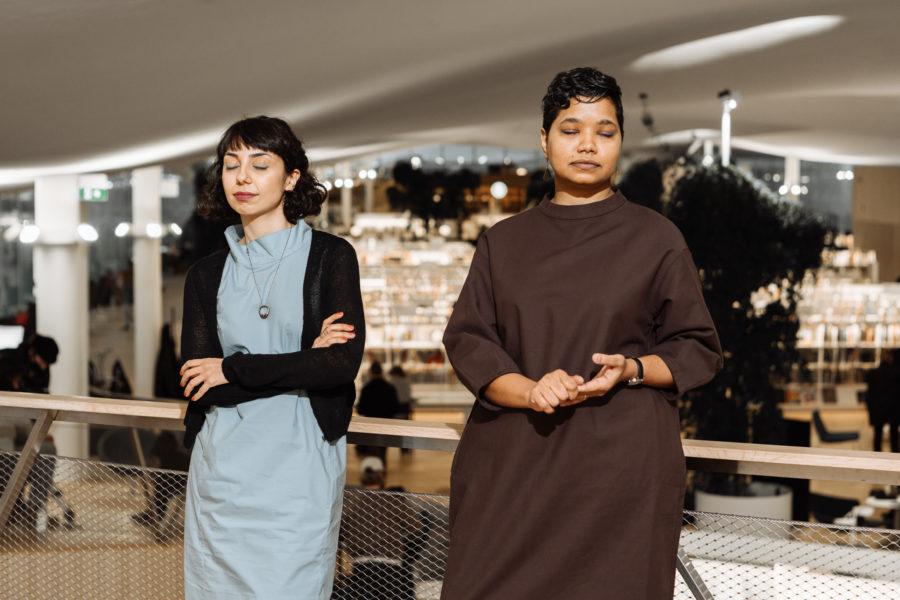 Listening to the art scene

According to the curator-artist duo Elham Rahmati and Vidha Saumya, Finnish cultural journalism does not adequately engage in discussion with contemporary art and its various phenomena. To fill this void they are founding a new monthly, English-language, online magazine: NO NIIN. With this platform, they also want to try out new ways of sharing ideas and conducting discussions: besides more established forms of cultural journalism, such as essays, exhibition reviews and interviews, the website publishes poetry, memes, visual essays and podcasts.

“Since our time in Finland, we have sensed a major gap in media coverage around the activities of contemporary art. In the words of Kaino Wennerstrand: “this lack of coverage reminds one of a family that lives together but doesn’t speak to each other”. Cultural journalism doesn’t sufficiently listen to the art scene, and the art scene’s discussions tend to often take place in small circles at exhibition openings – and not in the media, where anyone can take part. All that is left of an exhibition requiring months of work is a post on social media, which vanishes within a day.

Listening to the art scene means sharing not just observations, but also challenging it. In order for the art scene to remain intellectually alive we have to ask: How does it work? Who are the agents and authors shaping it? How will it change in the future? At present, Finland does not have an English-language publication focused on contemporary art, either. The need for a publication like NO NIIN has emerged in discussions and, being in English, the publication plays an important role in introducing the artists in Finland to a worldwide audience, helping them expand their practice and gain more work opportunities internationally. This will serve art audiences, but also support artists’ work.

We want to position the publication at the cusp of art, criticality and love. The themes we intend to focus on have also emerged through listening to insights and different perspectives on topics that art writers, artists and curators in Finland find urgent to address, such as art education, representation, love, and artistic labour amongst others.

Additionally, we want to create a space where members of different minority groups feel free to write and share their insights on what they find important. This is a significant aspect of our work, as we have observed, through our personal experiences, how minority groups are often pigeonholed by art institutions and cultural projects to express their thoughts and ideas only when it comes to matters related to their minority status. It is thoroughly frustrating to be made to feel that individuals belonging to minority groups have nothing more to offer beyond their trauma and struggles. NO NIIN is the space where individuals can perform any aspect of their multifaceted identities as they choose.” 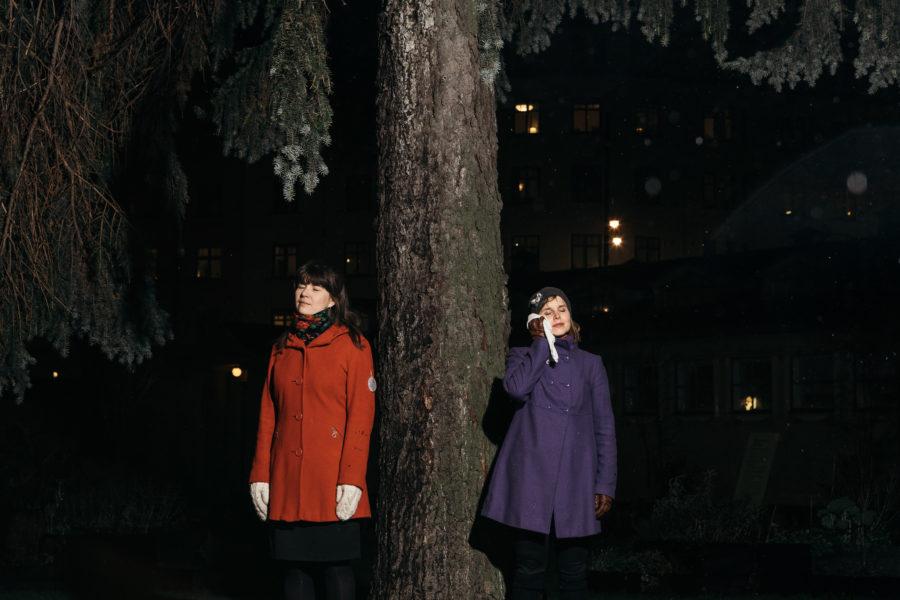 Folklorist Viliina Silvonen (on the left) and musician Emmi Kuittinen are one of the three working couples in the Tear Ducts project. Photo: Mitro Härkönen

In contemporary laments we hear a longing for communal grieving

Karelian laments were originally a ritual tradition expressing sadness and caring. At the core of traditional laments, apart from the lamenter’s own experiences and emotions, is a sense of community. The lamenter channels the feelings of an entire community. “Longing for community, for shared feelings can be recognized nowadays, for example, in the public, shared tears shed by celebrity artists in front of the TV cameras,” says the folklorist finalising her PhD thesis on folklore studies Viliina Silvonen.

Silvonen joins docent in ethnomusicology, Elina Hytönen-Ng, PhD, and the Kyynelkanavat (Tear Ducts) workgroup in a project in which artist-researcher working duos ask what needs do laments fulfil in today’s world. The project approaches the lamenting tradition from the viewpoint of the body, religiosity, community, and emotions.

“When we were devising the project, we were already listening to lamenters’ archived experiences of the tradition and practices of weeping aloud, and the laments, memories and thoughts about laments of the generation of evacuee lamenters.

On the other hand, we have also listened to contemporary laments: to the musicians, artists and amateurs who perform them. At the same time, we have heard the present-day pulse of longing for traditions, for cultural roots, that strengthen community. Underlying this can be heard today’s difficulty in admitting to and facing grief. As the project begins, we also intend to listen to new possibilities for lamenting.”

Also joining in the project, besides Hytönen-Ng and Silvonen, is researcher in Orthodox church music and culture, doctoral student Riikka Patrikainen. The researchers’ working partners in the project are the musicians specializing in the lament tradition Emilia Kallonen, Liisa Matveinen and Emmi Kuittinen. In addition to research, the project will also produce events for the public: open seminars, public-participation workshops, and artistic performances.

Listen to our grantees telling about their projects in their own words!