We received a total of 378 applications this year. The applications were of a high standard and we selected an exciting group for the residence periods in 2016. More than 60 per cent of the applications came from abroad, from a total of 39 different countries.
“I’m eagerly waiting to work at the Saari Residence. It is an unbelievable opportunity for me. I'll be able to forget the daily grind and just focus on my work,” Hosseini says. Photo: Riku Pihlanto

People working at the Saari Residence next year will include Silvia Hosseini, an essayist, David Frankovich, a performance artist, and Viides Sääty (the Fifth Estate) group.

Silvia Hosseini (b.1982) is a refreshing exception in the otherwise male-dominated genre of essays. At the Saari Residence she will work on her new collection which will challenge the conventions of essay literature.

Her new collection is founded on the following question: why do we usually write about issues that are generally considered positive, and why don’t we also write about bad, difficult or ethically questionable matters? She believes inferiority can be a more fruitful and more challenging point of departure than matters that our culture generally appreciates. At the same time she wants to understand what is so fascinating about the bad and why we need it.

“Finnish essays are often polemic and serious, even cynical. I want my collection to offer a new, fresh and humorous voice. I try to write essays that many kinds of readers find easy to approach. I want my essays to entertain, delight, move and inspire, both emotionally and intellectually. As a writer I find rhythm especially important: sentences must have a rhythm that supports the content and rhetoric of the text and that in itself pleases the reader,” Hosseini says.

“It would be interesting to write fun, entertaining essays. The collection examines novels, records, TV series and other cultural phenomena that are considered somehow inferior and artistically without merit and whose blandness, superficiality or questionable ideology are confusing. In my essays I approach these with a positive outlook. I don’t have an ironic camp attitude, as I write about what could be genuinely good, interesting, touching or moving in the inferior,” she says. 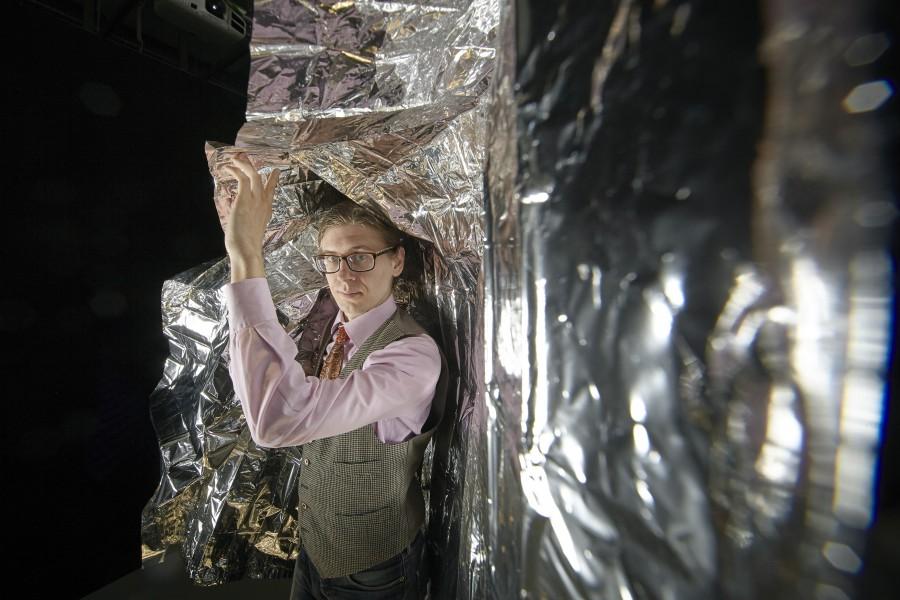 The Canadian performance artist David Frankovich (b. 1985) is studying in the Art University’s Theatre Academy’s Live Art and Performance Studies Master’s programme in Finland. He moved to Finland in August 2015.

Frankovich is a young and original performance artist who has lately worked on the themes of removal and invisibility that deal with bisexuality. He seeks a fresh and more collective approach to performance and queer performances based on turning the negative that has been made invisible into a positive presence and visibility. At the Residence he intends to develop an invisibility cloak that he will use in his new performances.

In the Saari Residence Frankovich works on his project called Invisibility Cloak. He will be making a ghillie suit out of a variety of materials, including rope, tarpaulins and, especially, space blankets – thin mylar sheets with a reflective coating – which are a material that he has been using in his work. This type of camouflage is usually used by hunters or snipers, but he is interested in queering how this camouflage is supposed to work through the materials he will be using and his approach to it.

– My process usually involves using very simple materials and actions in ways that produce some kind of excess, so my work hovers between being extremely simple and very over-the-top, he says.

– Recently, my work has been concerned with the bisexual invisibility, and I have been trying to approach this problem positively, by reappropriating it as the basis of a queer performance strategy,  I am excited to be able to continue this research, while also taking it in new directions, as this project is also something of a departure from work that I have done previously. I usually perform, but here I will be making an object. I hope to use it in future performances, but I am very interested to find out what impact the process of making this suit will have on my practice, Frankovich continues. 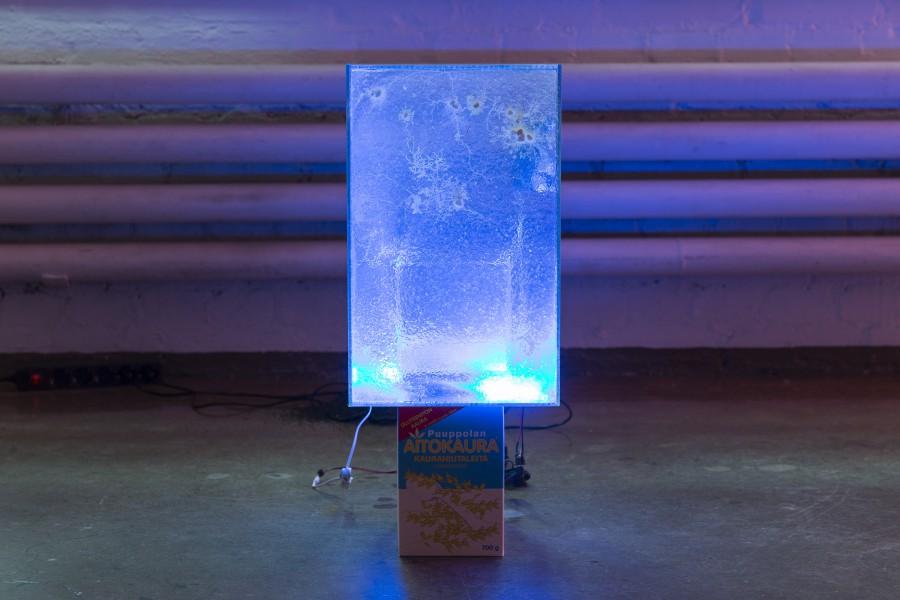 Viides sääty workgroup will be working in the Saari Residence next summer. The picture shows the Physarum polycephalum slime mould stored in an aquarium lined with agar in the workgroup member Jenna Sutela’s work. The arrangement, with its blue lights, looks like a souped-up home computer and refers to the future when slime moulds will process our data. Photo: Jenna Sutela

The multi-year and multidisciplinary project Viides sääty (Fifth Estate) will start next summer at the Saari Residence.

Viides sääty will examine the ideologies in Finland produced by industry, technology and the economy. The outcome of this will be art works, events and research. The project was launched by Jussi Koitela, Kimmo Modig and Jenna Sutela, who act as curators, writers and artists.

Viides sääty is a joint forum for art, economy, technology and politics, and an art work in its own right.

The working title, Viides sääty, comes from the title of a book by Karl-Erik Michelsen, which deals with the social activity of Finnish engineers. Michelsen claims that engineers have withdrawn from playing a social role and being ideologically active in Finland. This is especially relevant now that the Finnish Prime Minister is an engineer.

Context is usually an essential part of the interpretation and content of an artwork. Yet things like economic factors are often ignored. The Fifth Estate challenges its financiers to become part of the work. The three artists seek to create collisions between the operating cultures of different fields. Participants are invited to step outside of the safe-zones of their professions.

The Saari Residence offers a natural place for the project to start. The ground work, including interviews, meetings, surveys and research will take place throughout 2016, and possibly longer. The results will be seen in 2017–2018 at the earliest. The project’s multi-year form has been inspired by corporate culture.

The Saari Residence starting its ninth year of operations

The Saari Residence commenced its operations as a residence for artists and researchers in 2008, and so far 308 residency guests and groups have worked there, 296 of which have been individual artists or groups. The Residence offers its guests an opportunity to fully concentrate on their own work and projects. It also brings artists together at Saari Well to interact with each other.