International art collective Videokaffe worked at the Saari Residence during summer 2014. Through a spirit of collaboration, the group is able to accomplish things that are unfeasible when working alone. Besides their love of art and life, the group’s work is founded on friendship. Photo: Henrik Mikander

Art collective Videokaffe stayed at the Saari Residence for two hectic weeks back in the summer of 2014. During the group’s residency, the artists completed their works for the H2Ö festival and worked on the kinetic sculpture Transatlantic Dialogue for the Wassaic Project festival in the US.

The stay at the Residence held great significance to Videokaffe, as it was the first time that the entire group gathered to collaborate on their works. ”Our time at Saari gave us the possibility to come together and see how the group works. The pressure that we were under formed the heat that welded us together”, reminisces Videokaffe member Erno Pystynen.

Although most of its members work in Finland, the group is international in its composition. At present, the collective has ten members: Erno Pystynen, Olli Suorlahti, Heini Aho, Sami Pikkarainen and Jenny Mild from Finland, Sebastian Ziegler and Thomas Westphal from Germany, Mark Andreas and Andrew Demirjian from the US, and Stas Bags from Russia. The group also often invites visiting artists to assist or collaborate on exhibitions.

Shared elements in the work of Videokaffe’s members are kinetic art and the recycling and repurposing of old equipment and tools. The members work on both individual and collaborative projects. The guiding principle of their work is that through collaboration, things can be achieved that would be impossible to produce individually. Their cooperation emphasises the ideals of communal, voluntary work. “There is that spirit of working together until the late evening, having maybe a beer afterwards, and feeling that we have also deserved it. Often it’s many over hours and tiring. It creates a bond between the people”, explains Sebastian Ziegler.

Years of collaboration have strengthened the group’s mutual interaction and increased their understanding of each other’s work: “We have learned to work with each other in processes and to understand really the depth of each other’s work”, says Erno Pystynen. “Not even the skills but the thought process behind that.”The group’s collaboration has found its form. Videokaffe’s working method can be described as organic: at times, their schedule can be very hectic, followed by a more calm period. This is made possible by the chemistry between the members and their tendency for a shared excitement over new things. “If I think about the members, everyone has this portion of playful excitement”, describes Heini Aho. “We are really excited of different kinds of possibilities. ‘Let’s try that!’ That’s kind of a lovely energy.” Erno Pystynen and Olli Suorlahti confirm that the group’s work is founded not only on a love for art and life, but on the deep friendship between its members. 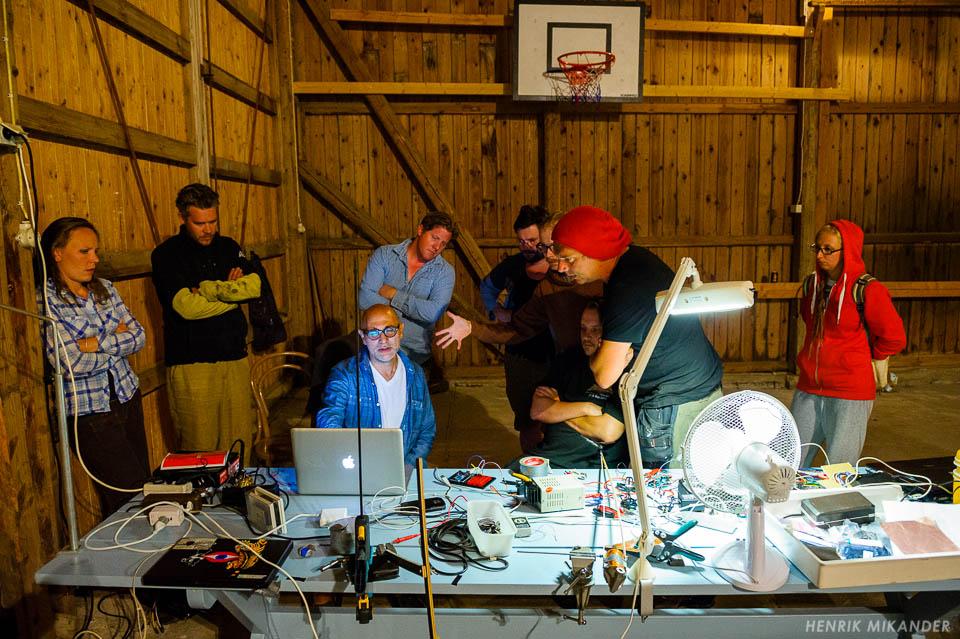 The practical aspects of collaboration often take up much of the group’s time: “Often when we talk about Videokaffe, it’s about how the group works. For example the current work of Videokaffe, The Workshop of the Future, trains us to communicate between long distances.” The members tell of their wish for a space that would meet the practical needs of the art collective, and provide opportunities for deeper discussions on their collaborative artworks and a truly shared working culture. The space could also host workshops and public events and provide a residence for visiting artists. At the same time, such a space would strengthen the process of collaboration: “When you work as a group in an open room, people will see all the steps and that they are imperfect. To work collaboratively gives you a chance to let loose, trust and relax”, says Heini Aho. In a shared workspace, imperfection is permitted and clumsiness can be embraced.

Videokaffe’s next exhibition will be held at gallery Oksasenkatu 11 in Helsinki on 9–15 April 2018. The exhibition opens on Monday, 9 April 2018 at 6 pm, see you there! The exhibition is part of the AAVE (Alternative Audiovisual Event) festival.