Pia Bartsch and Art Teacher Markku Karttunen headed a moss graffiti project at Mynämäki High School in the spring of 2012.

Seeing as there were two simultaneous Environment, Place and Space courses at the Mynämäki Highschool, moss graffiti was a perfect fit. As project leaders, we wanted to incorporate a discussion of a current topic within the creative process. We chose a regionally significant subject that genuinely related to the lives of the students.

Wolves are a constant topic of discussion in the region. They are the subject of strong opinions, both for and against. The course allowed the students to present their own view of the wolf through their work. We divided the wolf theme into seven different topics from which the student groups chose whichever one they wanted to use as a starting point for their work. The topics were: 1. Old Mynämäki wolf stories 2. The wolf debate 3. Old wolf-related sayings 4. The wolf in folklore 5. The wolf, a gregarious animal 6. The wolf in comics and literature  7. Any other wolf-related topic of choice.

Two different techniques were used in the project. The first technique involved mixing moss, water, yogurt, sugar and home-brewed beer in a blender to create a sort of mash. This mash was then used to paint the work of art directly onto a wall, and in theory, the moss would begin to grow within a few months.

The other technique involved cutting shapes from a mat of moss and gluing them onto the wall with a yogurt mixture.

Creating the works was interesting and productive. The advantage of compiling the work from the pieces of moss was that it was immediately visible. The works painted with the mash technique required patience since the moss begins to grow at a later stage (if it begins to grow…). 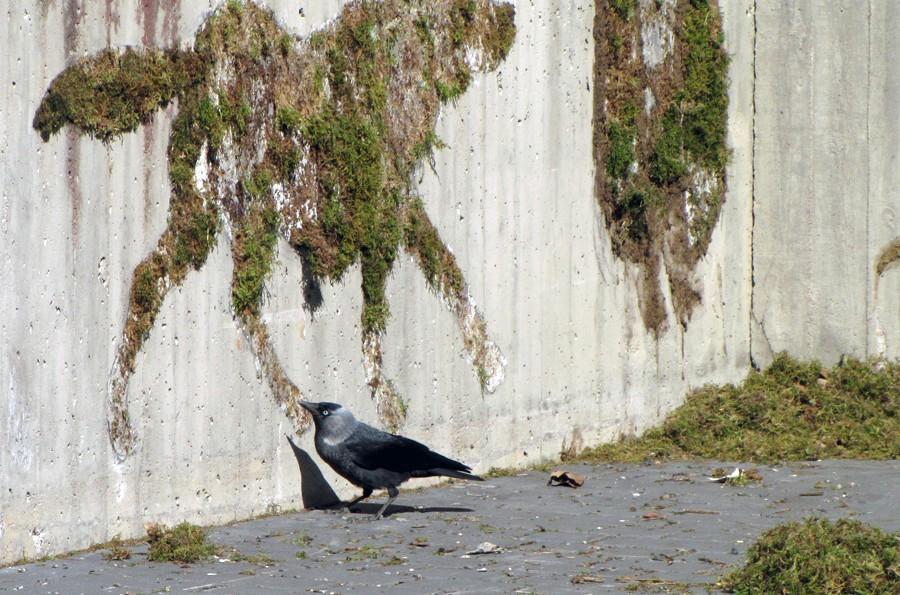 The biggest problem ended up being the jackdaws, magpies and other birds living in the surroundings of the nearby church. They considered the works of art very interesting and were constantly circling the area. The birds tore enthusiastically at the works made from the pieces of moss. At first, we thought the birds were just interested in the yogurt and other edible components of our eco-glue. The school’s biology teacher, however, noticed that the birds were in fact taking the moss from the works of art to their nests. We had unknowingly provided the birds with free, automatic nesting material.