Our new bold makers will delve into artificial tropical, game music, microbial decompososition of plastic, and fiction as a promoter of learning Finnish. Read what the makers themselves tell about their projects!
Researcher Viola Čapková: “Our research group thinks that fiction plays a central role in learning both Finnish and about Finnish culture.” Photo: Aleksi Poutanen

Fiction opens a window to language and culture

“Literature and language studies have always been one and the same for me. I studied Finnish and Finnish literature – as an adult, non-native speaker – at the Charles University of Prague where this was taken for granted. I focused on literature, though literature is, of course, language and much more: it is a key carrier of meaning in culture that opens a window to various societal phenomena.

Our research group thinks that fiction plays a central role in learning both Finnish and about Finnish culture. We are looking for a new way of engaging adults with im/migrant background in Finnish society by teaching them the language and culture through literature. The project includes both native and non-native Finnish speakers, and our work is based on interaction. We organise courses, workshops and book clubs, we test our previous research findings and formulate new research questions relating to literature and linguistics.”

Researcher Viola Čapková & working group: Fiction as a promoter of the Finnish language among adults with im/migrant background

“A few years ago, I began to notice the ‘tropical’ around me everywhere: dozens of products in stores with the word ‘tropical in their name, places staged to look tropical, plastic palm trees, Tropical Holiday shirts… And all this in Finland, far from the tropics. I started to ponder what tropical actually means here.

In my projects, I explore the artificial tropical and representations of the tropical. I mirror my observations against the theory of tropicality. Tropicality refers to an exoticising way of thinking, in which the tropics are seen as the environmentaö Other of the ‘Western’ world. As an artist, I use various media and feel that this topic must be examined from a variety of angles, both artistic and scientific. This subject has not been studied in Finland, although it is linked to major cultural and ecological issues, such as cultural and environmental appropriation, artificiality and sustainability.

My goal is to better understand both the tropical represented in Finland and our relationship to the tropics. I think it’s important to examine whether artificial places imitating dream environments will exist longer than actual tropical nature, and whether corals, for example, can be preserved in oceans rather than simply in aquariums.”

Artist Anna Sofia Sysser: Research and artistic work on the artificial ‘tropical’ and representations of the tropical

“Do you have memories of game music that you consider important or even cherish? These are the kinds of experiences we are investigating in our new project. Many of today’s adults have grown up playing digital games. It is not just a matter of entertainment; both playing and listening to music inevitably leave a mark on us.

Our project starts with the idea that memory of music incorporates elements of both gaming experience and meanings beyond the game. A memory of music may even act as a kind of anchor that allows a person to return to important events in their past. According to enactive theory, which we apply in our examination, games and music are not separate from us; instead, they are something our minds extend to.

Our multidisciplinary team collects material on game music memories that people find important to them by using both written narratives and interviews. The research group helps us to build a better understanding of the aesthetics of games and music as an activity embedded in everyday life.” 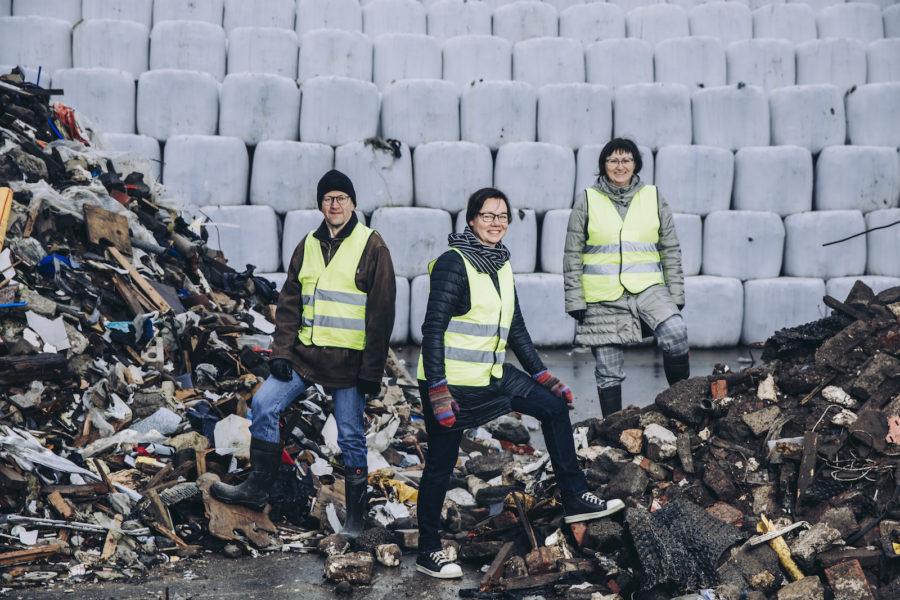 Researchers Kari Koivuranta, Heli Nygren and Irina Tsitko (on the right):”Indian cows eat plastic litter, sea turtles die after eating plastic and beaches are full of plastic waste. These are the visions that have inspired the creation of the project PlastBug.” Photo: Aleksi Poutanen

Microbial decompososition of plastic waste – the future of recycling?

“Indian cows eat plastic litter, sea turtles die after eating plastic and beaches are full of plastic waste. These are the visions that have inspired the creation of the project PlastBug.

Our idea is to embark on solving the problem of plastic waste in a completely new way. Our premise is the idea that different microbes and their enzymes require little energy to degrade plastic in fermentation containers. Since there does not exist an individual microbe that is capable of breaking down several different types of plastic, we intend to look for various different microbes that work on a range of plastic types, as well as for their enzymes. Once we have found enough of such microbes, we will be able to combine them to boost their decomposition capacity.

In their natural state, microbes and their enzymes degrade plastics slowly, which is why we intend to improve their decomposition capacity and speed using synthetic biology. In addition, our goal is to modify a microbial strain to give it the ability to degrade several different types of plastic at once.

We hope to see PlastBug become an alternative way of recycling plastics in the future.”