Culture trail opens up new perspectives on nature and art

At the beginning of June, a summer exhibition of contemporary art opened outdoors by the seaside in Mynämäki, Mietoinen. It is available to everyone walking on the Culture Trail. The artists behind the works of this site-specific exhibition in the landscape surrounding the Saari Residence are Ville Aalto, Elina Juopperi, Teemu Korpela and V. S. Luoma-aho. Come and explore the works of the artists who have worked at Saari Residence and were inspired by the Saari Manor and the nature surrounding it, as well as the area’s history. The sculptures, installations and poems in the exhibition, all located outdoors, interact subtly with the surrounding nature and landscape. The exhibition will run from 1 June to 31 August 2021.
Photo: Jussi Virkkumaa

From June to the end of August, the Culture Trail will display works of different types by artists who have worked at Saari Residence, providing artistic and cultural experiences to everyone walking in nature this summer. In summer 2021, the Culture Trail will feature works by visual artists Elina Juopperi and Teemu Korpela, author V. S. Luoma-aho and sound artist Ville Aalto. 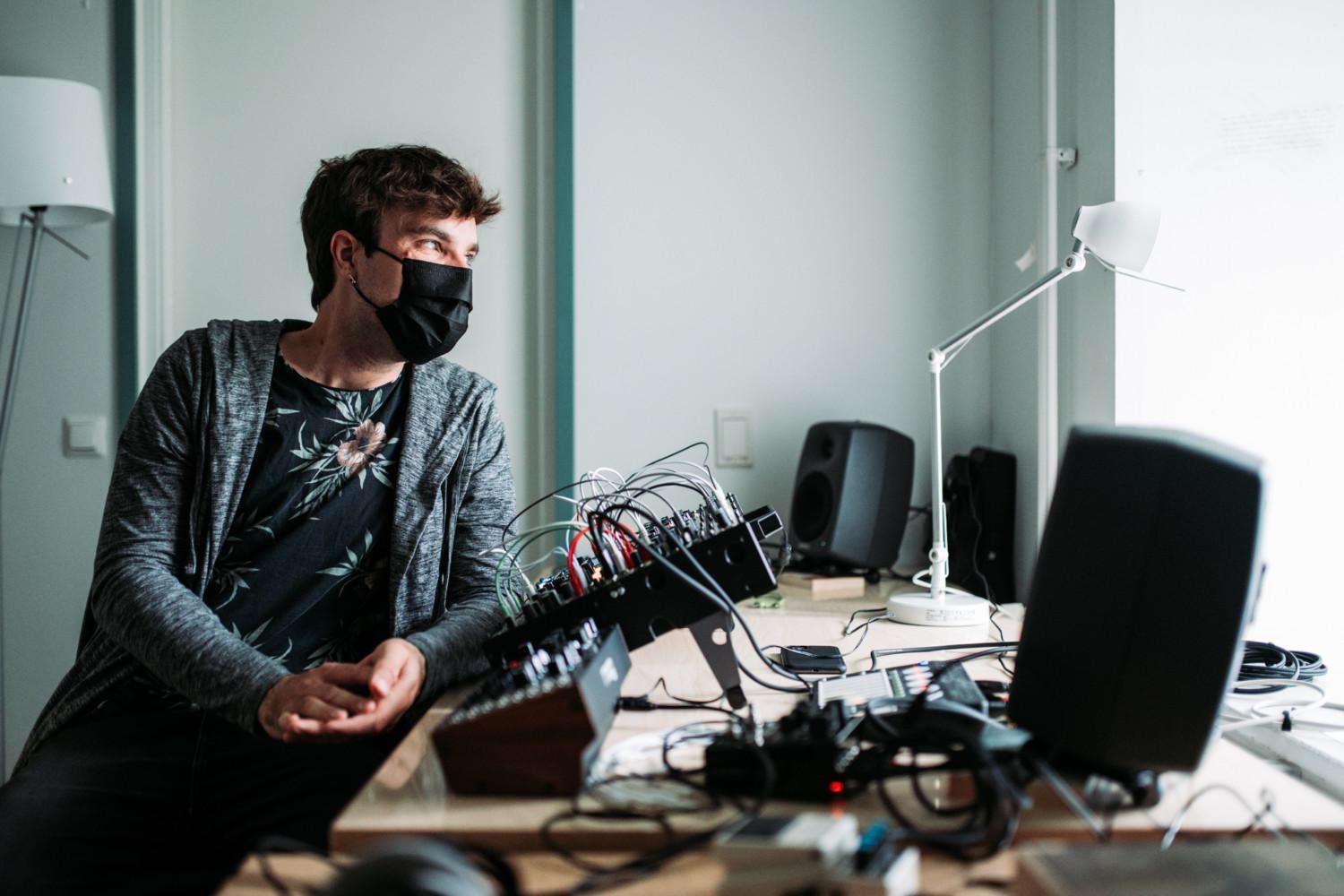 Ville Aalto and the sounds of biodiversity

One of the four works on the Culture Trail is a collaborative project between Saari Residence and Luomuliitto (the Association for Organic Farming), created by sound artist Ville Aalto. This spring, Aalto has been working on his audio piece on biodiversity together with the Kampars Organic Farm in Sauvo.

Exhibited on the Culture Trail, the work gives a voice, through art, to the questions and insights related to biodiversity. In recent years, Aalto has been pondering the ecological crisis, the accelerating technological development and the blurred boundary between natural and artificial. His series of works called Avian Electronics raises concerns about the state of affairs where people feel able to control, mould and destroy their environment without serious consequences but, at the same time, Aalto wants to inspire faith in the possibility of a balanced coexistence with the rest of nature.

“This piece has given me a new way to work in interaction with others. I worked together with the Kampars Organic Farm, and the development process has been a very thought-provoking and educational experience. It’s great to engage in dialogue with people whose everyday lives are so different to mine. Very few things seem as important right now as the ability of people from different starting points and realities to discuss things together and listen to each other,” Ville Aalto says.

Ville Aalto is a Helsinki-based sound artist. He works with audio synthesis and music technologies, producing artificial, electronic versions of nature sounds that you can hear on recordings, in concerts and sound installations. His works are a combination of audio art, electronic music and spatial sound.

For the past few years, Aalto has been working on the Avian Electronics project. At the heart of the multidisciplinary project lie synthetic birdsong and other artificial nature sounds, with electronic soundscapes and electronic music built around them. The works explore the concepts of ‘genuine’ and ‘artificial’, the relationship between humans and the rest of nature, and the threats and opportunities created by the ever-accelerating technological development. The project has produced several multi-channel sound installations, concerts and the recording Avian Electronics (2020). 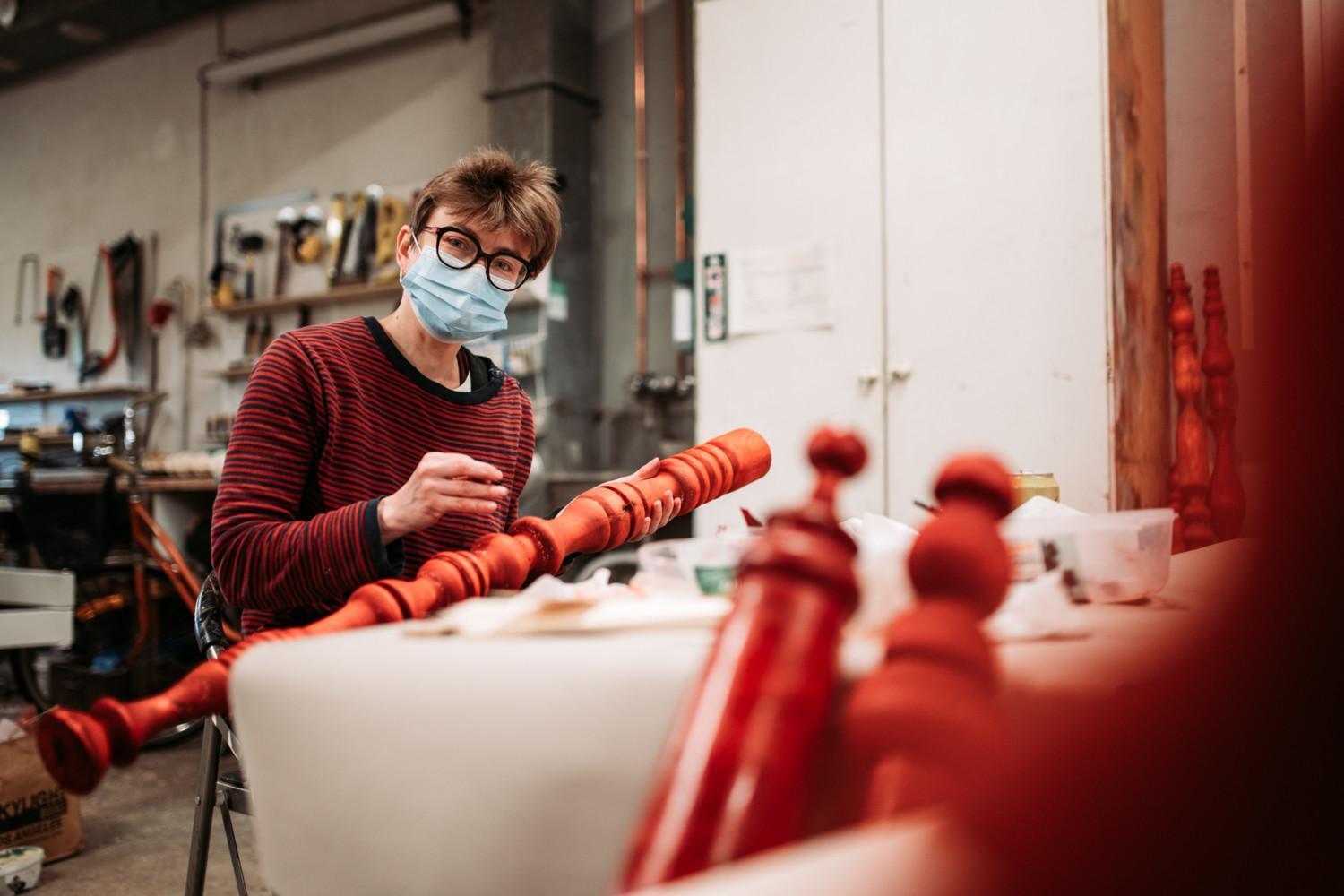 Visual artist Elina Juopperi is making a site-specific work of art for the Culture Trail which involves replacing some of the fence posts in the pastures with posts made by woodturning for the summer. Juopperi wanted to create a work that has a strong visual element and that transforms the scene of the Culture Trail without adding anything to the landscape: the amount of material remains the same and the work involves no tilling of the land. The piece emphasises the landscape and brings out the architecture of the surroundinga while leading the visitor along the path. The surroundings of the Culture Trail consist of both old cultivated, man-made landscapes and the nature reserve, highlighting two very different relationships with nature. With this work of art, Juopperi also wants to highlight handicraft traditions. It has been created in cooperation with Erkki Hämäläinen (Vehmaa), Asko Lindgren (Oulu), Mikko Saaristo (Mietoinen), Pekka Pentinkäinen (Turku), Lasse Lehtonen (Mynämäki) and Andrei Bakharev (Turku), who are cabinetmakers specialising in woodturning.

“I like creating works not intended for a museum or gallery. Personally, I feel that works created for nature have their own challenges. By this I mean that I don’t want to or am unable to create works for a landscape that subjugate or dominate nature: for example, I would not be able to pour a truckload of asphalt down a grassy slope. In this sense, I’m clearly a child of my time – given the current situation, my relationship with nature is protective or, at the very least, neutral. The smaller the mark I leave, the better,” Juopperi says.

Elina Juopperi is an artist who grew up by River Tornionjoki and graduated with a master’s degree in visual arts, i.e. a DNSEP diploma, from the Cergy National Graduate School of Art in Paris, where she lived for almost twenty years. As an artist, Juopperi is an observer of society who transfers her observations to her works – she sees herself as an artist who documents what she sees. In her works, the technique serves the idea: photography, collecting, drawing, walking and making installations are some of the methods she uses. Juopperi worked at the Saari Residence from January to February in 2021. 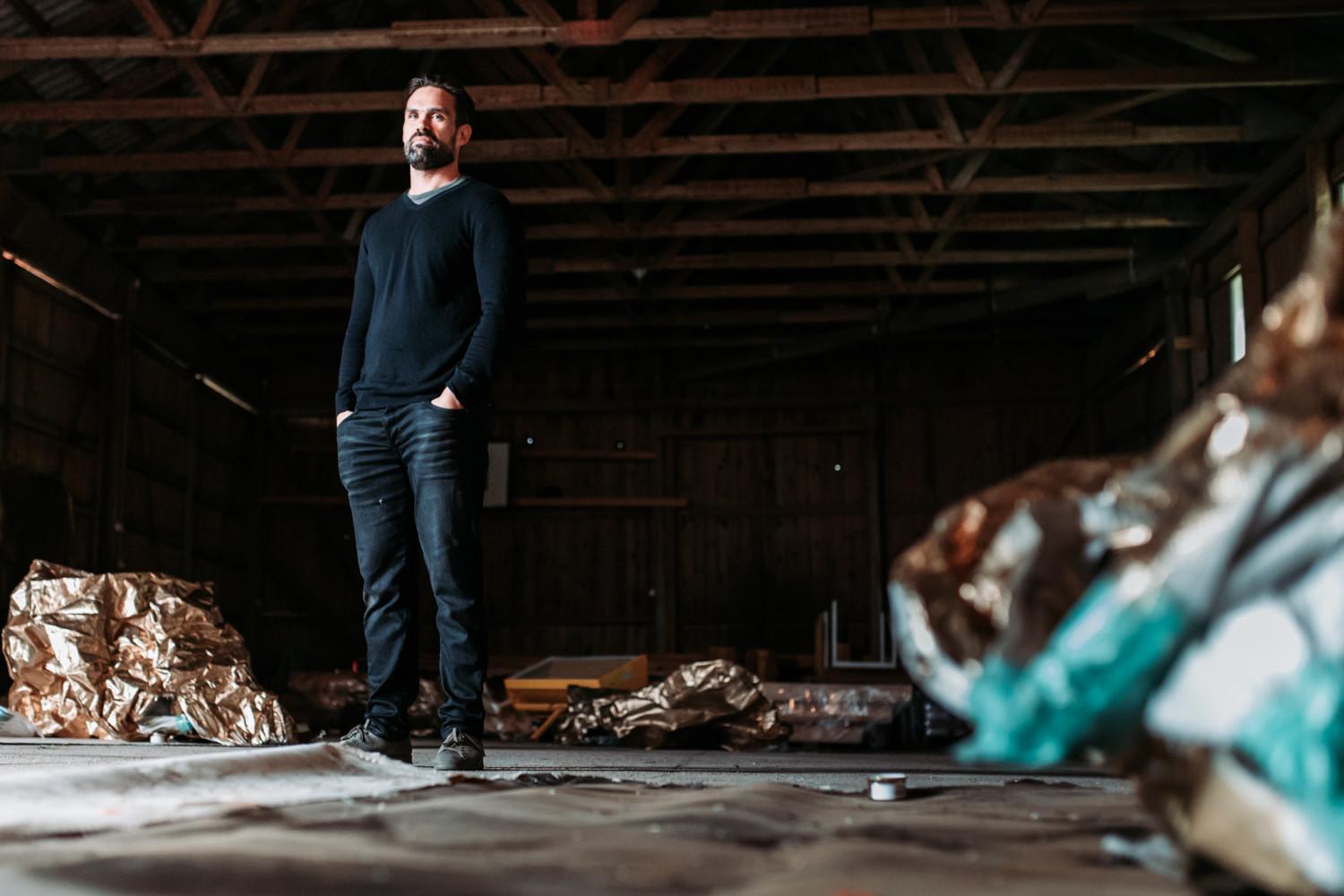 Teemu Korpela and the Golden calf in a seaside meadow

Visual artist Teemu Korpela’s work Golden Calf will be created from recycled materials in the meadow landscape of the Culture Trail.

“The title of the work refers to the biblical story, in which the Israelites began to worship golden idols in the wilderness and got into trouble. The intention of the work is not to make a direct reference to the Bible as such, but to the human tendency to create meaning in their lives in ways that have consequences we may not understand until it’s too late,” Korpela explains.

Teemu Korpela’s artistic expression is defined by a conceptual approach to art history and painting materials. The form his works take often originates in reflection on the relationship between the human experience and the world. Korpela has exhibited his art actively since 2005, and his works have been shown in Finland, Sweden, the USA, Britain, Japan, Latvia and Slovakia. 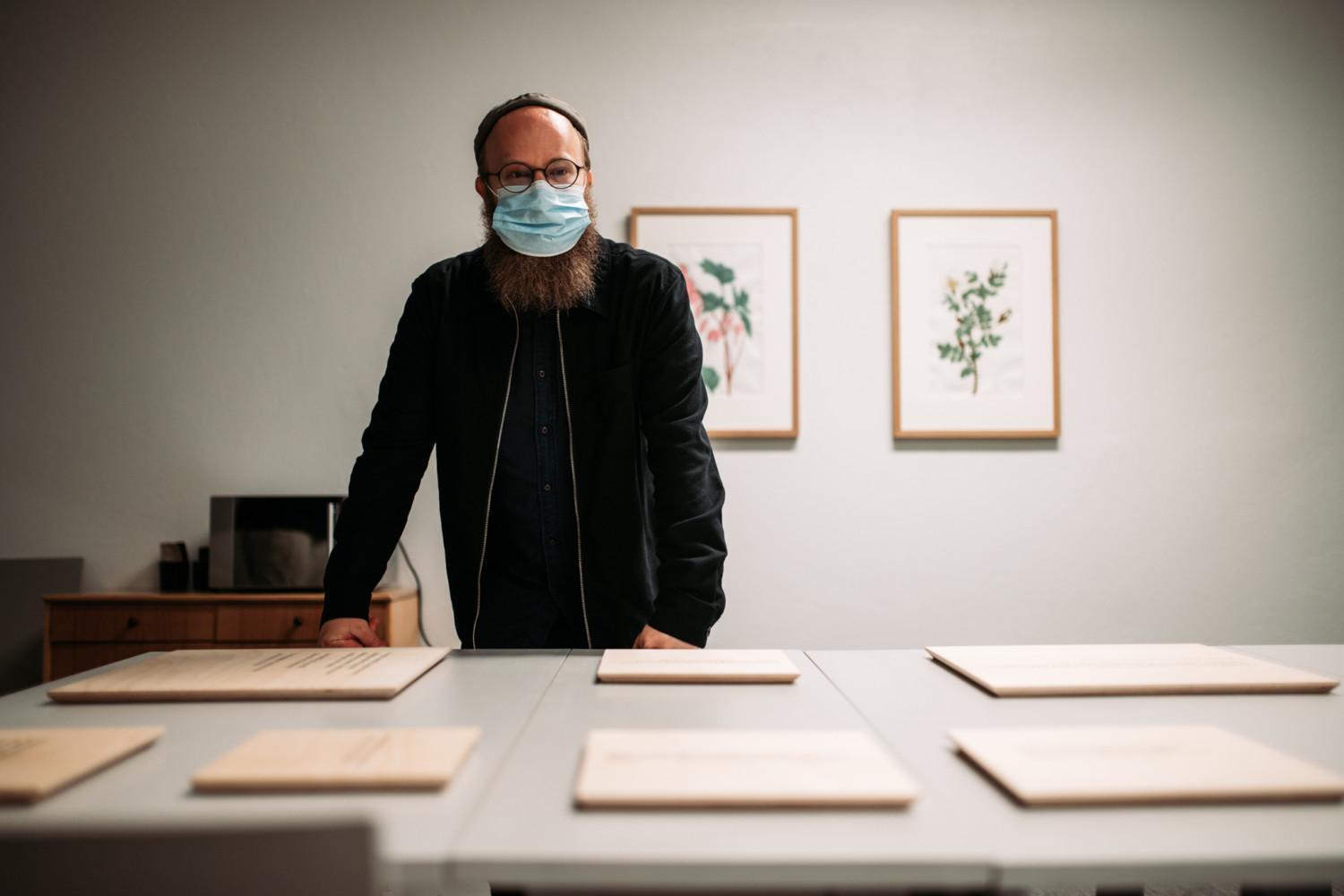 Visitors to the Culture Trail can also enjoy the landscape as it’s turned into literature by author V. S. Luoma-aho. His texts have been printed and attached to wooden boards at various points of the Culture Trail.

“My idea is about simplicity: the texts are like fragments of the landscape, partly diary-like memories from my own residency, intended as an intimate meeting place between the reader and the surrounding pastures. My idea, and also my practical experience of texts in nature, is that a dialogue in a natural environment between the reader, text and landscape multiplies the sensory experience. No matter how quiet it is, nature is always filled with all kinds of rustling and buzzing noises. This might also make it difficult to concentrate, which is why the text shouldn’t be very heavy or difficult to read. I think of this series as a little walking meditation: the texts are prisms or lenses through which to think and experience the landscape. Or you can always keep walking,” Luoma-aho says.

V. S. Luoma-aho is an author from Jyväskylä. He has studied literature and writing at the University of Jyväskylä and is a founding member and editor of the cooperative publishing company Poesia. Luoma-aho has published four poetry books – ‘Ruumiita’ (2009), ‘Remora’ (2011), ‘Kronologi’ (2014), ‘Mantra’ (2016) and ‘Safar’ (2020) – as well as a work of short prose called ‘Luonteita’ (2018), illustrated by Jaakko Pallasvuo. His first collection of short stories, ‘delete’ (2020), was published in February 2021. Luoma-aho has also translated into Finnish Sam Pink’s collection of short stories, ‘I Am Going to Clone Myself Then Kill the Clone and Eat It’ (2013). Luoma-aho worked at the Saari Residence from September to October 2019.