“In spring 2012, I carried out a community art project with thirteen retired women who live in Mietoinen and Askainen. My objective was to give a voice to the women of the Baby Boom generation.

I have tremendous respect for these women.

They have worked hard their entire lives. They have lived in a time when washing machines, maternity leaves, stand-ins, women’s rights and agricultural machinery were only making their way to the countryside. They have taken care of the cows, chickens, children and fields, cooked food and woven rugs, and shared their life’s joys and sorrows with friends and family. They have worked in politics and have pushed for social advancements.

Now they no longer participate in working life but have continued their hard work in gardens, fields and summer markets. They go swimming and to the gym, alone or with their grandchildren.

They are my idols.

The Flower Festival of the Saari Sirens

The Saari Sirens (Saaren Seireenit) and I based idea of the Flower Festival on the image of flowers in growth, from the sowing of the seed to their blossoming. The project consisted of three parts: introducing the women to the audience, a garden party during which flowers were planted in bags personally significant to the women, and an installation on the laundry room wall of the Saari Residence. 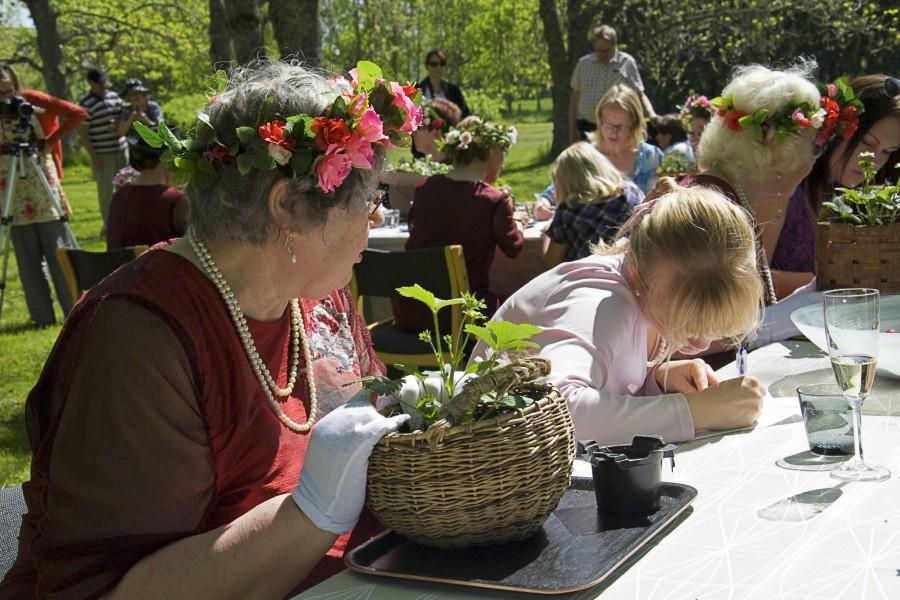 The project began by having silk evening dresses made for each of the women. The participants then sewed a picture of a person or thing that holds a special place in their hearts onto those dresses.

The finishing touches of the appliqués were embroidered.

Later, I met with each of the thirteen participants several times, and listened to and wrote down stories about their lives. Short stories were written based on the interviews, which I presented during the Festival while the women walked down a red carpet one by one to their tables.

In the garden, we raised a toast and Accordionist Timo-Juhani Kyllönen played for the women. After this tribute, the women were joined by someone close to them, who brought with them a bag and a flower to be planted. While planting the flowers, the Saari Seirens told a story about the bag and why it holds significance for them, which their guest wrote down.

After the Flower Festival, the flowering bags were hung on the laundry room wall of the Saari Residence for the summer to brighten the day of passers by.”