Summer is nearing its end and, for everyday life at the Saari Residence, this means that group residencies will end and individual residencies will begin at the start of September. The last group of summer 2018 was Webcoms united, a group consisting of international digital comic strip professionals, which worked at the Residence for two weeks in August, providing free guidance for people who want to get involved in the sector.
Photo: David Daneman

The international Webcoms united working group stayed at the Saari Residence for two weeks in August. During its residency period, the group worked on a free downloadable guidebook explaining how to earn money by making digital comic strips. When the book is finished, it will be available for everyone to download for free. It will be released in Helsinki Comics Festival in September.

The organiser of the Webcoms united project and the editor of the book is Finnish comic strip artist H-P Lehkonen. His job is to create romance comics for a publisher known as LINE Webtoon, the newest of which is Life Outside the Circle. The other members of the group are Megan McKay, who also works for LINE Webtoon, making the Doodle For Food series. Olivia Walch is primarily a university researcher, but she also makes a digital comic strip called Imogen Quest. Jose Rojas and Enzo Comics are working partners whose comic strip, Dungeon Construction co, is published on the Tapas service. David Daneman makes a series called The DaneMen for Tapas. Laura Romagnoli is an Italian university student whose comic strip, Average Adventures of an Average Girl, is available on Webtoon. Eelis Torvinen independently makes the series Summertime and BSandL. Sara Valta works in the Hiveworks collective on her series Alchemilla. Alex Norris is the well-known creator of the Webcomicname series. The project also includes Paju Ruotsalainen, who is an active member of the Finnish comic strip club and makes a comic strip in small magazine format. Ruotsalainen was involved as a volunteer cook who has enabled the others to focus on working without major interruptions.

The group has previously worked together at the Kansas City Planet Comicon, where the group jointly produced humorous comic strips with a marketing angle for the GoComics online service. They have a joint professional Facebook group, where the members can ask for help in difficult situations, such as contractual matters. The group does not have an official name (they humorously refer to each other as the “Buncha Nerds”), and Webcomics united is the name given to this individual project.

“The purpose of our Facebook group is to share information with other professionals. I noticed that there is a lot of really good information in the group, so I suggested to the others that we apply for the Saari Residence. I suggested making a free PDF book together to provide our knowledge to other people,” says H-P Lehkonen.

The peaceful working environment of the Saari Residence enabled a rapid, efficient pace of work, which surprised the authors of the book. Their original plan was to make a PDF-format guidebook with 25 pages, but more than 70 pages of information were created during the residency. The group also feels that the project completed at the Residence was more communal than the previous times they had worked together.

“The Saari Residence’s premises are amazing. We got all of the tables we could find and brought them into a huge studio, and we all worked together in one big room. Our group contains several Americans, and they were very impressed by the Finnish grants. It is funny to note that we had previously done sponsored projects in the USA where artistic freedom was not entirely in our own hands. That is why our American members cannot always believe that we really can carry out a project like this which, in our opinion, mostly benefits the comic strip sector, and we do not constantly need to think how we can please the marketing team of the Saari Residence or anything like that,” Lehkonen says.

The group’s aim is to provide help to other digital comic strip professionals. “Since the beginning, our network has been a place where people can ask for advice on questions that are troubling them. Now, we have been able to expand our goals and provide information in the form of our PDF book about setting out on a career in digital comic strips,” says Lehkonen.

In the future, the working group will continue to work together in one way or another. “We are already planning a larger meeting in the USA in 2019. We probably will not aim to do anything more than meet up with each other and visit Comic-Con. Other than that, we have not made any detailed plans for large joint projects in the future. We will continue working to support other professionals,” Lehkonen says. 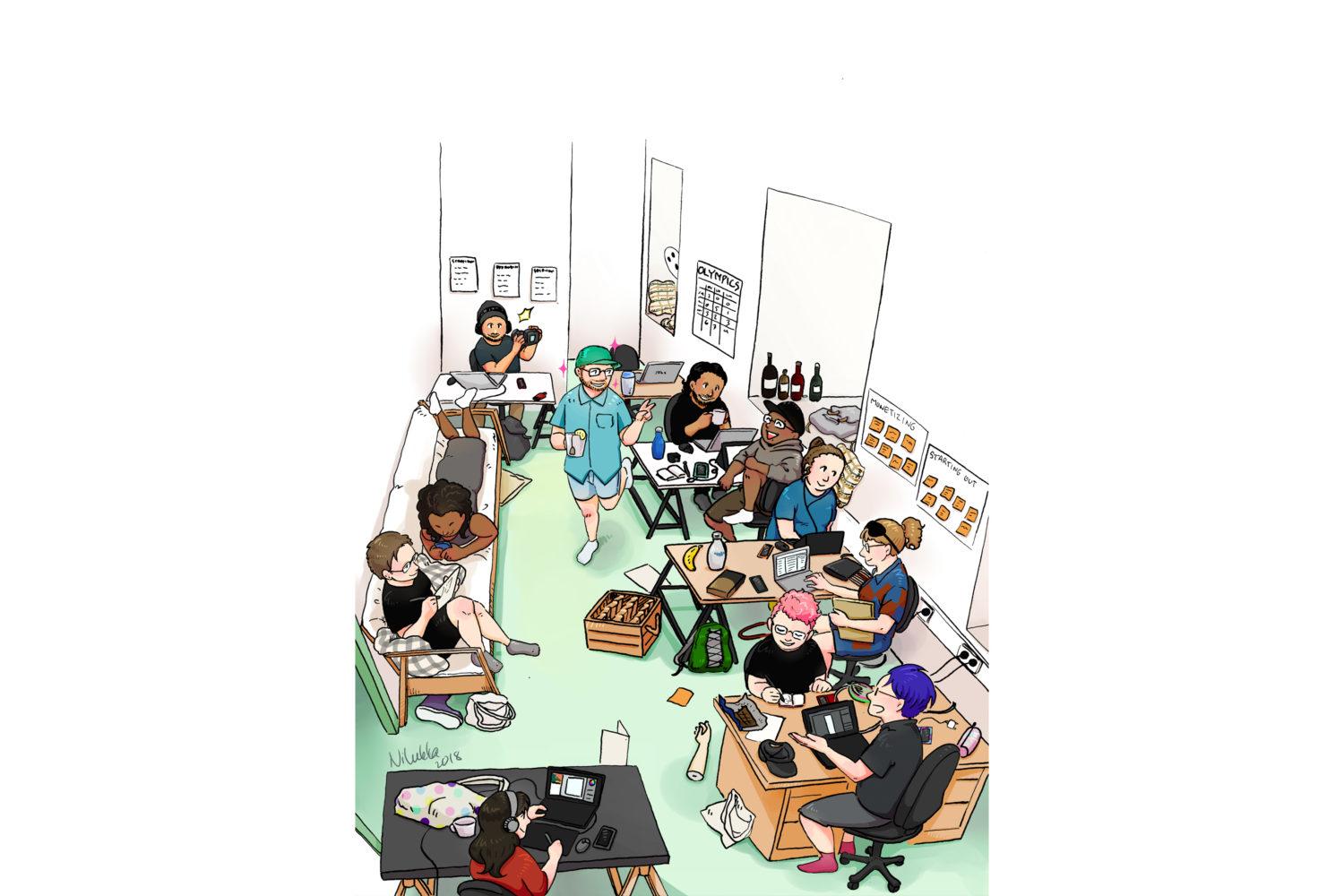 The cover of the forthcoming book is drawn by Eelis Torvinen.