Visitors from space and local rubbish

Artists working at the Saari Residence in January and February 2015 organised a rubbish collection day for some local kindergarten children in Pyhä during February.

The idea for the project came when author Alexandra “Sasha” Salmela was walking in an oak woodland near the Saari Residence and came upon a pile of rubbish there. She suggested to the other artists that they do a joint project connected to this. Working with the nearby kindergarten was then proposed. The other artists involved were Anaïs Héraud, Jaakko Pesonen, Joonas Rutanen and the Saari Residence’s Community Artist Pia Bartsch.

The story built around the rubbish collection day is about the arrival of aliens from outer space when their spaceship malfunctions, forcing them to make an emergency landing on Earth. At the Pyhä kindergarten the aliens found materials – the collected rubbish – with which to build a new spacecraft. 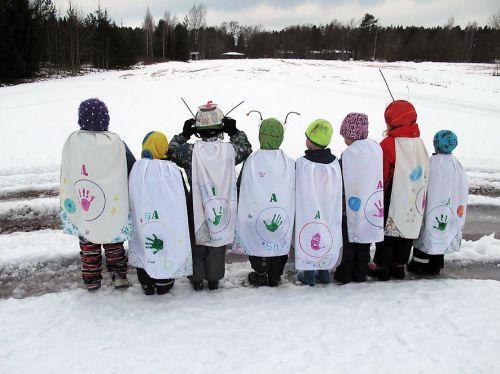 The children were major players in the project, working with the artists to plan and make costumes and “space accessories”, such as capes, goggles and helmets. Finally, the kids built a spaceship statue out of snow and rubbish.

Their enthusiasm spilled over to the next day too, when they built a spaceship out of chairs, blankets and building blocks and played at space travel.