During the restoration of the medieval basement of the Saari Manor’s main building, which spans several years, and a condition assessment, it became evident that there was microbial growth here and there in the intermediate floor between the basement and the first floor, as well as inadequate ventilation. The renovation of the Saari Manor’s main building began in the spring of 2020, and after charting the scope of the work needed, a major renovation has been carefully planned. The purpose of the renovation is to improve the quality of the indoor air in the building by, among other things, renewing the ventilation, repairing the damage to the floor and walls, and building a new floor on the first floor. At the same time, the building’s accessibility and functionality will be improved. During the renovation, the Saari Residence office has moved to the old stone barn and one of the larger apartments, and unfortunately this will cause minor changes to the arrangement of spaces during residencies.

Future work stages include the construction of support structures for the new floor and making new flooring from wide spruce planks. In addition, electrical installation, plumbing and pipe-laying will be needed, after which renovation and decoration of the interior can begin. We hope to be able to move back into the main building in July 2022.

Built in 1779, the main building of the Saari Manor in Mietoinen, Mynämäki, is protected by the Finnish Heritage Agency and is one of Finland’s built cultural heritage sites of national significance. The manor area is also protected by the Antiquities Act. The renovation under way is carried out showing care and respect for the old structures and in accordance with protection regulations.

Due to the special status of the Manor, the renovation involves a group of archaeologists who have repaired, among other things, the vaulted arch of its medieval cellar and cleared out the layers found under the floor. Led by archaeologist Kari Uotila, Ph.D., the team have found new information about the history of the Manor’s main building. 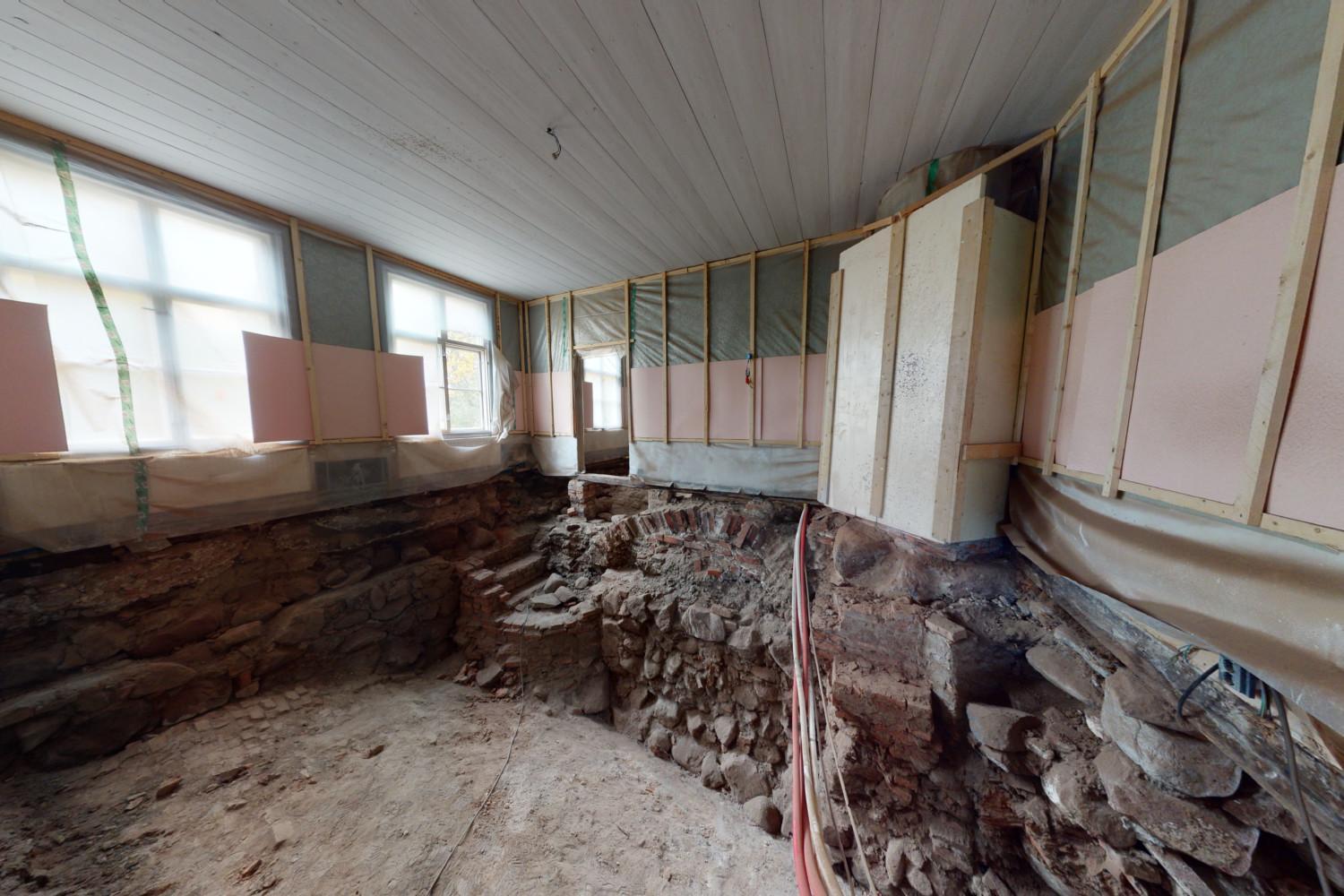 “During the summer and autumn of 2020, an interesting additional chapter in the history of the Saari Manor’s main building was discovered when the concrete floor on the first floor had to be removed due to the renovation of the main building.

Archaeological studies first revealed newer filled layers associated with the current building, but at a depth of half a metre, layers of carbon indicative of a fire from before that time were revealed, and under that was found an entire older timber structure piled at the edges of the cellar’s large brick barrel vaults.

Using the University of Helsinki’s Laboratory of Chronology, we were able to determine that the timber, which was almost completely decayed, dates to a period between 1645 and 1665. The major phase of the main building’s construction took place during the period when the Manor was occupied by Count Gustav Gustavsson of Vasaborg or his widow Anna Sophia von Wied-Runkel. Not much attention has been paid to this period before, as there are not many historical sources available relating to the construction.

In addition to the exceptional pile of timber remains, we discovered brick stove structures and a brick stairway related to the 17th-century construction phase. Before the current staircase, the brick stairway discovered now used to connect the building’s cellar with the floor above. The building elements discovered were completely new and previously unknown parts of the Manor’s main building that dates back to the 17th-century,” Uotila says.