Two artists from two different backgrounds and contexts meet up for a casual conversation one day and end up with an idea for an artistic research project connecting two different aspects of one story affecting their lives: phosphate.

Pekka Niskanen is a Finnish doctor of fine arts, a media artist and a video- and filmmaker. Mohamed Sleiman Labat is a poet and visual artist living and working in the Sahrawi refugee camps in the Hamada Desert. Over the course of one year of communication between Niskanen in Helsinki and Sleiman Labat in the desert, the artists started to develop the project. Both are keen conversationalists, heavily influenced by their surroundings and respective contexts. Sleiman Labat, for example, comes from a nomadic community where the oral tradition and spoken poetry have strong presence in everyday life.

The artists received a grant from Kone Foundation to the develop a project in the form of an artist residency, which allowed Sleiman Labat to come to Finland to work closely with Niskanen for four months. The project deals with phosphate and its effects on two vastly different environments: the Baltic Sea and Western Sahara. It explores the various layers of the issue through a number of artistic practices, drawing from Socially Engaged Arts, artistic research and field experience to gather information. 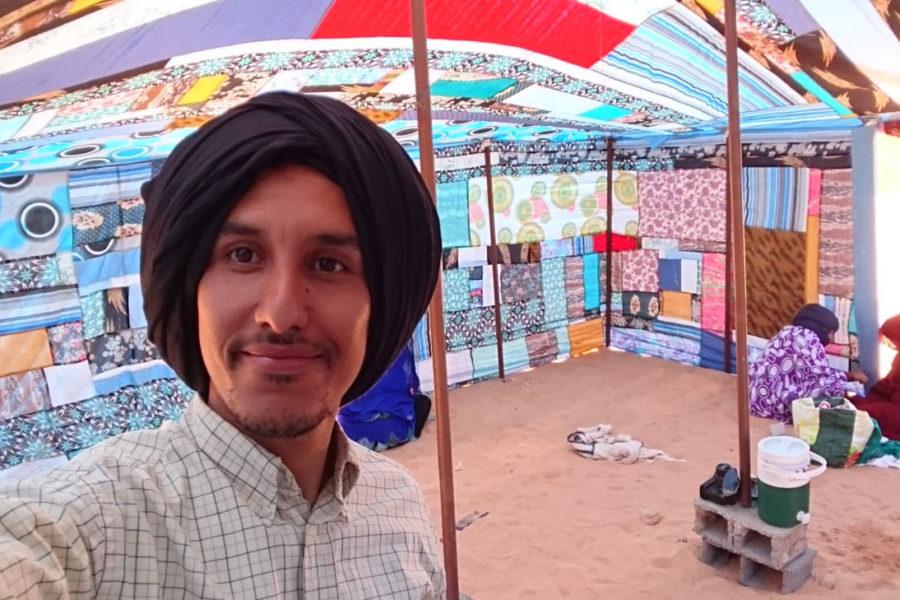 The Sahrawi tribal nomadic community inhabits Western Sahara, which is a major source of phosphate. In 1975 Morocco took control of the region, including its vital phosphate mines and coastline, thus launching a 16-year war between Morocco and the Sahrawi. Morocco built a 2,700-kilometre wall around the phosphate mines and other economically crucial areas; the wall was fortified with seven million antipersonnel landmines. Thousands of Sahrawi families were forced to escape and seek refuge in neighbouring Algeria. The wall and its landmines prevent the nomadic Sahrawi community from moving freely across the desert as they have done for millennia, and it has divided the land and its people, with many members caught on both sides of the wall, unable to reunite.

During the war, the Sahrawi settled in camps near Tindouf, Algeria. Sleiman Labat’s parents met in these camps, and that’s where he was born; he still lives and works there. A new generation is being born in the camps with little connection to their homeland and roots. However, Sleiman Labat and many other youths have gone to schools and universities and returned to the camps to support the community. Initiatives within the camps, spanning from arts and culture to engineering and family gardens, are changing life in the camps for the better.

Phosphate from Western Sahara has ended up in the Baltic Sea: various past shipments have made their way to Lithuania, Norway and Russia, but most of the Western Sahara phosphate is now shipped to North America, Australia, New Zealand and India. These mass phosphate extractions and exports are done without the consent of the Sahrawi people, the indigenous people of the Western Sahara. Furthermore, it prolongs the displacement of the Saharawi, now living in the refugee camps far from their homeland.

The processing of phosphate for fertilizers to be used by the farms in the Baltic Region as led to eutrophication of ocean waters, initiated when phosphorus reaches the sea in great amounts. As a result of both the pollution and climate change, blue algae has formed on the surface in recent years.

Sleiman Labat and Niskanen are using the residency to develop their art practice through a number of activities. They meet almost every day to discuss and develop a research paper they aim to submit in early October; the paper is one of a three they hope to write, and the current work in progress addresses the current lives of and situation the Saharawi face in the Hamada desert, as well as the need for a new narrative: What practices—social, artistic and ecological—are taking place in the camps? How much is the intergenerational dialogue affecting the Saharawi community’s identity and the cultural practices of its past and present—and even its future?

The articles we are authoring will address phosphate and its effects on the Baltic Sea and the desert. Among other question to address are, “How much of the phosphate is coming from the desert, and how ethical is modern food production?”

Sleiman Labat brought a nomadic tent from the Hamada desert, designed and hand-sewn by the women in the Samara camp. The tent serves as a space to interact with people from time to time. It’s somewhat challenging to adapt a Sahrawi tent to the Helsinki weather, however: it hardly rains in the desert, so that’s not much of a concern back home, but it is here. Sleiman Labat and Niskanen experimented with the tent at different events, using it as a moving sculpture and a space for people to discuss and share stories and poems as well as to simply experience the tent, a typical home of Sleiman Labat and his people. A Sahrawi tea ceremony, performed at different times in the tent, allowed people to witness the pace and rhythm of desert life. The discussion it creates has enriched the research, making the tent and tea ceremony effective tools for engaging people in discussion to and invite interaction around topics related to phosphate, food, the Baltic Sea and the desert. 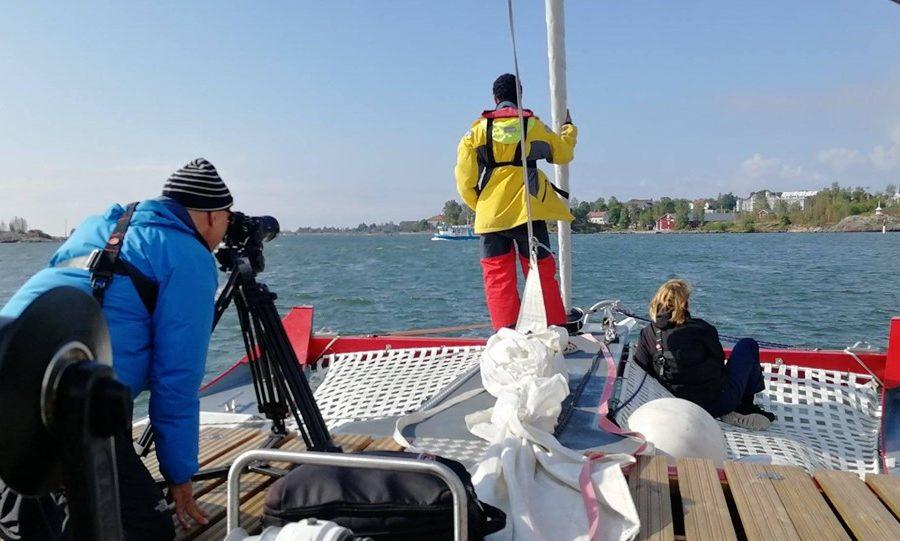 The researchers reached out to different institutions and organization from the Finnish art and scientific community for collaboration, and a series of meetings, presentations and activities took place 19–20 August, together with eight other artists and researchers. Sleiman Labat and Niskanen joined BioArt Society for a micro residency, sailing on the catamaran Godzilla as a floating research platform. It was the first time Sleiman Labat had ever sailed. The micro residency was also an opportunity to film and record under water, a unique opportunity to gather material for a future video art installation.

Meeting with the environmental institutions and organizations was an excellent opportunity to merge different disciplines of art and research. Scientists from Finnish environmental institute SYKE talked about dead zones at the bottom of the Baltic Sea—a desert under water. Sleiman Labat could not help but think about the poetics of the juxtaposition: a sea whose bottom is turning into a desert, and a desert deprived of its own phosphate yet blooming with thousands of family gardens planted by a community that never settled down to farm.

PhosFATE seeks to unfold the story of this precious mineral through such interconnected layers, evoking understanding of ecological practices, social change through community efforts, world politics and economics, the very food on our tables, and the everyday stories we tell.

Re-ecologizing theatre
At the Well blog