The Bill Burns Show was the second exhibition to result from the cooperation begun in year 2013 between the Photographic Gallery Hippolyte and the Saari Residence.
Meeting of the Board. PHOTO: BILL BURNS

Canadian Bill Burns stayed at the Saari Residence during November and December 2012. During his residency he worked on some of the items presented at the exhibition, but his main project was the preparation and writing of his book of reminiscences, and the watercolours for it. “The Saari residency made it possible for me to finish my new book, Hans Ulrich Obrist Hear Us, and conceive the work for this show,” says Burns.

Burns’ work usually touches on people’s complicated relationships with nature and art. “Because art is an international business and I travel a lot, I see bits of nature and bits of art all over the world. My current work makes appeals to important people in the art world to help me. The appeals are based on prayers from the Abrahamic tradition called litanies. I have made them as signs atop major art museums such as the Pompidou and the Guggenheim,” he explains. 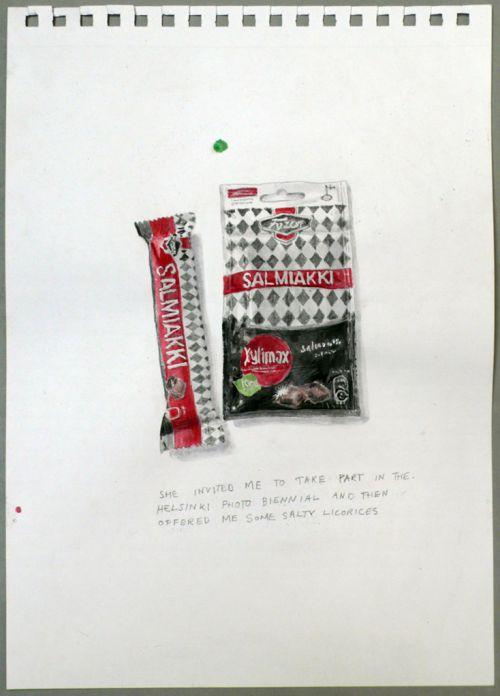 The Bill Burns Show was exhibited from 13th to the 31st of August 2014 and it included photographs, watercolours and scale models, plus a three-channel video work. The exhibition’s works illustrated Burns’ relationships with the international art world. “This work includes references to the art world people ‘who have helped me’ and ‘those who have wronged me’,” says Burns. The exhibition also pondered the ideas of the avant-garde and gived approving nods to artists such as William Burroughs and Joseph Bueys.

After the exhibition, Burns went to the Finnish countryside, where he worked on an electronic billboard project that allowed the litanies to be presented at a large scale.

Bill Burns has a Master of Arts (Fine Arts) degree from Goldsmiths’ College in London (1988), and his work has been shown at the MoMA in New York, the Stedelijk in Amsterdam, the Seoul Museum of Art in Korea, the ICA in London and the KW in Berlin, among other places. He has also participated in biennials in Havana and in Ushuaia, Argentina. Burns has published a number of books, the most recent of which are Three Books and an Audio CD about Plants and Animals and War (Verlag der Buchhandlung Walther König, Cologne, 2011) and Dogs and Boats and Airplanes told in the form of Ivan the Terrible (Space Poetry, Copenhagen, Denmark, 2011). He is also the artistic director of the Dogs and Boats and Airplanes Children’s Choir in Toronto.

Two discussion events were held in association with the exhibition:

To read more about the exhibition currently on at the Hippolyte, go to www.hippolyte.fi/bill-burns.