Saari Invited Artist Essi Kausalainen has almost completed her eight months of working in Mietoinen. In her spring letter, she ponders what a longer period of working at the residence means to an artist and her work, and how the pandemic that has touched the whole world affects an artist’s work.
Photo: Laura Cemin

Eight months can be an endless or insignificantly short period of time, depending on what you try to fit into it, who you ask and what you compare it to. It’s a period of two or three seasons depending on the location, the year and your interpretation. It’s the autumn and spring migration of birds, the transition into the dark season and back to the light. Eight months is the duration of the Saari Invited Artist’s residency, which for me is coming to an end. I knew in advance that this period would be a move towards something unknown and new. However, I could not have imagined the sheer depth and extent of the changes.

During my eight months as the Saari Invited Artist, I have worked on three overlapping performance-based works, whose main themes are coexistence and listening. In addition to the thematics, the works share my close collaboration with musicians and other performers: Nimeni on Monstera (My name is Monstera) is a performance for a wind quintet, two primates, text and textiles, while Thousand Times Yes is an experimental chamber opera for a soprano, chamber choir, audio tape and objects. Finally, Aquarium is part of a large scale modular performances titled Carnival of the Animals, which I am working on together with the Chicago-based company Every house has a door. In practice, working as the Invited Artist has meant directing, coordinating, discussing, listening, sewing and writing texts and notes.

In my performance based practice I have long explored the body as an open process shaped and made by its intimate interaction with the environment. I have been particularly fascinated by the subtle way in which the surrounding bodies – humans and other animals, plants, fungi, chemicals, minerals and others – shape each other. This spring, the porosity of our bodies has become visible in a frightening way. The pandemic travelling the world has made it abundantly clear how ostensible the boundary between the self and the other truly is. It has revealed the complex and intimate connections that draw us together. International collaboration and the performance form itself has turned in an instant from a self-evidence to a marvel. The coming premieres have sailed to the misty horizon of the future. As well as practicalities, the situation is inviting us to think about the thematics from a new perspective. The rough sea of uncertainty is forcing us to check our coordinates. 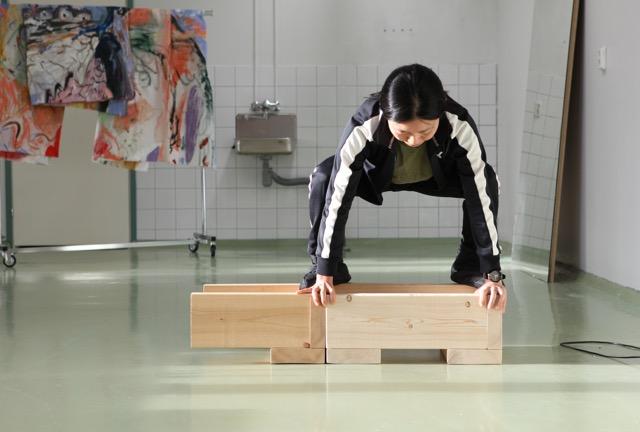 At the Saari Residence, the crisis going on in the outside world, despite its extensive scale, seems surprisingly distant. The expansive landscape of fields is unfailingly moving towards spring: birds arrive in large flocks, snakes slither and green shoots push through with undeniable force. Although my artist colleagues have had to depart one after the other, the trees and bushes are still here and the hares and deer follow their familiar paths. My everyday life has changed very little, which is largely due to the fact that an artist residency itself is a state of exception. In the case of the Saari Residence, it’s a sort of parallel reality, characterised by abundance and hospitality. A place where artistic work and research – and the people who engage in them – are appreciated, is a utopia for many artists and researchers. For a person who is used to constantly adapt and to adjust themselves to impossible conditions, the hospitality Saari offers is baffling. It takes time to get used to it, and when you do, it can be difficult to return to everyday life.

I was nervous about moving to the countryside of Mietoinen from Helsinki, although my previous residence in Saari had left a deep memory of happiness in my mind. In 2012, I had spent two months at Saari thinking about my art and reflecting on my agency. Looking back, those months saw earth-shaking things take place. I filmed five new video works and, along them, set a new direction for my art. I took a step from working alone towards working together and opened the door to collaboration with plants. I dug myself out of a professional dead end characterised by a lack of vision and joy. Despite all this, I was hesitant about returning to Saari. Eight months surrounded by a Finnish landscape of fields is a long time for a city dweller. I was missing my friends even before I had left them, and all my familiar routines and places: yoga classes, tearooms, swimming pools and libraries. Luckily enough, my artist spouse was able to accompany me to witness the beauty of this landscape and its subtle changes.

As is often the case, old routines are replaced by new ones and you discover new ways of spending time with your friends. Life mutates. Eight months is long enough for that. The change of workspaces and colleagues every two months has brought out new aspects in my way of working, and in myself. The large studios and the vastness of the landscape have also opened up space for thinking. Intensive work periods with working groups have instilled projects not only with an intensity, but a whole new kind of humour and lightness. The quiet immovability of the surrounding fields and the unbroken focus have shown me how deep you can get lost into your thoughts. My understanding of time has changed many times during my residency and my connection to the weather, the seasons and the light has become more sensitive. I’ve learned to recognize birds by their song.

In addition to my own work partners, I have enjoyed the company of the other residents. It has been fascinating to observe how each group creates their own conversation and dynamics. Every one of the four groups I have been privileged to share my residency with has nourished me in their own, surprising way. I never cease to be amazed by the diversity of ways of thinking and working. Yet despite the differences, I had experiences of profound encounters and sharing with every one of the groups. We meditated, exercised, watched movies, drank cocktails, knitted and cooked together. We went grocery shopping at a local shop every week, walked in the dark and spent Christmas together. For eight months these groups of residents were my extended family.

In my artistic work, I am interested in the body as a sense organism, in how other beings and things touch me, how they are present in me and how they feel. I’m interested in the way experience and understanding of ‘the self’ and ‘the other’ can expand in such encounters. In connection with this experience, I have reflected on the physical phenomenon of resonance. The state of resonance occurs when a body is exposed to the frequency of an outside force. When systems, such as magnetic fields, machines, structures or bodies share the same, or almost the same, frequency of natural vibration, the result is resonance. The encounter magnifies the vibration of the bodies, turning it into a particularly large motion, whose power can be destructive or nurturing in equal measure. The human ear recognises certain vibration frequencies as harmonies, but sound is also touch and motion. It moves through matter in waves, like water or slime, binding bodies together in distance. During my residency at Saari, I have begun to link resonance not only to sound and touch, but to existence through the experience of hospitality. I have observed how generosity and sharing can grow and expand between beings, like resonance. Hospitality is not just a luxury or surplus, it is a deeply enabling force and an attitude of life. When a person feels appreciated and cared for, their capacity to treat others with respect increases.

When I moved to Saari last autumn, I knew to expect a change. The current distortion in the surrounding society is so dramatic that it overshadows the quiet, personal movement. I recognise a transition in myself and the structures of my work, but I won’t understand its scope until later, with some distance. My previous residency at Saari was followed by an opening up to work in cooperation with plants and other beings. This time, to my surprise, I find myself creating works for the stage and telling stories that focus on a human instead of a plant or fungus. I’m sewing soft stages, opening harmonies and looking for a new language in closer and more diverse collaboration with others than ever. The importance of sharing space and time is growing and my way of working is expanding. Contrary to my expectations, I didn’t become a winter swimmer with a passion for fermentation, at least not yet. Nor did I read all my books, and I am still not good at being idle. But I did learn to appreciate the beauty of the landscape of fields.

Thanks to my companions and collaborators, the residence’s enclosing structure opened itself up to the world and prevented me from getting lost within myself. Therefore it feels essential to mention here the colleagues who worked with me at Saari. My affection and admiration for them, and the joy I felt with them is beyond description.

And Elina Suoyrjö as my writing partner.

Of course, we can’t forget the almost all-powerful staff at the Saari Residence (just look at the goddess-like photo gallery at the bottom of the website), as well as all the lovely local moss, lichen and trees, bushes, twigs and other vegetation, stones and the entire natural population that has delighted, comforted and encouraged me over the past eight months. I will miss you when I continue my work with the working groups elsewhere.

Essi Kausalainen (Helsinki) is a performance and visual artist who bases her artistic practice on the sensuous capacity of the body and its philosophic and ethical materiality. In her work, the body is approached as an open ended process made in, and shaped by, the complex relations with other beings, situations and environments. With the help of fabulation and play, Kausalainen aims to escape the hierarchical and linear ways of thinking and operating.
Related
Long reads