The 2018 Summer Well gathered at the Saari Manor on a weekend of July, 13.–15.7., invited by our alumnus, artist and researcher mirko nikolić. The matter of concern of this year’s Summer Well was rethinking the boundary-making between nonlife and life in the context of artistic practices that cross the boundaries between art, science and philosophy. Eight artists and researchers of various genealogies and positionings spent the extended weekend at the manor, discussing e.g. materiality and discursivity of tail(ing)s, slash and burn -agriculture, breathing, and stromatolites.
Monika Bakke, Essi Kausalainen, Leena Kela, Taru Elfving, Petri Berndtson, Marietta Radomska, Kira O'Reilly and mirko nikolić visiting Tummamäki nature trail. Photo: Silja Pasila

‘If we focus on the difference between Life and Nonlife we won’t be tempted to wonder what if the miracle was not Life, the emergence of a thing with new forms and agencies of potentiality, but Nonlife, a form of existence that had the potential not merely to be denuded of life but to produce what it is not, namely Life? Nonlife has the power to self-organise or not, to become Life or not. In this case, a zero-degree form of intention is the source of all intention. The inert is the truth of life, not its horror.’

‘A life is everywhere, in all the moments that a given living subject goes through and that are measured by given lived objects: an immanent life carrying with it the events or singularities that are merely actualised in subjects and objects. … It seems that a singular life might do without any individuality…’

As it often does among those who are interested in posthumanism in one way or another, things began with Rosi Braidotti. This time it wasn’t with her writings explicitly, but with Braidotti’s injunction that critical theorists/practitioners should meet and discuss in non-conventional settings with liquid conversation companions. Following this advice, sometime in the fall of 2017, writer and curator, and artistic director of CAA Contemporary Art Archipelago, Taru Elfving, performance artist Essi Kausalainen, artist and Course Leader of MA in Ecology and Contemporary Art (University of Helsinki) Kira O’Reilly and mirko nikolić started an informal reading/discussion group in Helsinki, under the codename G&T Reading Group, loosely centred on more-than-human problematics in contemporary art and performance. In the same period, mirko received an invite to assemble and organise the Saari Well in the summer of 2018. Consequently, the extended weekend at the manor was thought of as a multispecies retreat with the leitmotif of dissolving life/nonlife equation and dualism. Through an itinerant round of invitations that spun from the core group, the group was eventually expanded with: Associate Professor at the Philosophy Department at Adam Mickiewicz University (Poznan) Monika Bakke with interest in contemporary art and aesthetics in relation to posthumanism and postanthropocentrism; PhD in philosophy Petri Berndtson with particular interest in breathing, co-editor of recent collection Atmospheres of Breathing; feminist philosopher and transdisciplinary gender studies scholar Marietta Radomska, currently a Postdoc at Linköping University and a Visiting Postdoctoral Researcher at University of Helsinki; and visual artist Åsa Sonjasdotter (Berlin), a founding member of The Neighbourhood Academy, previously a professor at Tromsø Academy of Contemporary Art in Tromsø – an institution she took part of establishing in 2007 – and awardee of the COAL prize for environmental art in 2014. The group was joined by two hosts: performance artist, artistic co-director of New Performance Turku festival and the director of Saari Residence, Leena Kela; and coordinator of the 10th anniversary of Saari, Silja Pasila. 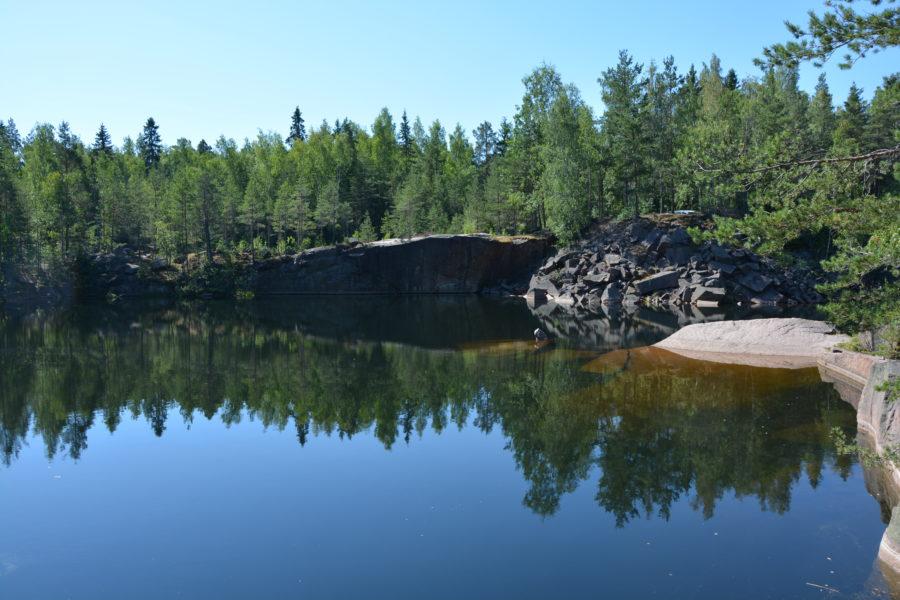 The invitations were sent out in the form of the two above-cited quotations from Elizabeth Povinelli and Gilles Deleuze, and the participants were invited to bring a multispecies story of in/organic collaboration to Saari Well. The ethos of the retreat was not so much to produce new knowledge, but to take time and space to reproduce in queer/feminist spirit, by eating, walking, swimming and talking, together with other human and amongst other-than-human agencies and presences. Correspondingly, the days took shape organically, discussions were had in the shadows of the trees, at the cliffs of Mietoinen Bay, and other locations around the manor and its surroundings, including the trips to the Saari beach and to the nature reserve. Shared conversations were at times guided by some of the participants, partly in free flow, as they ranged between various topics. There was talk of geology which, before becoming an imperial science, used to be a radical minor science because it busied itself with lifeless rocks, and not the human existence. There was story-telling about cosmic dust which reminds us of that that we are not isolated from the space (- by one estimate, as much as 40,000 tons of cosmic dust reaches the Earth’s surface every year!). There was discussion of dissolving binaries, of complexity of (de-)definitions, of different kinds of paradigms to perceive time beyond the human. There was talk of re(con)figuring the boundaries between nature and culture, how they are bound together and apart. There was storying about an island in Turku archipelago which was a sanatorium, now an environmental science station, a holiday resort and a hotspot for ticks research, invoking complex redefining of living together. There was talk of intentional practices of breathing and tuning into the environment, as the wind blew from the sea.  There was discussion about the humanizing of bacteria, and of how problematic it is to define ‘we’ in the context of laboratory experimentation and at this historical juncture. There was talk about stromatolites living in Lake Thetis in West Australia. And more. 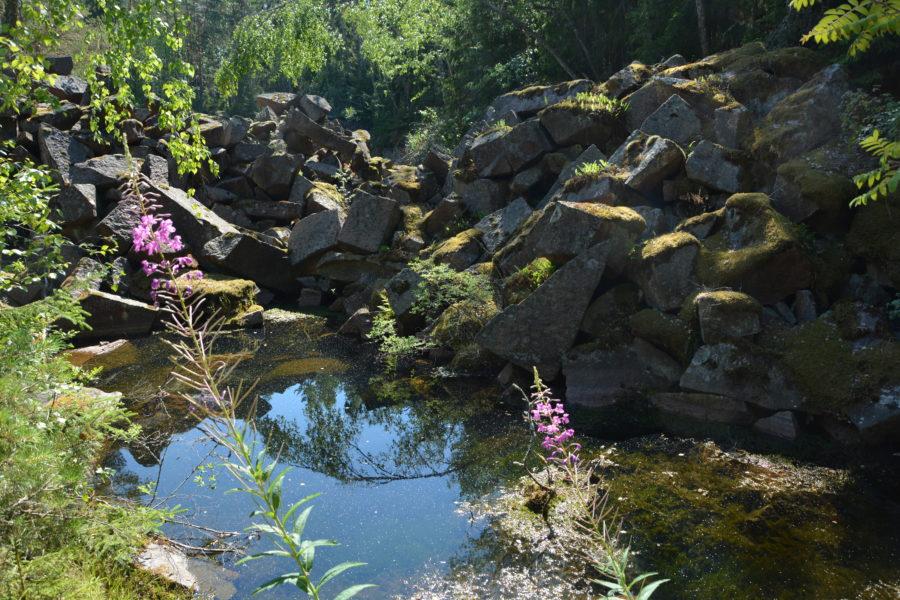 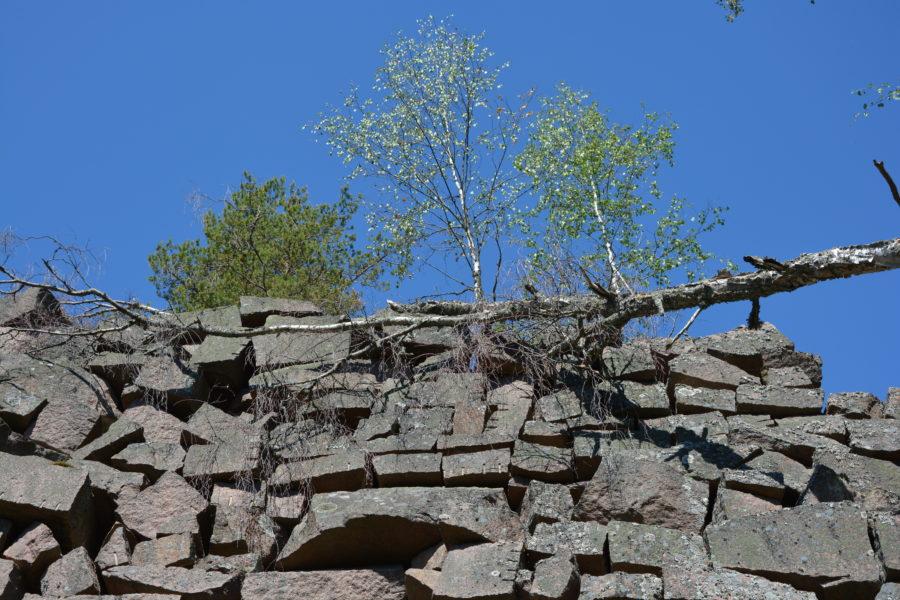 On the third day of the Summer Well, we made an excursion to Tummamäki’s nature trail in Vehmaa. The nature trail runs through an old granite quarry. The area consists of ca. 30-meters-deep granite pit quarries that are filled with ground and rain water. The ridges formed of ‘rääpekivi’ (= leftover rocks which were sold cheaper) rise up next to the pits and paths. The mining started at Tummamäki in 1932. Lehdon kiviliike stopped mining there in 1971, after which Kullgrens Enka Granit and AKF Granit continued the mining. The quarry was closed down completely in 1976. The visit to Tummamäki quarry inspired to think about non-human and non-living species: how the rocks were originated long before the human being was born, how human activity has re(con)figured the landscape and modes of being of life and nonlife in this place. 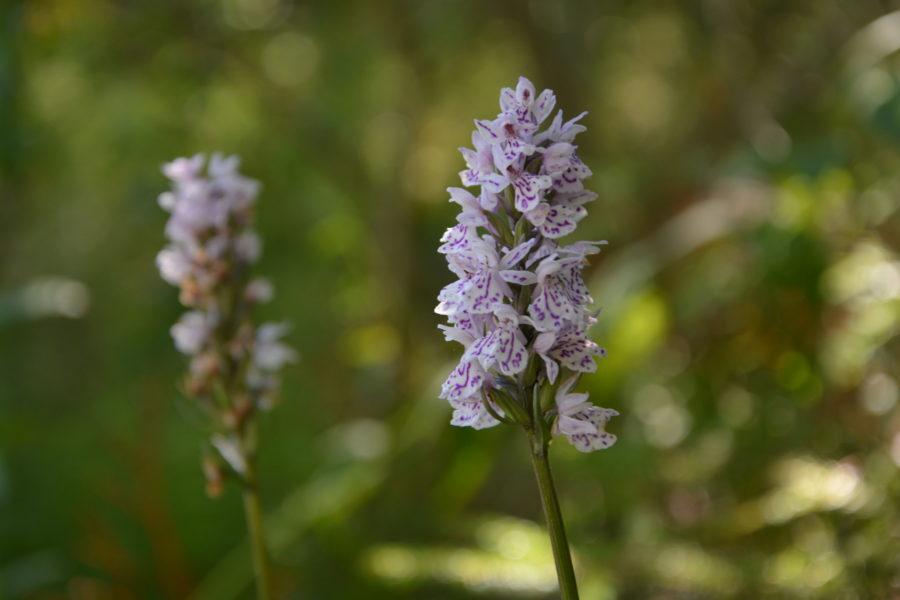 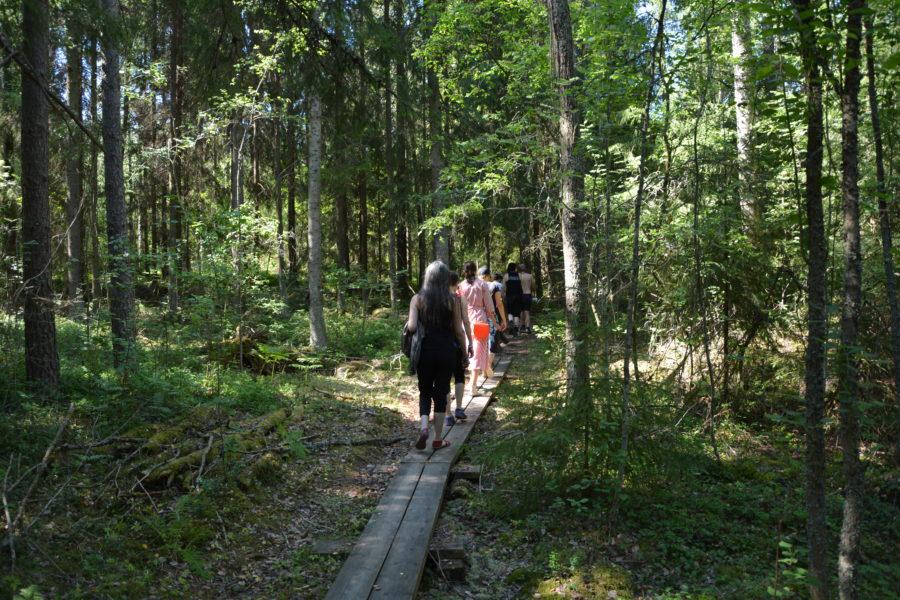 As a tail of our conversations, and as an invite into the maze of these ‘dispersed-situated’ ideas and knowledges (Magdalena Górska), and to invite future dispersion and situatedness, we would like to share a small reading/watching/listening list on the above topics and concerns, assembled collectively before, during and after the retreat at Saari Well, in order of spontaneous emergence:

Evelyn Fox Keller’s A feeling for the organism : the life and work of Barbara McClintock

Wolves in the Throne Room

Coil’s Musick to Play in the Dark

Mircea Eliade’s The Forge and the Crucible: The Origins and Structure of Alchemy

Jeffrey Jerome Cohen’s Stone: An Ecology of the Inhuman

Hugo Reinert’s ‘About a Stone—Some notes on geologic conviviality’

Donna Haraway’s Staying with the Trouble

Lastly, we would like to thank the staff of the Saari Residence and the chef Tapio Pääkkö for hospitality.