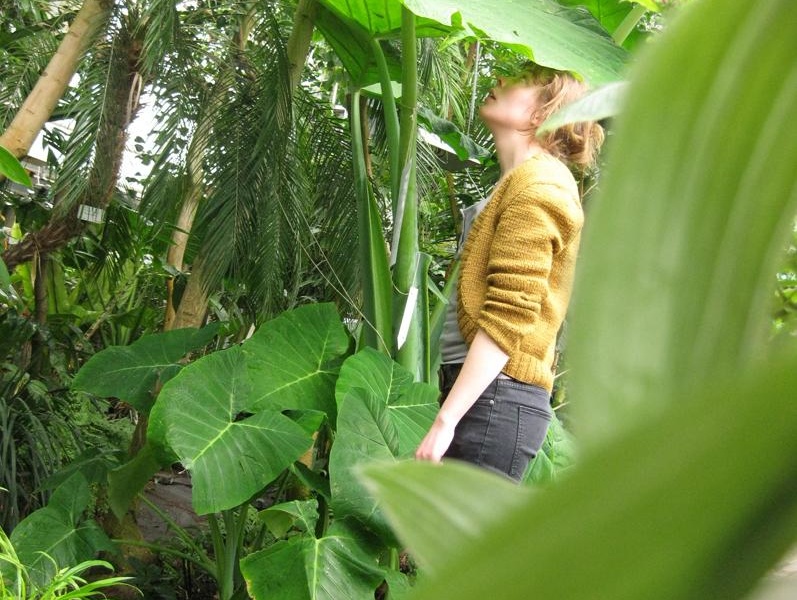 During her residence stay she completed an exhibition for Harkko Museum and Cultural Centre in Raisio, painted in the Residence’s beautiful artist’s studio, sketched outdoors, and enjoyed listening to the birds.

Katri Sipiläinen worked at the Saari Residence during February and March 2008. 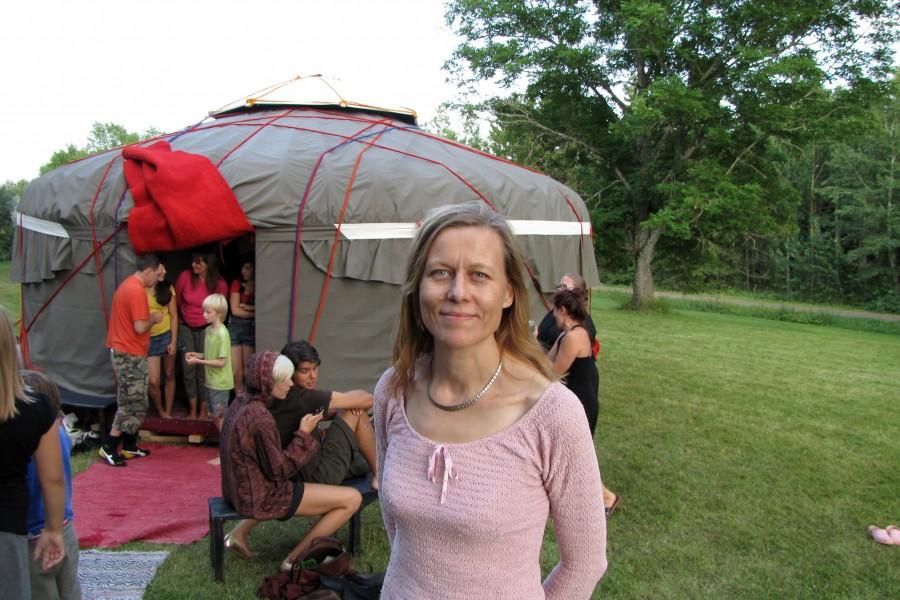 Work on a novel

Anja Erämaja (born 1963), originally from the Turku archipelago, lives in Helsinki. She studies in the Department of Photography at the University of Art and Design Helsinki and has done music in the Laulavat kahvinkeittäjät group. Her debut collection of prose poetry, Laulajan paperit (The Singer’s Papers), was published in 2005, and her second collection, Kuuluuko tämä teille (Does this Belong to You ) will be published in August 2009. Erämaja has also written and illustrated a children’s book entitled Hilu, Hippu ja äiti Valtava (The Iron, the Nugget and Mother Enormous, 2007). Lulu ja avaruuskoira (Lulu and the Space Dog), a children’s book she did with Ulla Virkamäki, was published in spring 2009.

‘In the blossoming early summer of 2008 at the Saari Residence I worked on my latest collection of prose poetry. I also wrote a number of little stories, one of which found its way the Lulu ja avaruuskoira children’s book. Occasionally my own children visited the Residence and then I had much else to keep me occupied, what with gazing at the cattle grazing, peering at birds, swimming in Mietoinen Bay, and retracing the footsteps of Marshall C.G.E. Mannerheim in Louhisaari’.

Anja Erämaja worked at the Saari Residence during April and May 2008.

Translator
Translation of a French-language drama

“I’m Reita Lounatvuori, a translator. For this first decade or so of my career I’ve been translating French- and English-language plays to Finnish. My range is fairly flexible: I have translated classics of dramatic literature, and modern dramas across the spectrum from tragedy to farce. Perhaps the best-known authors whose work I’ve translated are Molière, Jean-Paul Sartre, and Tennessee Williams.

In the tranquillity of the Saari Residence, in a room that was once occupied by a colonel I put the finishing touches to my translation of David Eldridge’s stage adaptation of Thomas Vinterberg’s film The Celebration (Festen). The main translation piece I worked on at Saari Residence was Emmanuel Bourdieu’s and Frédéric Bélier-Garcia’s philosophical sports comedy Le Mental de l’équipe. My workdays often culminated in the bird tower or on the nearby rocks down by the seashore. Such was the serenity at the Residence that I even wrote a poem there!

Reita Lounatvuori worked at the Saari Residence during April and May 2008. 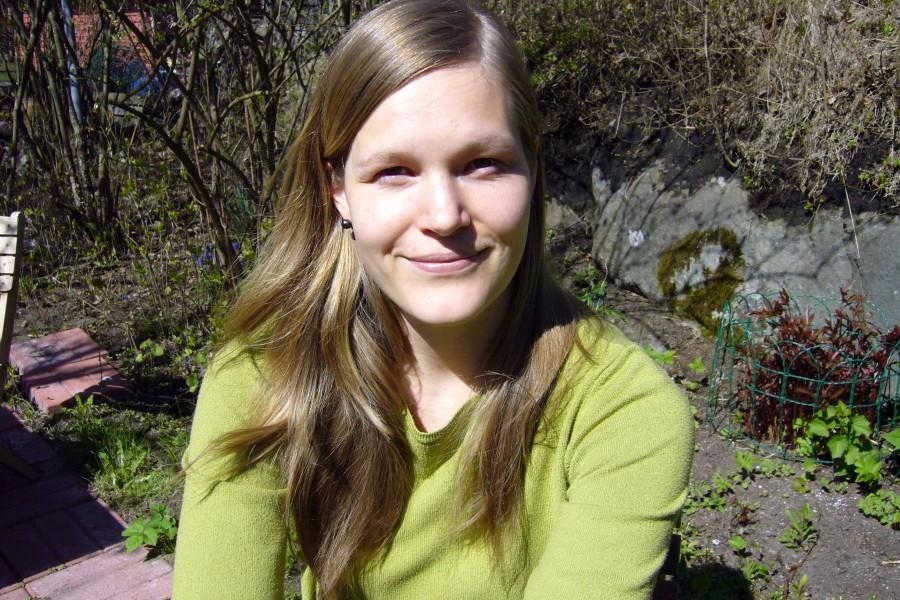 Juuli Niemi (born 1981) is an author and scriptwriter from Helsinki. She has published two collections of poetry: Tara (Otava 2003) and Enduring Joy (Otava 2005). She has also published a collection of short stories entitled Tule hyvä (Come, My Dear, Otava 2007), and wrote the screenplay for the film Kesäpaikka (A Summer Place). The film was a joint production by the national broadcasting corporation YLE and the Finnish Film Foundation.

‘I spent two wonderful months at the Saari Residence in May and June of 2008. A city girl’s longtime dream of being able to write in the rural calm finally came true, and in many ways even surpassed my expectations. Besides long walks and hours spent gazing at cattle in the nearby fields, I also got plenty of work done. You’ll be able to read the results in my next collection of poetry, due for publication in 2010’.

Juuli Niemi worked at the Saari Residence in April and May 2008. 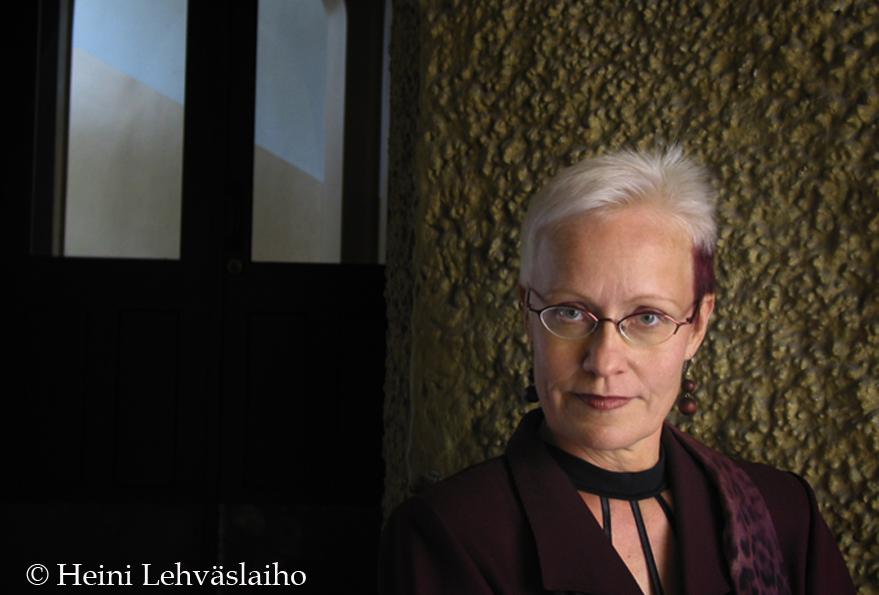 Author
Completion of a novel

Johanna Sinisalo is a novelist and scriptwriter from Tampere.

Her debut novel Ennen päivänlaskua ei voi (Can’t before Sunset) won the Finlandia award, Finland’s most prestigious literature prize, in 2000. The book has since been translated into several languages.

Sinisalo has published three further novels and a collection of narratives.

During her residence stay she completed work on the novel Linnunaivot (Bird Brains), which was published in autumn 2008.

The perfect serenity of the Saari Residence environment and the spectacular spring migration of birds that coincided with Sinisalo’s stay in spring 2008 seem to have brought splendid results: many critics have praised Linnunaivoja as some of her best work to date.

Johanna Sinisalo worked at the Saari Residence in April and May 2008. 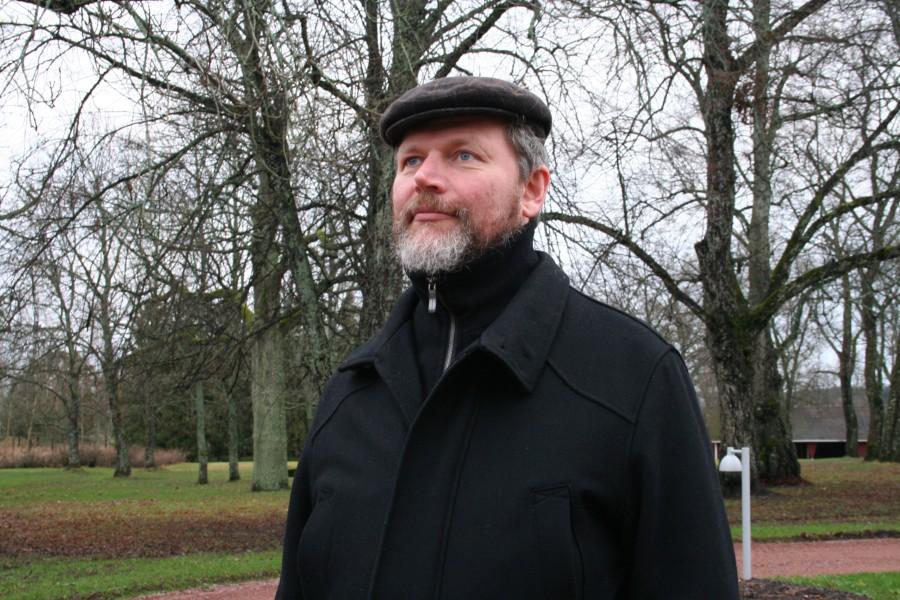 Sergej Zavjalov (born 1958, Tsarskoe Selo, Ingermanlandia), Russian writer of Mordovian origin; graduated from St.Petersburg State University in 1985 with MA in classical philology; in 1980s member of non-conformist literary union Club-81; the author of three collections of poems, the latest of which was translated into Finnish and Swedish.

November-December 2008, the Saari Residence, Sergej Zavjalov was working on a series of articles European and National Trends in Russian Contemporary Poetry and took part in Sapgirovskie chtenia -conference in Moscow, where he made a paper connected with this project.

Two articles that were completed in Saari have already been published: Vjacheslav Ivanov, the translator of Greek Lyric (NLO 2009/95), analyses the work of a Russian poet who had been educated in Germany and became one of the few literary men with European ambitions in the early-20th-century Russia.

Sergej Zavjalov worked at the Saari Residence in April and May 2008. 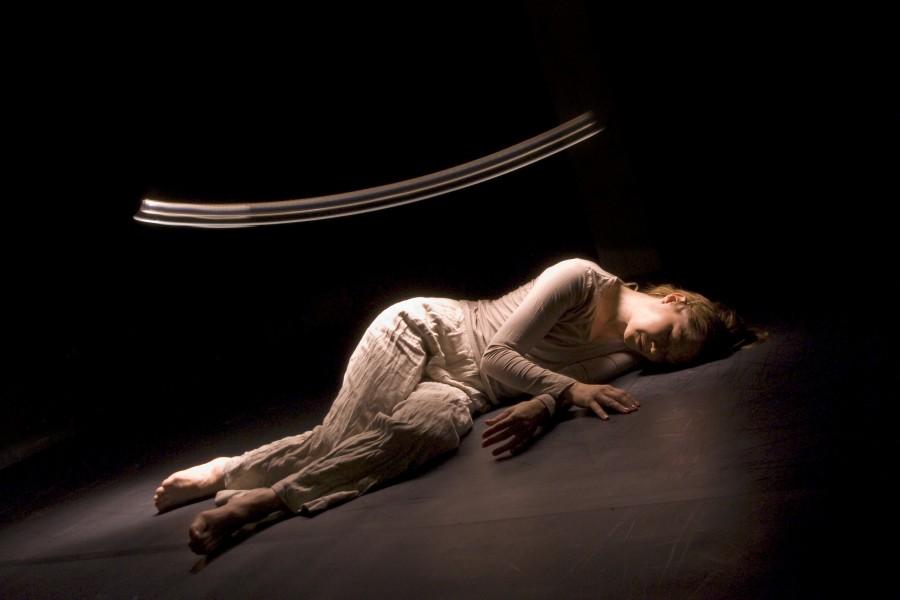 Practice residency for a dance production

Dance artist Satu Tuittila and choreographers Maija Hoisko, Kai Lehikoinen and Arja Raatikainen produced three solos during the summer of 2008. During their Saari Residence stay, the group immersed themselves in working out the choreography and the repertoire of moves for the performances. The starting points for all the solos were the words ageing, joy, parting, and a middle-aged female dancer whom the choreographers approached from a personal perspective.

Triangel workgroup worked at the Saari Residence in the summer of 2008. 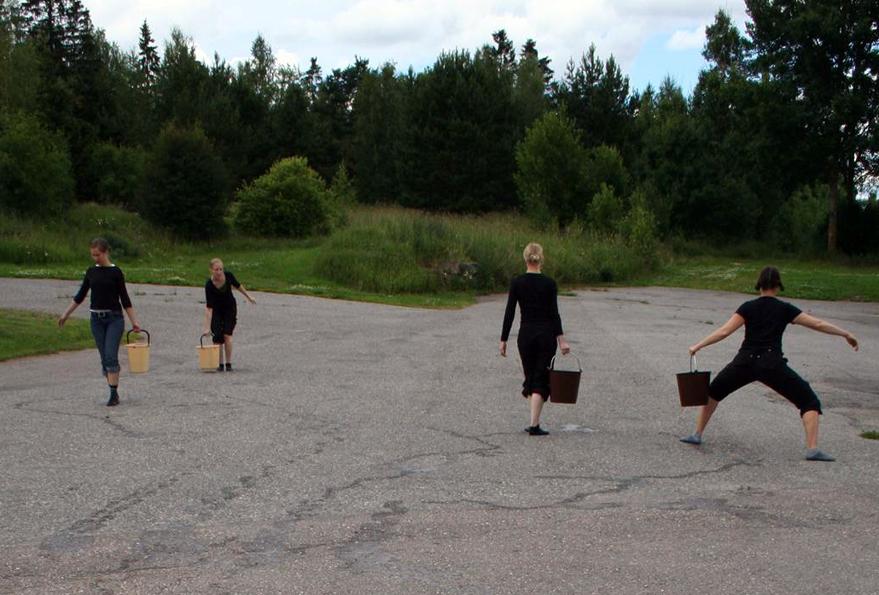 Preparation of place-specific and subject-specific presentations

Reviiri workgroup produces presentations which are by nature subject-specific. The group’s working methods belong to the field of Devising theatre and research. The presentations themselves and the process of creating them are given equal importance by the workgroup. Work roles are divided evenly amongst all the group members: each has the opportunity to conceptualize, scriptwrite, direct and present in accordance with the specific requirements of the work at hand and with their own interests.

The group is comprised of five theatre and performance at professionals, of whom four participated in the workshop held at the Saari Residence: Raisa Ekoluoma, Riitta Koukku, Petra Päivärinne, and Sini-Maria Tuomivaara.

The workgroup arranged events and happenings along with motion, photo and video installations in various places throughout the manor and its grounds.

The group’s stay concluded with a public performance of the material developed during their time at the Saari Residence. The presentation was called Työmaa-alueita. Kuvittelu sallittu (Construction Zones: Imagining allowed).

Reviiri workgroup worked at the Saari Residence in summer 2008. 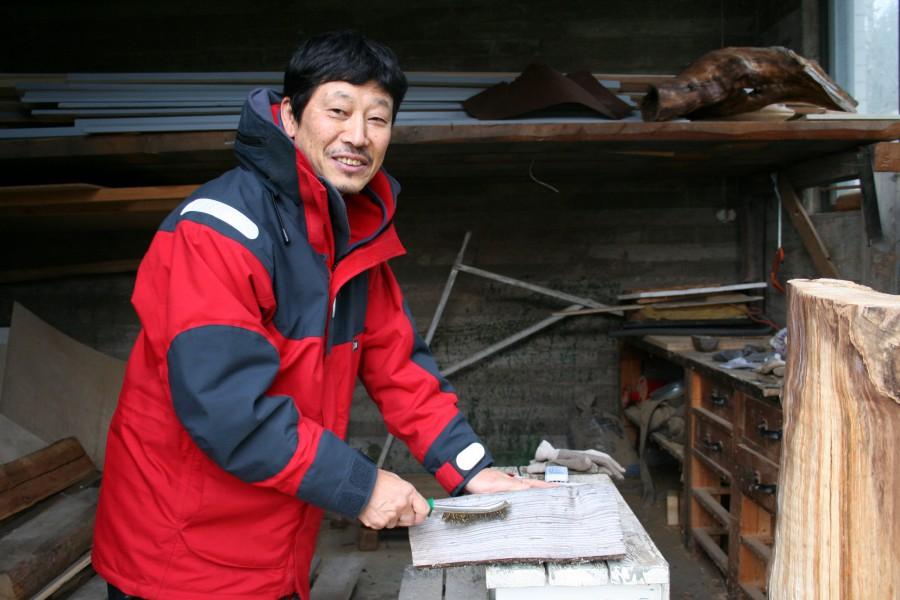 Mineo Kuroda (born 1948 ) is a Japanese sculptor. His purpose for sculpturing is to search for What is the reason for human beings’ existence? and What is I?

He makes four types of works (titled What is I?, Homage, Where will human life go to? and Existence) and open air sculpture.

“I chose 14 stones for making my stone sculpture (titled Wa – To relate) but we could not move 3 big stones because the soil was too soft, therefore I made a installation work (titledExistence – 99 fire woods) in Saari Residence in 2008.”

“I will continue to make Wa – To relate this year and I want to finish this work in November.”

Mineo Kuroda worked at the Saari Residence in fall 2008. 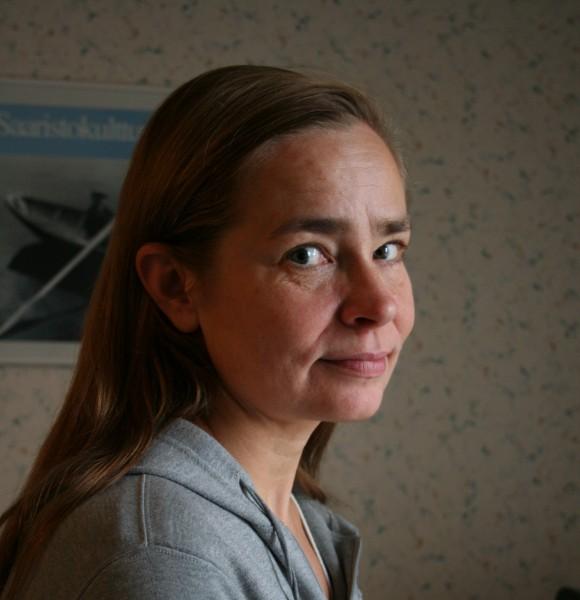 Author
Writing of a novel

Hanna Marjut Marttila (born 1961) is a freelance writer from Helsinki. She has published novels for adolescents and adults.

Her most recent novel, 2007’s Filmi poikki (Cut!, published in Finnish by Otava) portrays a teenage boy’s life in an alcoholic family. Hungarian, German and French translations will be published in 2009.

During her time at the Saari Residence Hanna concentrated on writing her next novel, which is still awaiting completion.

‘It was only after my residence stay had finished that I realized back home in Helsinki that one of the main characters of the book had ‘found a home’ in the rural surroundings of the Saari Residence. The character’s house is purely imaginary, but there it is, practically next door!’

Hanna Marjut Marttila worked at the Saari Residence in September and October 2008. 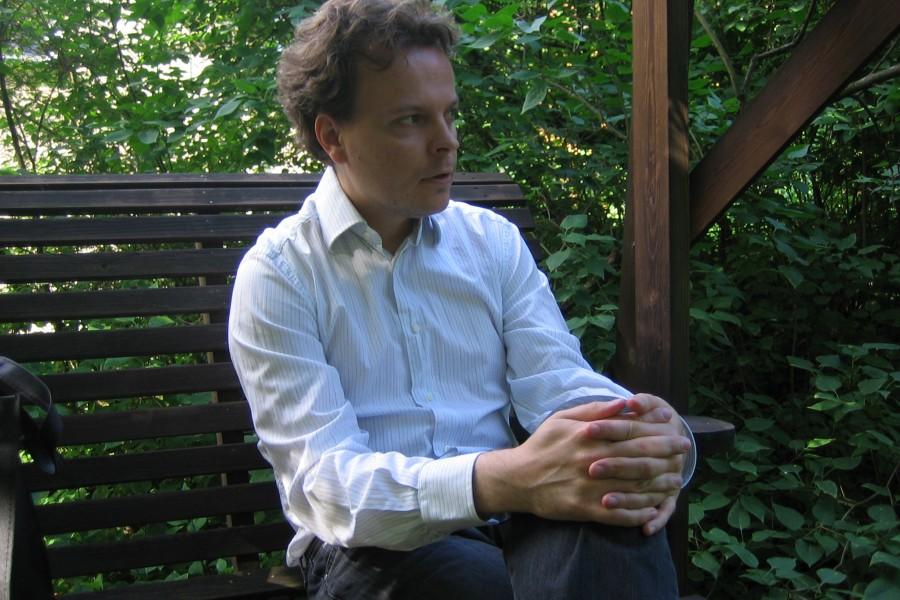 Kääntäjä
Completion of a Finnish translation of Homer’s “Iliad”

Tommi Nuopponen (born 1974), originally from Seinäjoki, studied at the University of Helsinki. He translates prose and poetry.

’In the good-natured and peaceful stronghold of the Saari Residence not only did I do translations of Homer and Ferdinand de Saussure, but I also dreamed of sculptures’.

Tommi Nuopponen worked at the Saari Residence in September and October 2008. 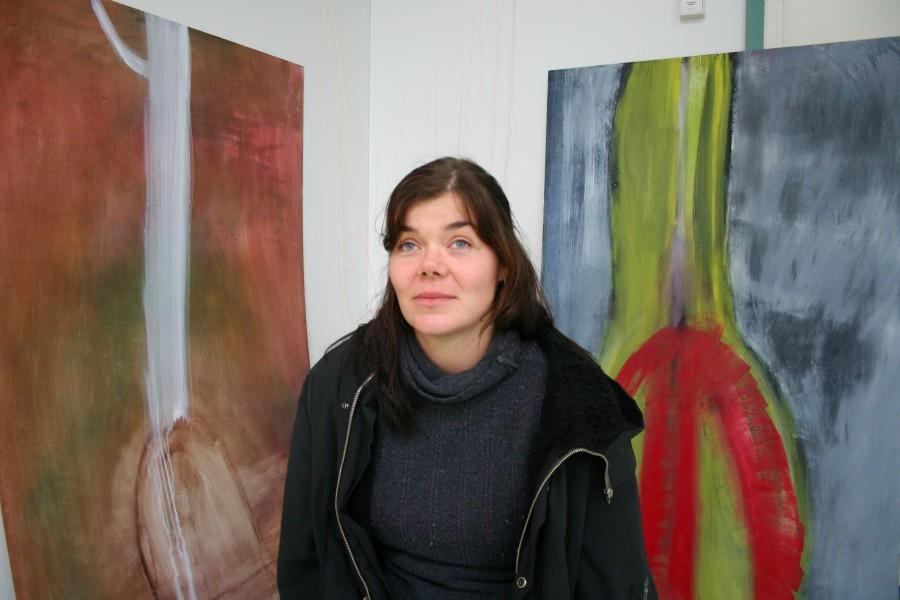 Artist
Preparation of a solo exhibition

Petra stayed at the Saari Residence in early 2008, shortly after it first opened.

‘While at the Residence I painted, went for walks, picked mushrooms and got to know nice people: it was the ideal place for all those things. The work I did at the Saari Residence formed the basis for an exhibition to be held at Helsinki’s Galleria Sinne in October and November 2009.’

‘The 2008 works displayed on my website were done at the Saari Residence’.

Petra Mutka worked at the Saari Residence in September and October 2008. 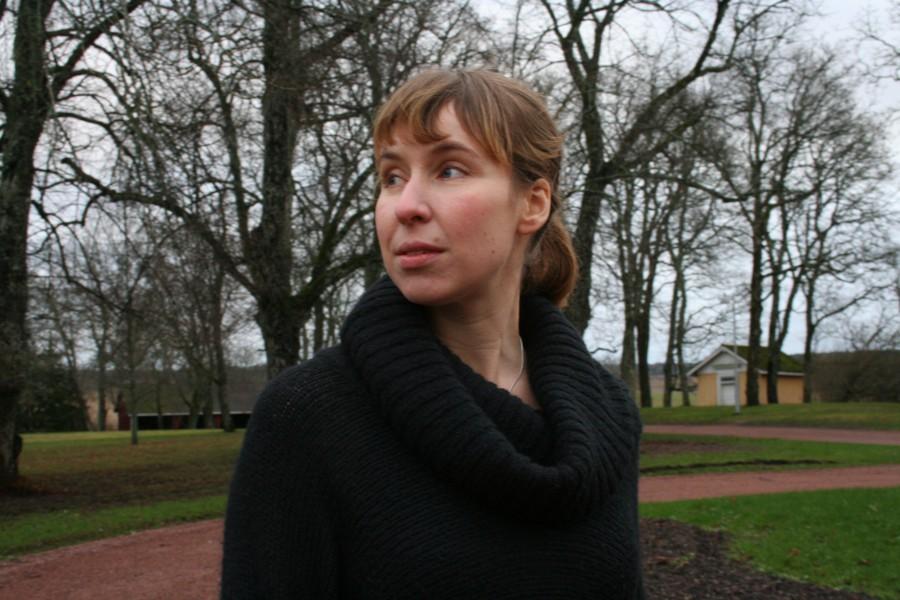 Heidi Masalin graduated as a choreographer from the Theatre Academy Helsinki in 2005. She has also studied in Manchester Metropolitan University and worked as a dancer, dance teacher and choreographer in Finland and England.

She also produced a script for the work, in which motion, dance and verbal interpretation go hand in hand. Thanks to the stay at the Saari Residence, her overall working method had an ideal chance to grow and develop.

‘Never before have I had the luxury of being able to prepare so thoroughly in such a peaceful environment, although tranquility is an indispensable requirement of this and indeed any other kind of creative process’.

Heidi Masalin worked at the Saari Residence during November and December 2008. 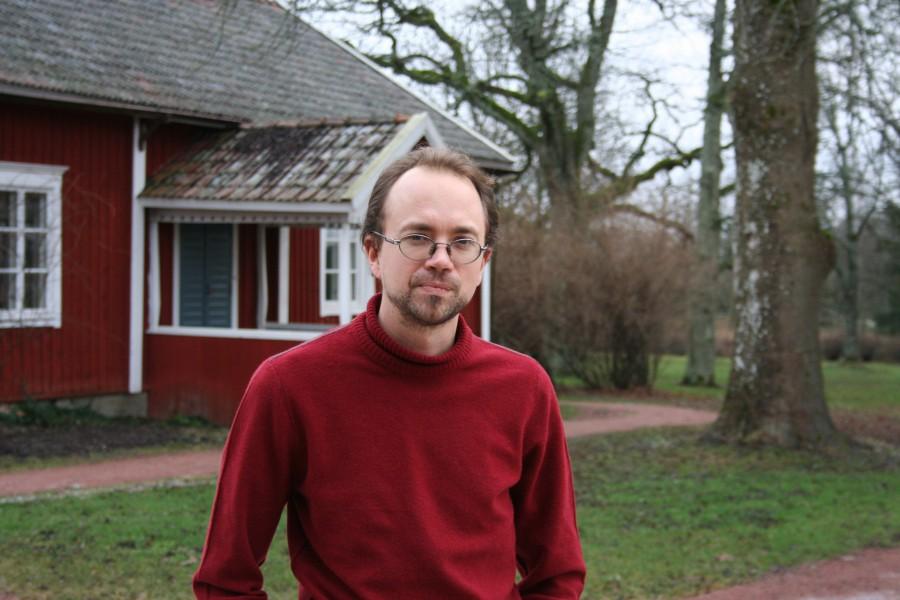 Aki Salmela is a poet and translator from Helsinki. He has published four collections of poetry, the most of which is Yhtä ja Samaa (One and the Same) published in August 2009. Amongst the works he has translated into Finnish are selected poems by John Ashbery and Ron Padgett.

‘During my stay I worked on my fourth collection of poems and on a number of translations, including some short stories by Donald Barthelme. During the wintertime peace of the Saari Residence I also read quite a stack of books, which until then were mounting up in a corner just waiting for the right time to come along’.

Aki Salmela worked at the Saari Residence during November and December 2008.