At the beginning of the year, the “Digital Youth in the Media City” research project published an online popular scientific book. The purpose of the collection of multisensory and thought-provoking essays is to make scientific research understandable, memorable, and human in a new way. This blog post considers why these kind of popular research publications are needed nowadays, and what we have learned along the way.
Photo: Patrik Rastenberger

The Digital Youth in the Media City: Belonging and Control on the Move online publication is a collection of essays on the researchers’ fieldwork. They discuss various themes of their research projects: fieldwork in the metro environment, encounters in an urban circus, active player communities of Pokémon Go, the redefinition of the city by sticker artists and debating gender in graffiti subculture.

The Digital Youth in the Media City online publication is not a traditional collection of research findings in strict academic format. In addition to publishing peer-reviewed articles in journals, we decided that for this project we would produce a multisensory and experimental publication that combines both science and art. The publication is aimed not only at the academic research community, but also a wider community, such as journalists, decision makers, students, youth workers and everyone who is interested in urbanism and youth culture.“According to statistics, scientific, peer-reviewed publications are often only read by a handful of people around the world. The publication formats are strict, and varying paywalls or other agreements that restrict access to the articles are ever more common in the scientific world. As researchers, we cannot just sit back and watch these developments. We wanted to produce a publication that was free to read and could easily be found online. Above all, we wanted the project to communicate in a manner where the reader is not simply a “head” that absorbs information, but rather a thinking, feeling, entire human being that experiences the world with all their senses”, sums up project director Johanna Sumiala, from the University of Helsinki.

In the opinions of the project researchers, writing a popular science publication was a good experience. Writing about the research can be done in a slightly more relaxed and thoughtful style and more illustrative examples from everyday life can be used than in scientific text.

“I wanted to find a balance between clarity, beauty, and being informative. I thought that the text could be more expressive and appeal to the reader’s senses and imagination”, explains Nadezhda Vasileva, a researcher on the project.

“When writing in a popular scientific format I got into a “free flow” mode of narration, which is not usual for me when I write traditional academic text”, reflects researcher, Yana Krupets, of St. Petersburg’s Higher School of Economics. “I believe it is very important for academics to go out of their frame of habitual writing. Writing in a more popular style offers the opportunity for a check with “what’s going on in the real world. Writing popular science also increases the visibility and the voice of the informants in society”, Krupets adds.

On the other hand, in Yana’s opinion, it was challenging to present the conceptual ideas without sociological categories or theories. ”Sometimes I felt the lack of words that help me express my ideas to the full extent. It created uncertainty and the anxiety of giving too vague or oversimplified interpretations.”

Researcher Arseniy Svynarenko notes how it is a relief that when writing in popular scientific texts there is no expectation to constantly consider how one’s research is linked to previous research in the field, rather the researcher can employ their own voice more freely. Nevertheless, Svynarenko adds, finding the balance between academic and everyday language is a challenge. Furthermore, the researcher position is something one has to consider. When writing a popular scientific text, the researcher has to balance a more neutral style with a more informed and educated style.

Many say that art and research have different objectives. Research attempts to explain the world and create new information, whereas art is freer to challenge people to think differently and be provocative.

For example, the audio production, The Underground Wind, by Taina Riikonen, puts the listener in the position of travelling through metro tunnels filled with machine sounds and subterranean breezes. Information experienced via sound creates a strong sensory imprint, as well as a path through the data contained in the essays. At the same time, the sensory imprint aids the retention of the information.

It was also great that photographer, Patrik Rastenberger, joined the project. With the help of the project researchers, Patrik was able to contact sticker artists in St. Petersburg as well as graffiti artists and Pokémon Go players in Helsinki. He was able to follow the subjects with his camera as they moved around Helsinki and St. Petersburg using the urban spaces in various ways.

When approaching from new perspectives, combining art and research faces challenges in terms of research ethics. Especially when the research subjects are young people whose lives were made visible via words and images.

For researcher Heta Mulari, a particularly complex question that became apparent was that of anonymity and how it relates to young people’s right to have attention drawn to their artistic expressions.

“Guaranteeing anonymity was one of the ethical cornerstones of the research project, however, artistically active young people may well experience it as exclusionary. We need to find a balance between research ethics and the right of young people to be seen as the creators of their own art.”

As the competition for data intensifies, the importance of popular science increases

It is important to combine different ways of communicating research. By combining science, art, and popular scientific writing it is possible to reach a broader group of people. Strict scientific language often excludes various participant groups.

In a world where every citizen, researcher, and decision maker constantly has more information at hand, popular scientific writing becomes a way to stand out from the flood of data.

“No-one likes too much information, but at the same time we repeatedly hear how information is in an impractical form, full of jargon, inaccessible and unusable. There is a considerable need for multi-sensory information, but do we know how to use it in society? I suspect not sufficiently, at least not yet”, says Leena Suurpää, one of the project co-directors.

Suurpää emphasises that in today’s world of competing data the question of expertise and its justification is not only politicised but has also become more complicated. Information is a weapon of politics and power. We expect information to be up to date, comprehensive, thorough, predictable, reliable and sensitive.

“The dialogue between research and art has potential power in the competition for information, also in terms of ethical sustainability. We need more processes for the production and publishing of multisensory information!”, Suurpää encourages current and future researchers and artists. 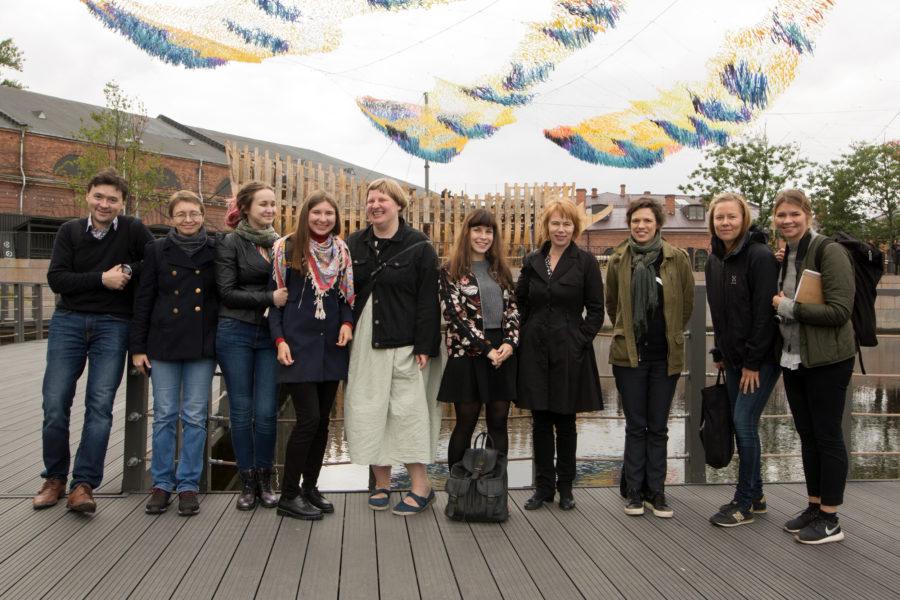 “Digital Youth in the Media City” is an interdisciplinary research project funded by the Kone Foundation from 2016 to 2019. The “Digital Youth in the Media City” online publication is published by the Finnish Youth Research Society; it is visually and technically produced by Kaskas Media. The online publication was written by the research project’s researchers and edited by Johanna Sumiala and Annaliina Niitamo.