Reflecting a poem on the pond

The work of art came about at the Saari Well, as poet Henriikka Tavi’s poem was reflected on the surface of the pond.

Jaakko Niemelä and Henriikka Tavi got to know each other when they were residents at the Saari Residence at the same time in November–December 2009. “I heard about visual poetry for the first time when Henriikka described her work to the other residency guests, and it stuck in my mind,” says Niemelä.

The actual cooperation, which is in the spirit of the Saari Well, started in autumn 2013 when Niemelä started creating a work of art that is reflected on the surface of the pond. Niemelä remembered Tavi’s poems and discussions on the visual aspect of poetry, so he contacted her and she was keen on the idea.

The Saari Residence is close to the hearts of both Niemelä and Tavi, so creating a work of art together has been an enjoyable process. Tavi worked intensively at the Saari Residence a few times over the winter. “We have had many discussions on the visual look of the text, so we now have a clear idea of how it will look in the work of art.”

The cooperation provided both artists with new perspectives, and this was the first time that Niemelä worked with poetry. “I work with light. In my works I study how different materials reflect light and how artistic lighting can be combined with functional needs. I have worked with text before, i.e. numbers, characters and letters, but this is something completely new.” 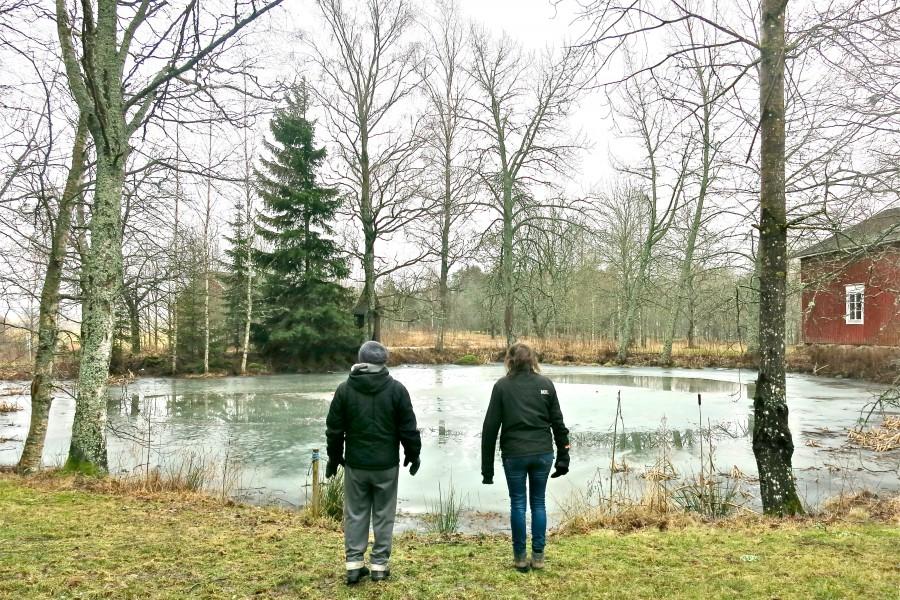 The work of art also provided Tavi with new perspectives and challenges. “The technical specifications are something new for me and this is the first time that I have been involved with light art. It is easier to write long poems than it is to write a poem with a maximum of ten words,” she explains. She has previously worked with IC-98 and her cooperation with Mikael Brygger and IC-98 resulted in the In large, well-organized termite colonies text strips.

Art is free when we are free