Moving in November is a contemporary dance festival organized yearly in Helsinki since 1986. The festival has been a significant source of inspiration for the Finnish dance scene throughout the years. In the beginning of this year, Kerstin Schroth started her three-year term as the artistic director of the festival. She will be introducing new directions and looks into ways, how the festival could spill over the city, and its set festival time. In this text she opens up the thinking behind the festival.
Sonja Jokiniemi's ÖH premieres during Moving in November 2020. ⁠The piece is this year's co-production between Zodiak and Moving in November. Drawing: Sonja Jokiniemi

Moving in November takes usually place during a limited period of time in November each year. In combination with this short and intense explosion of festivity, we now seek for ways of spilling over the set time frame. This changes the role the festival has in the Helsinki area, enables new ways of collaboration with other art organisations in the city and allows to support and follow artists in a continues way.

I enjoy the thought, that the festival appears from time to time in different forms throughout each year (as a residency place, a space for mentoring, as a host of conferences, a space for collaboration with various partner organizations and artists, both local and from abroad). As much, as I would like to see the festival spilling over time, I would like to see it spreading even further over the city. We have started the conversation with potential new venues and organise performances in two new places already this year.

Listening and Observing as Tools for Thinking of a Festival

When I started to think about the festival while being present in Helsinki and getting to know everybody, the question of the local in relation to the international started to become more and more important for me. Moving in November has been a festival that brought first and foremost international artists to Helsinki and engaged each year in one local co-production together with the production house Zodiak. I am interested in questioning how a festival that has so far invited mainly contemporary art from abroad, can engage with the local artist scene in a stronger way. I would like to give space to the local art scene in an equal way as to the artists coming from abroad.

Another question that I have been busy with is the question of time and temporality. I like to play around with the notion of time. Giving time has been always an important factor in my working and private life. For this year’s edition I also looked for pieces that play with another temporality. Pieces that take place in other spaces than the classical black box and that propose another relation to the audience. The idea is to make space for pieces, that often fall out of the usual logics of festival programs, in terms of time, space and audience capacity.

The third working question circles around the social aspect of the festival and appeared while taking part in the festival in 2019. I was present to get to know the team, meet artists, collaborators, people from partner organizations, as well as the audience of the festival. I wanted to observe and engage in conversations. A strong part of my practice as an artistic director is in being present, giving time, listening, and observing. 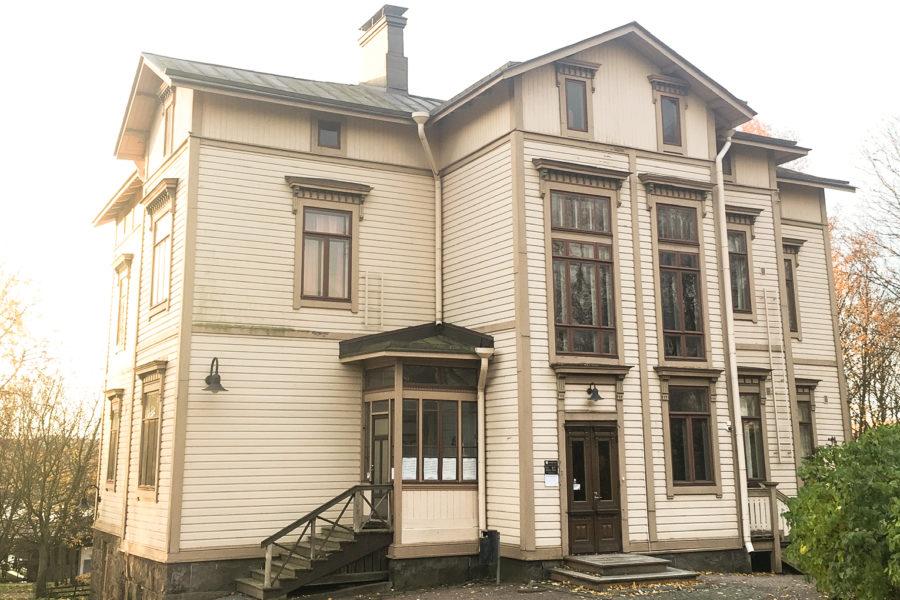 Moving in November festival office is located in Villa Eläintarha in Helsinki where also HIAP – Helsinki International Artist Programme, one of the collaborators of the festival, runs an artist recidency. Photo: Isabel Gonzalez

My attention during last year’s festival was strongly drawn towards the social aspect. I wondered why people so often left so quickly after the performances. Having gotten used to French habits, I was not used to that anymore. I took this observation as a starting point and got hooked to the area in-between the theater space and the outside world. How could the festival invite people to stay and how could we create a space where people would feel invited to have discussions and encounters also with the invited artists. For this year’s festival I invited choreographer Pietari Kärki to join the festival team to engage in a dialog with me on the question of the social. We are working especially on the idea of an invitation for the audience to inhabit the space between the theater and the outside world.

Its maybe important to mention, that continuity has always been an integral aspect of my thinking. Especially regarding Moving in November, a festival I always cherished for it’s independent approach and close and very commited releations to artists. Of course there will be changes because I’m another person and I bring another energy with me. But apart from this, we will continue to operate in this spirit and there will be a continuity regarding some of the artists that have been presented during the past years.

Schroth is a curator and arts manager and lives in Berlin and Paris. From 2006 to 2019 she worked as the company manager of Great Investment, the company of the Danish choreographer Mette Ingvartsen. Schroth lectures at the university of Gießen, K3 Hamburg, Sommerakademie Berlin and Uniarts Stockholm. In 2006 she founded the annual festival sommer.bar under the festival Tanz im August (Berlin) and curated it for six years. She has worked as a production manager for international festivals, such as Tanztheater International (Hannover), Tanz im August (Berlin), Poker im Osten and Context#3 – Learning by doing at Hebbel am Ufer (Berlin).

Moving in November is a contemporary dance festival organised yearly in the Helsinki area. The festival is an invitation to come together and experience performing arts from abroad alongside works from the local artist scene. In 2020, the festival takes place between November 5–15. The whole program is announced later. Read more: www.movinginnovember.fi

Re-ecologizing theatre
At the Well blog