A woman is sitting among sheep, a black blindfold covering her eyes, gradually taming one of the sheep to get it to wear a similar blindfold on its eyes. The relationship between human and animal features strongly, and a male voice chants in the background.

By the Saari Well

The scene is from Kristiina Koskentola’s video Gold Coins to the Headsmen, which she created in September and October in 2014 during her residence period at the Saari Residence. The song on the video is by poet, performance artist and essayist Jonimatti Joutsijärvi, the Saari Residence’s invited artist. 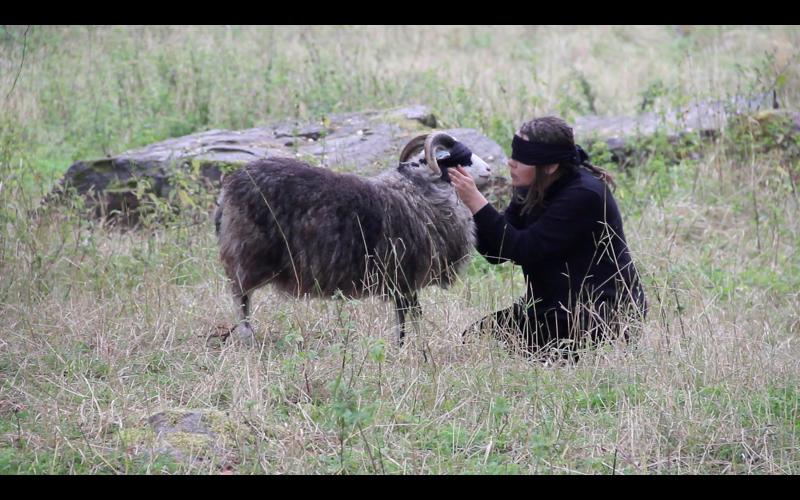 Photo from Kristiina Koskentola’s video Gold Coins To The Headsmen.

Relationship between animals and people

Kristiina Koskentola used her residence period to work on her dissertation which deals with her artistic work. During the period she also became familiar with the young rams that grazed near her flat.

“I started to think about the human-centric nature of the relationship between people and animals, and what it means to “become friends” with slaughter lambs, and about the meat industry as a whole and the associated politics and began to film a video,” she says.

The title of the piece is Gold Coins to Headsmen, which refers to an old custom in which those condemned to death were advised to bribe their executioner in order to ensure a death that was as swift and painless as possible.

Sheep also played a role in Koskentola’s installation in Iceland in summer 2014.

Koskentola found it inspiring to film the piece and it became a daily morning ritual that was enjoyed by everyone involved, Koskentola and the sheep alike. “After a shoot we always went to eat some rowanberries and leaves: I’d grab the higher branches and pull them down so that the boys could reach them because the lower ones were already bare,” Koskentola says.

The filming took several weeks. First Koskentola got Vilu, one of the rams, used to wearing a blindfold, which alone took a couple of weeks. This was done completely on the animal’s terms. “For the actual filming I went to the pasture every morning as the sun rose, put the camera in place and waited to see what would happen. The biggest surprise was when I started to film the scene where the ram is being blindfolded, and another of the boys (Panda), with whom I had not practised blindfolding, offered to play along and then I included this in the final video.” 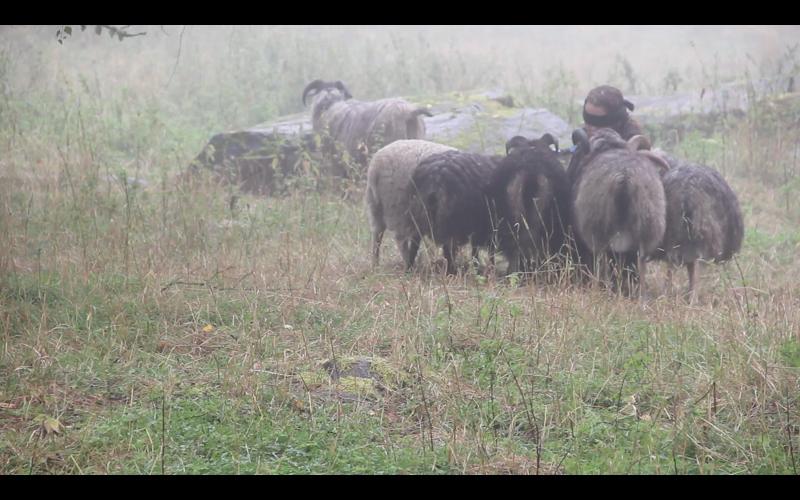 Photo from Kristiina Koskentola’s video Gold Coins To The Headsmen.

The video’s soundscape was produced by the poet Jonimatti Joutsijärvi. “When I saw the material where Kristiina spends time with the sheep that are blindfolded, I recognised something that was relevant to me, too. The encounter between an animal and a human and, on the other hand, co-existence with the animality in humans have inspired many questions and insights in me recently,” he says.

Joutsijärvi says their collaboration was flexible and interesting: “Kristiina provided me with video, which I commented on briefly and then I sang melodies on tape that I felt corresponded with the idea and atmosphere of the video. Kristiina would then comment on my tapes and then I would record more, based on her comments. I want to create songs now anyway, so it was very useful to try singing in public but in my own room like this. The song in the video has no lyrics so it is, in a sense, entirely free of the problems of a poet and songwriter.

“Like Jonimatti said, our collaboration was smooth, and his singing offered me new dimensions as I had never before collaborated through music. It was interesting to see how another artist approached the subject,” Koskentola says.

Read more about Gold Coins to the Headsmen from here