The second invited artist at the Saari Residence, poet, essayist and performance artist Jonimatti Joutsijärvi talks about what his invited artist residency has meant for him.
Joutsijärvi says he has succeeded in achieving his goals at Saari. Photo: Pirre Naukkarinen

Poet, essayist and performance artist Jonimatti Joutsijärvi (b. 1984, Salla) is the second invited artist at the Saari Residence. He has been working at the Saari Residence since September, for a period of nearly eight months. At the beginning of his residency, he said he would focus on writing poems and songs. His goals also included completing a novel he started writing as a child.

He says he has succeeded in achieving these goals at Saari.

“I’ve written many new songs and finalised my work of poetry. In addition, the manuscript of my novel is in good shape,” he says.

Writing a novel has turned out to be a more complex and ambitious project than Joutsijärvi may have expected. As a poet, he typically of completes poems in one go, but working on a novel has been a different type of project and, above all, a learning experience.

He had a clear idea of the storyline, but the content and narrative techniques required work.

“Now I have added some baroque-style content around the storyline,” he says.

The manuscript is not as complete as he intended it to be at the beginning of his residency, but the big picture has become clearer.

“Now I know where I am with my novel. I’ve been writing this novel since 1996, so it is taking more than just a few months to finalise it,” Joutsijärvi says with a laugh. He is expecting to complete the novel before the end of this decade.

Songs have been an important part of his residency.

“I have written many songs and tunes, but many of them are not yet finalised,” Joutsijärvi says. His body of work includes around 100 songs, some of which still need work.

His residency period has offered him an opportunity to focus on his work on an entirely new level of intensity, and his performances to the other artists in residence have been rewarding.

“I have become more confident about my way of expressing myself and using my voice. I no longer need to convince myself or keep wondering what my performance means to listeners,” he says.

Joutsijärvi feels that at the Saari Residence he has been able to break free from his past, meaning that the past no longer dictates or determines his existence and actions to the same extent.

“I have been able to digest some difficult life experiences,” he says.

In November 2014, one of his friends, singer-songwriter Marja Mattlar, performed at the Saari Residence. Joutsijärvi’s discussions with her have reinforced his views on the methods of working on poetry. Reliving your past is an integral part of the process of creating a new work, as it is the only way in which a work can genuinely touch readers or listeners. 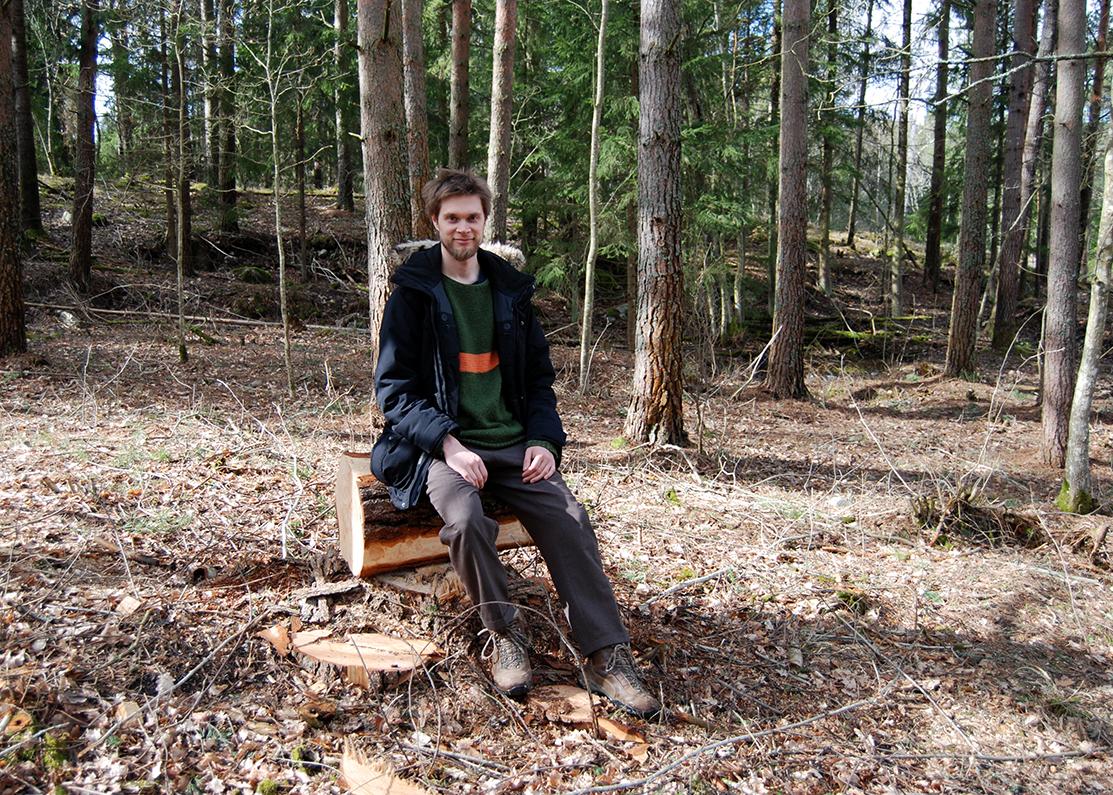 What has it been like to work at Saari Residence? What are Joutsijärvi’s thoughts on the groups that worked together for two months at a time? Four such groups were organised during his period at the Saari Residence.

“I’m happy about the processes I have gone through here, both on a personal and professional level. The circumstances have been favourable for artistic work and even for working on difficult topics and pieces,” he summarises.

“Each group was different, and I noticed that the social environment has a more powerful effect on me than I thought. Social situations have felt challenging at times, but the fascinating encounters in each group have outweighed them.”

Living with other artists has also offered new dimensions; for example, through cooperation with Kristiina Koskentola on her video work Gold Coins to the Headsmen. Working on the audio track gave Joutsijärvi a new type of confidence in his singing.
According to Joutsijärvi, however, cooperation with the other artists in residence has been a minor aspect of his residency, as it has been important for everyone to focus on their work. Nevertheless, encounters with other artists have inspired something new – he feels that seeds have been planted that may blossom in the future.

These include encounters with performance artists Samantha Jayne Williams and Philippa Hambly and the recital of The Kalevala as part of their Unmasked project, as well as a performance with the Spanish artists Ana Matey and Isabel Leon. In addition, Joutsijärvi was very impressed with playwright Kevin Doyle’s work ethic, which boosted his own work.

Many unconscious impulses emerge by coincidence at Saari Well and find their way into the works of several artists. For example, Ana Matey found a dead and mummified swallow, which was included in House of Sorrow by the Saari Residence’s community artist Pia Bartsch, and in a project by scenographer Tua Hautamäki, an artist currently in residence.
“Wandering impulses are fascinating. They belong to no one, and it is impossible to determine whether they are art, but they wander from one work to another and are part of something to be created,” Joutsijärvi says. 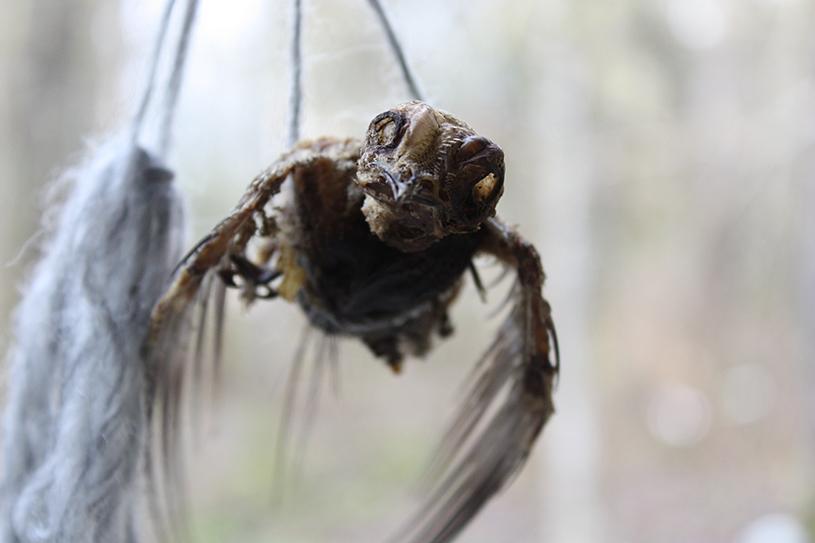 The significance of nature for Joutsijärvi has increased over the past eight months.

“I have become well acquainted with the Laajoki and Mynäjoki rivers. My relationship with the natural environment here has been open and straightforward: I walk to a site, spend time there and come back. Sitting on stones, listening to the sounds of nature, such as cranes in recent days, has been important for my work here,” Joutsijärvi explains.

He compares working at the Saari Residence to a beautiful natural phenomenon.

“Great mulleins, my favourite flowers, are growing near the footman wing of the house where I live here. The great mullein is a biennial plant: in its first year, it produces a rosette of leaves and does not bloom until the following summer. After that time, the seeds from its flowers can remain germinative for centuries. This is a good description of the rhythm of artistic work. Something is being created, even though it is not immediately visible,” he says.

Joutsijärvi will have fond memories of the Saari Residence; he mentions “gratitude” several times. He is also going to miss his apartment, where he was able to practise singing without disturbing anyone or being disturbed.

He has lived near Turku for a long time, in different places far from the city centre, and he feels now is the time for him to return to the city, to more lively urban surroundings.

The only thing he knows about the future at this point is that he is going to write a long essay about power.

Joutsijärvi focused intensively on his work at the Saari Residence. He recently finalised a work of poetry that was being printed at the time of this interview.

Ohjattua kerhotoimintaa niille joiden sydämessä läikkyy (Guided Club Activities for Hearts That Run Over) is his third volume of poetry. It is “a continuation of texts and chains of prose and poems that discretely enquire about – seriously and playfully, outdoors and indoors – the depth of the reader’s presence. The work studies dreams, the senses and emotions, such as fear and love, as well as encounters with people and animals.”

Different Routes: A Russian philosopher who was shot in Siberia found a sympathiser in a Finnish student of Russian language and literature
Long reads

Different Routes: The queer gaze sees love and compassion in the Quran