Kalle Hamm’s and Dzamil Kamanger’s Immigrant Garden collection of pieces (the book, art works and plants with signs in the manor grounds) was originated while the artists were resident artists at the Saari Residence in spring 2016.

We produced our first conceptual garden, The Immigrant Garden, for the Sato/Harvest exhibition in Fiskars in summer 2007. Since then, we have also produced other similar gardens for exhibitions in Finland and abroad. The Immigrant Garden is a kind of summary of the reflections over the years about plants as a metaphor for otherness and about how people should face plants and various othernesses alike.

As it welcomes international artists and researchers, the Saari Residence is a constant stage of arrivals and departures, with invasive species taking their place and role. 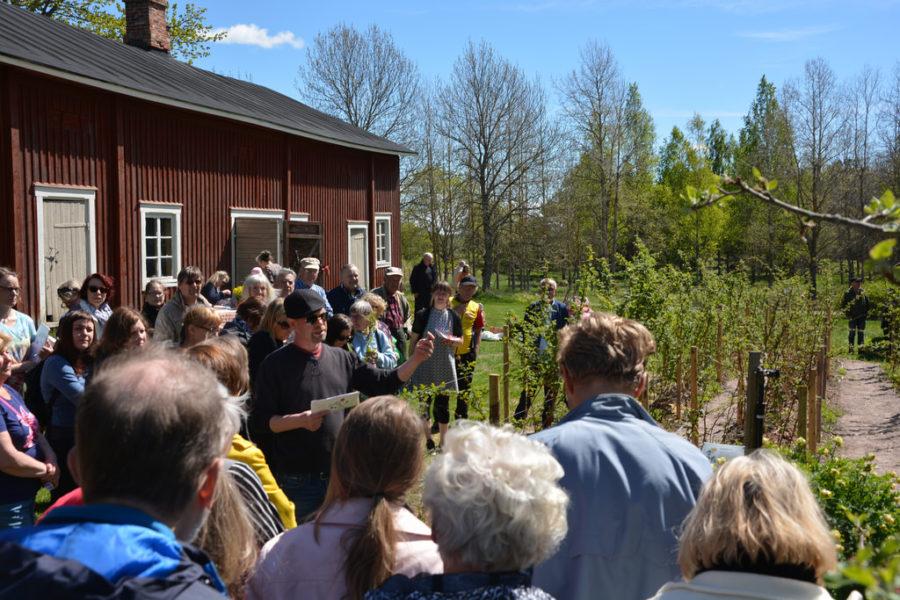 Kalle Hamm and Dzamil Kamanger presenting their work on the open house day 2017.

The selection of the 32 plants in the herbarium was based on their origin; none of the species are native to Finland. They are all either ancient or recent introductions, and many of them have been growing here for hundreds, if not thousands of years. Another requirement was that the plant was growing on the grounds of the Saari Residence at the time the herbarium was made.

Not all invasive species that grow on the grounds were included in the herbarium. For example, species that originate in Southern Europe and that grow in Finland as invasive species were excluded. Selection was also made on the basis of historic sources, curiosities and the location of the plants in the mansion grounds. However, the initial setup of putting together a collection of plants was problematic: a human decides the stories that are told.

Kalle Hamm has drawn the pictures on English parchment made of calfskin using Iranian handmade drawing pens made with plant extracts.”