How can bilingualism survive for thousands of years?

This spring the Boldness blog has included contributions by different scholars on the aspects of multilingualism in the contemporary world. There are cases, however, in which we can trace the history of multilingualism during several millennia. To take an example, the history of Sicily is full of true stories of languages in coexistence.
Mount Etna. All photos by the author.

One long-term relationship between languages in Sicily began when the Romans conquered and annexed the largest island of the Mediterranean in the 3rd century BCE. The dominant language on the island at the time was Greek, and both Greek and Latin were spoken on the island during the ensuing one and a half millennia. (But towards the end of this period, we do not say that people spoke Latin, but Romance.) Throughout the same period, other languages were spoken on the island, but their status varied. How is it possible that the area was bilingual or multilingual for such a long time? Or is this something to wonder about?

A stonecutter from Palermo orders a bilingual advertisement in Greek and Latin for his workshop, possibly during the Augustan period. Whoever writes the text is not very familiar with the norms of the two languages, which is why the text shows the influence of Punic, maybe the author’s first language.

Claudius Theseus commemorates his deceased family members in Messina in the first century CE. The epitaphs of his wife Cartilia Irene and the 14-year old son Claudianus are in Latin, but the infants Romanilla and Romanos are remembered in Greek.

In the year 434, Felix Eumathios, governor of Sicily, issues an edict in which he praises the renovation of Achilles’ baths in Catania, and emphasizes how much wood consumption has been diminished after the work. The edict is incised in Greek with large letters into the façade of the baths.

The left side of Eumathios’ declaration.

When Sicily was part of the Roman realm, the relationship between languages reflected the ambiguous position of Greek as the second important ”national” language. Although the relatively light central administration was using Latin everywhere, in the Roman regions of the Eastern Mediterranean the language of writing was mostly Greek. It was obviously not the only language spoken in this huge area, but the written sources give a distorted image of the totality of languages spoken by people. In Sicily, the other languages were not used in writing in Roman imperial times, and the information concerning them is scarce. Punic had been spoken in Sicily already when the Greeks arrived in the 8th century, and it survived until the imperial period. In addition, Sicel or Sicul and Oscan, relatives of Latin, had been used there, as well as Elymian, which is less well known. These languages appear to have perished by the beginning of our era.

The position of Greek and Latin in Sicily was influenced by the notable demographic changes in Roman history, such as the massive slave trade, which has been called one of the darkest chapters in human history (Walter Scheidel). It brought tens or hundreds of thousands of people into Sicily from the 3rd century BCE onwards. It is assumed that they mostly came from the Eastern Mediterranean, for which the simplifying term “Greek East” is used. Their language of communication may have been Greek. Sicily was a well connected island, which humans have always been able to reach by sea from the Italian mainland or from North Africa.

Another important demographic change was the colonization of Sicilian towns by thousands of war veterans devised by the emperor Augustus. The effect was an increase in the number of Latin speakers. In all, the position of Greek in Sicily was not as dominant as it was in the Eastern Roman Empire, where Latin always remained a small minority language which withered away in a few centuries. 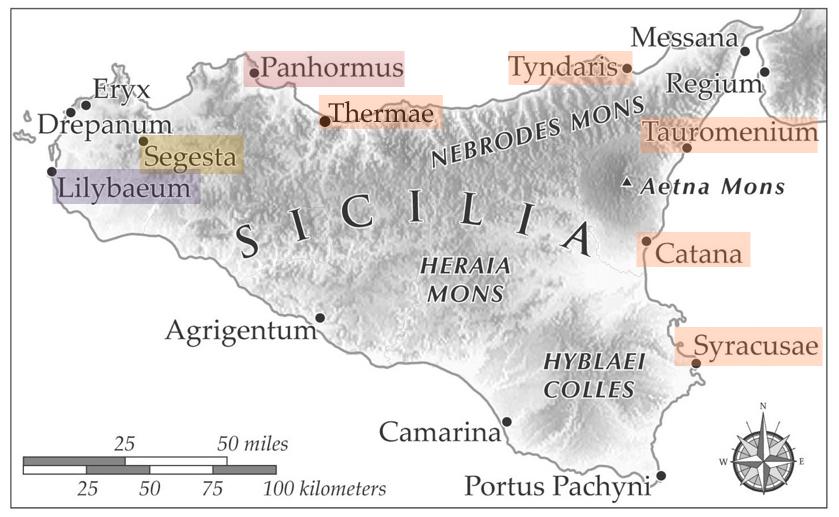 To summarize, two languages were used in written sources in Sicily under the Roman empire, and further languages were used in speech. On the societal level, the island was multilingual. But can we know anything for sure about individual bi- or multilingualism? Can we consider even anecdotes as factual information, such as the comment of the Greek-writing Sicilian historian Diodorus, who claimed to have learned Latin through interaction with the Romans? Yes we can; if this is not certain, it is at least probable. We can also consider probable that both Latin and Greek were used in the family of Claudius Theseus, although possibly in different contexts. His children’s names indicate that the Roman identity was appreciated in the family.

There are other conclusions one can draw. For example, I interpret the structural similarities in Greek and Latin epitaphs from Catania and Messina as an indication that the people who wrote them were bilingual or at least in interaction with each other: the language communities were not separate. Another argument against the separation is the fact that social position did not correlate with the principal language in the household: members of the cultural elite could be Greek- or Latin-speaking, as well as those who were affluent, and also the slaves. Both languages were spoken within the same extended families. 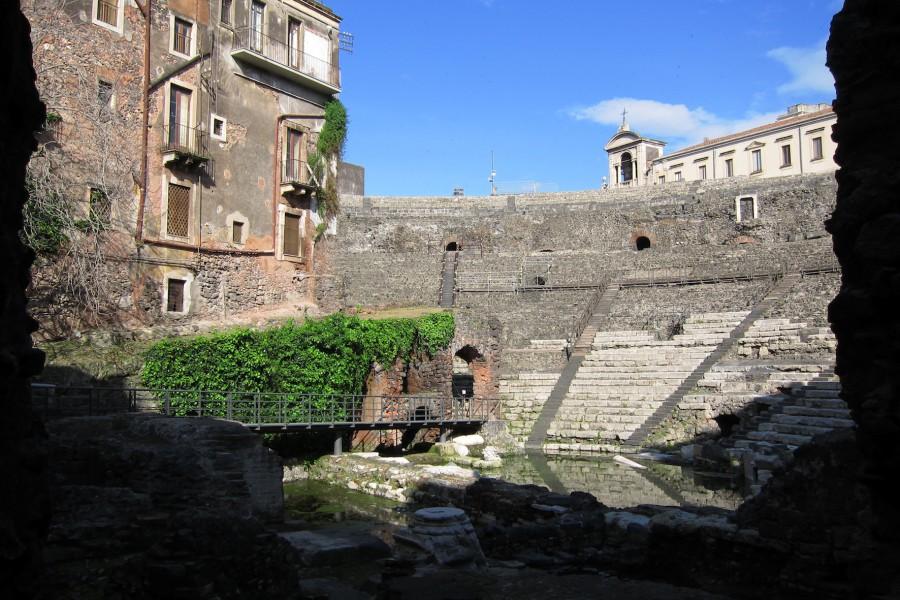 The theatre in Catania of Roman imperial date.

In my own research I have criticized the scholarly tradition of dividing Sicily into the Latin West and the Greek East. The evidence speaks against such a division, if the areas are thought to be monolingual. Both languages are attested in the sources in every notable coastal town. Some scholars have suggested that the Greek used in Late Antique sources, such as Eumathios’ edict on the baths, was due to a desire to cultivate a linguistic identity that had already disappeared from everyday life. The evidence does not support such a hypothesis.

A smith makes a reliquary in South-Eastern Sicily in the 7th or 8th century, with the images of Saint Mary, Jesus, and apostles in relief. The names of the saints are incised in Latin, but with a combination of Greek and Latin alphabets.

In the year 1111, countess Adilasia (Adelaide) and count Roger, her young son, sell eight farm workers with their plots of land to knight Ḥalīq. The document, drafted in Messina, is written in Arabic, and a Greek summary is attached.

Mary and Anna, the widow and daughter of John Raptissa, sell their apartment situated in the centre of Messina to Leon Arkoleon in 1201. A Greek notary produces the document; of the witnesses, two sign in Latin, the other seven in Greek.

One could think that nothing changed during the Middle Ages, when Greek and Latin were still used across Sicily. Still, a new written language, Arabic, had emerged. But what about the Migrations of Late Antiquity, the Byzantine rule, the Arab conquest during the 9th and 10th centuries, and then the conquest by the Christian Normans in the late 11th century? The conquests and wars caused suffering and destruction, but not 20th-century style genocides. New rulers needed subjects. New inhabitants entered Sicily especially during the Islamic period from North Africa, and in the Norman period from Central and Northern Italy. The culture of writing was, in the new monotheistic religions, closely connected to religious erudition.

Still, the Greek language started to disappear rapidly after the 12th century. It seems that the area where it was spoken was limited to the North-Eastern corner of Sicily, the region around Messina, which was in constant contact with the predominantly Greek-speaking Calabria. The last speakers of Greek evidently died in the region of Messina in the 16th century. Arabic had become extinct in Sicily much earlier. However, both languages left many traces in the Romance dialects and names in Sicily. The island became, for some centuries, relatively monolingual, but rich in dialectal diversity. There were only small linguistic minorities, such as Catalan and Albanian. Only now the situation is changing again.

Is it even interesting to speculate which languages people spoke, instead of focusing on which languages were used in the sources and how? In my view, such a speculation is worthwhile, because there are similar issues involved between why languages were maintained in the past and how present languages can flourish. Similar processes took place, although most people did not have a strong consciousness of language policies, and they did not have the means to ponder why languages survive. Still, they were interested in the situation, the future and even the survival of their own languages.

Olga Tribulato (ed.), Language and Linguistic Contact in Ancient Sicily (2012), which includes my article “Language and Society in Roman Sicily”

Other articles on my academia.edu page.