Hodhayfa Salih challenges you to put yourself in their place

"Recently I began to paint on the themes of war and how people die senselessly. In order to understand how I came to paint on these themes, I need to go back and take my life as an example."

I was 4 years old in Baghdad, Iraq in 1980 when the war with Iran began. That war continued for 8 years and I feel that I lost my childhood. After the war ended, we hoped to begin living like other people in the world. Unfortunately, as it turned out, within 2 years another war began and our people were victims of political games. That war was with the United States of America and there were 33 countries who opposed Iraq, or specifically, Saddam Hussein. This was because he occupied Kuwait. After this we experienced very difficult times and lived very poor lives. I remember how my brother and I stood in very long queues just to get enough bread for one day. The state gave us coupons for this. We had no electricity. Our country was closed on all sides. Nobody could leave it and nobody could enter it either. There were neither exports nor imports. Therefore, we began to make everything by hand. I even remember as a child candy bars from dates. These were our sweets, as they grow in Iraq and you can’t get anything cheaper. This kind of a life continued until 2003 when the next war began.

This war was the initiative of the United States. They were against Saddam Hussein. In reality, he was created by the United States, but later refused to co-operate with them. We soon got used to bombings every day and to hearing who had been killed that day.

As an artist, I decided to portray this part of our lives. The first such painting, which I painted was called  There were children here. I used real sand and showed a game of marbles, which I painted. The leaves falling from the trees represent death. In Islamic tradition, we are told that in another world there is a gigantic tree and when someone dies, a leaf falls off that tree. The red spots are drops of blood. The lines represent the shape of the game. This painting is a memorial to the children who played that game. All that is left of them are the marbles that they played with.

I took part in the first exhibition after the war in the Academy of Fine Arts at Baghdad University with this painting. The exhibition was called Small dreams in great worlds. I remember that several artists who took part in this exhibition and were my friends, were later killed because of explosions. 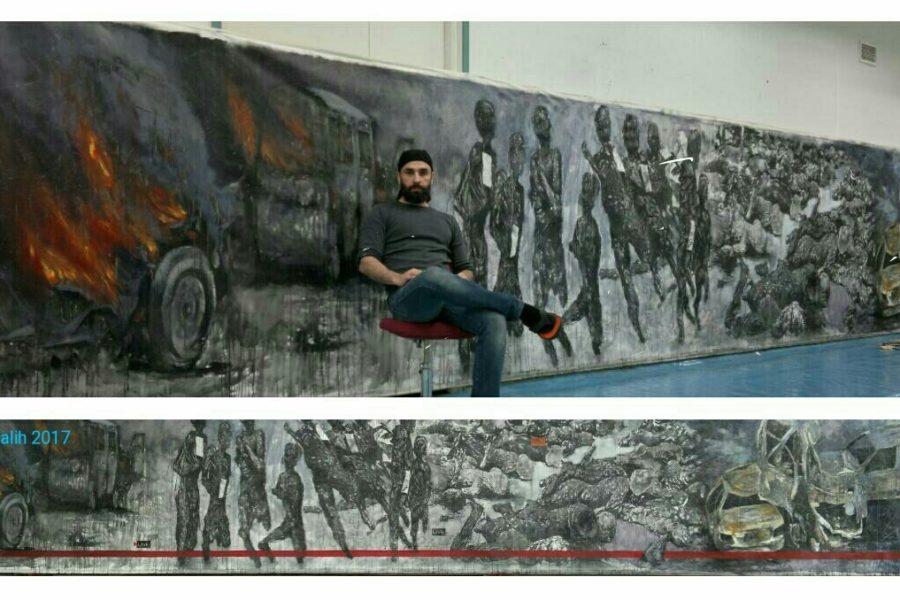 Gradually things became worse and we saw things and experienced things that we earlier could not even have imagined. People started to hate each other and problems began between Sunnis and Shiites and they began to kill each other for no reason. I lost the person dearest to me, my older brother, just because of his name. They killed him because of his name. I was also in a lot of threatening situations. This was the reason that I fled Iraq. I fled on my birthday in 2006. I left for Ukraine to continue my art studies and to Ukraine because it was the only place that I could get a student visa to.

There I continued my life and I thought that it would be a safe place to live. I married and had a family and everything was wonderful until the war began between Russia and Ukraine. From my viewpoint, everything was beginning just as it had in Iraq. This was in Mariupol where I was living. I even saw how young men fought because one of them was Russian and the other, Ukrainian.

One day my sister rang me and told me that my brother had been killed. It was then that I thought I would paint about this situation – about how people kill each other for no reason and I had my first personal exhibition, which I called Betting. The idea behind this is that when bets are placed on two animals that are forced to fight, nobody cares about their fate, but only about their winnings. I used as examples, fighting dogs, cocks and bulls. Just as it happens with people. Like the animals that fight, the fights between humans are controlled by forces that will gain from this.

At the opening of this exhibition, I was amazed that people didn’t understand me correctly. I told them what had happened between Sunnis and Shiites in Iraq and they thought that I was talking about Ukrainians and Russians.

After this I began to work on my next exhibition. This was made up of graphics and drawings. In these, I showed different views of bombings and deaths in Iraq. These were scenes that I had seen with my own eyes. The main drawing in the exhibition was called, We are all Christians. This was because ISIS (Daesh) wanted to make a new rule, that Christians could either pay them to stay or they could leave if they did not want to be killed. They began to place a sign on all Christian houses. The sign was the first letter (Nun) of the Arabic word, “Nasara’’, which means Christian. This was to show where Christians lived. The Iraqi people were completely against this and demonstrated and held up that sign “Nun” and beside it they wrote, ’’We are all Christians’’ – they also chanted this.

My next exhibition I called To Whom It Concerns’. The main work was a great canvas 8 x 1.5 metres. I called it, Why?’ I questioned human rights. I drew bulls and Spanish bull fights. It is a terrible sport and they try to stop it because even animals have rights. Therefore, I asked how it is possible that animals have rights and yet my people have none.

After this I went to Finland and continued, through my work and more exhibitions, to tell people what is happening in my country. I have had a very good reaction in Finland and my work has been very well received and I have been helped to have exhibitions in different places. I want to send this message to the whole world and I hope that I will be able to show my work around the world.

I consider myself to be lucky because I got the chance from the Kone Foundation to continue my work on this theme and am able to begin sending my message around the world. I want to thank the Kone Foundation for everything that they have given me. I am now working on a big painting, 10 X 1.5 metres, which is called, PUT YOURSELF IN THEIR PLACE.

An anonymous evaluator: Evaluation of residency applications takes time and requires a self-critical approach
At the Well blog

Thinking about sustainability and modes of presentation
At the Well blog