The third invited artist at the Saari Residence, comic artist Hanneriina Moisseinen talks about what her invited artist residency has meant for her.
Photo: Riku Pihlanto

“This is an artist’s paradise, offering space and time. The Saari Residence is an environment where the creation of art is a justified, accepted way of being,” Hanneriina Moisseinen says, smiling. “Here we do not need to justify our activities as we do in ‘normal’ life,” she adds.

Moisseinen is visibly tired but satisfied. Last night, she stayed up until two. Her last week as the invited artist at the Saari Residence has begun, and she plans to make the most of every minute.

Moisseinen has been working as Saari’s invited artist since the beginning of September, a total of eight months. She has completed her fourth comic book, for example. The book, called “The Isthmus”, will be published on Tuesday, 24 May at the opening of an exhibition in Galleria Huuto. “Tuntematon” (“Unknown”) is a joint exhibition with Visa Knuuttila.

In “The Isthmus”, Moisseinen wants to introduce new perspectives and the use of multiple narrative voices to war comics. The main characters of the book are a milkmaid, a deserter who has gone mad, and above all cows. “I thought that they would enable me to talk about war, wartime conditions and being forced to abandon one’s home,” she says. “The Isthmus”, whose name refers to the Karelian Isthmus, is a war story that gives a voice to those previously denied one.

“I believe the book will find its audience. Simply because I am a woman, publishing a war book whose main characters are a woman, a herd of cows and a mad deserter. This is a provocative way to begin,” she says.

“I’m eager to hear readers’ comments on the book and see what details they correct me on. Many people are very passionate about military history. I tried to research even the tiniest details to avoid criticism for inaccuracies,” says a smiling Moisseinen. 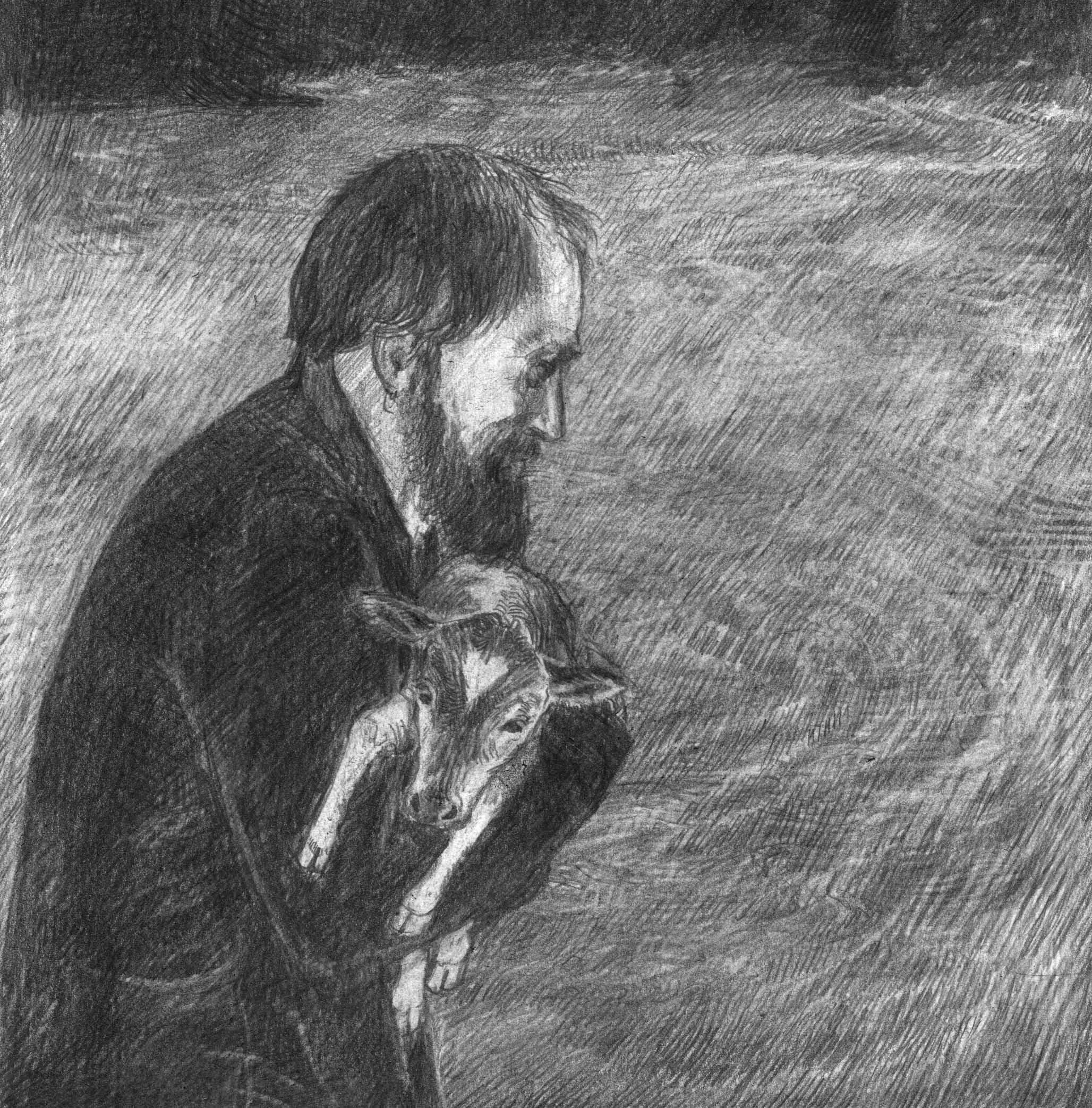 New takes on a Karelian identity

“The Isthmus” is also a study of the possibility of creating a new Karelian culture. Karelia is nostalgised and its culture is displayed in the form of dusty inkle bands in display cases. “What is modern Karelian culture, where is it and to what extent is it tied to geographic locations? Traditions can remain alive in the diaspora, too,” explains Moisseinen.

She has heard plenty of anecdotes about the evacuation of Finnish Karelia. Karelians always seem to be singing the same tune in their tales. She wanted to understand what it was all about. “The current generations cannot identify with war and evacuation experiences, because they have never experienced them. My comic is an attempt to create a dialogue between the younger generations and military history,” she says. “I hope this book is discovered by as many Karelian people, evacuees, war veterans and Finnish history enthusiasts as possible.”

Human handprint in the landscape

Over the winter, Moisseinen frequented weavers’ meetings in Mietoinen. Women there told her that the original residents of the area built their houses on forested hills. “When the Karelians arrived, the lands of the Saari manor were split up to provide farms for around 70 families. In Mietoinen, all houses built on fields belong to people from Karelia. Their arrival changed the landscape profoundly,” she adds.

“It is nice to think that my book describes the evacuees’ departure from Karelia, and they have arrived right here to start small farms,” Moisseinen says. The landscape really changed after 1944.

“People seem to have forgotten that, in the not too distant past, 408,000 immigrants arrived in Western Finland. The situation of the Karelian evacuees was different in the sense that they had nowhere else to go and no one expected them to return there. There are nonetheless plenty of similarities with our times, in the way in which people flee war and how refugees are welcomed,” she says.

“The Isthmus” has already been translated into English by poet Pauliina Haasjoki, who worked at the Saari Residence in the autumn. The original Finnish version is called “Kannas”. “The theme of the book is universal and topical, making it a natural choice for translation,” Moisseinen adds.

At the beginning of her invited artist residency, Moisseinen intended to make some noise on the pump organ, but she never had the time to play. The instrument was finally handed over to another artist at the Saari Residence, musician Marja Johansson, for the price of a composition. “I thought the energy of the pump organ would reach a wider audience if I traded it for a score composed for an animation,” she says.