Saari Fellow during January and February 2016, Helsinki-based artist Martta Tuomaala, says that art has always been present in her life. As a child, she was interested in creative professions, although, thanks to her passion for music, she initially dreamt of becoming a pianist.
Photo: Pirre Naukkarinen

For several years, Tuomaala has had jobs in typical low-wage fields such as cleaning, sales and customer service, and factory work. These work-life experiences have influenced the themes of her art work. She addresses social structures of power, and recurring themes in her works include portrayals of the working culture, the survival strategies of various individuals and communities, and the change in working life. Key elements in the artistic work of Tuomaala include research, long-term planning, and cooperation with individuals and communities. Some of her projects include communal and engaging characteristics.

”For me, the most natural way of organising my thoughts in an artistic process is through audio-visual narratives, which means that I like to use different forms of moving images,” she says. Tuomaala writes the scripts, directs, and often also produces her work herself. ”The team plays a key role in the development and production of a work,” she says. Usually, artists work with the same artistic team, which often consists of at least a cameraman, editor and sound designer, in addition to the artist. ”Members of the team cannot be replaced just like that. Good team dynamics, trust and a shared understanding of the agreed artistic decisions cannot be taken for granted,” she continues.

Themes for works of art do not just pop into Tuomaala’s head as finished ideas: she often finds ideas in issues that have been surrounding her for a while. Some ideas brew up in her mind for years, somewhere between the subconscious and conscious areas of her mind, until they finally take a form concrete enough to be processed visually and audibly.

In her opinion, her work method does not follow any particular pattern. The form, process and starting points for each piece of work are different, and the planning phase is equally different every time. For instance, sometimes the form and presentation of the work may be obvious from the start, sometimes it becomes clear only at the end of the process.

For Tuomaala, creating a work of art is a long process made up of a number of different elements. Preparation is very important. Key themes of the works often emerge following a longer research period. In this phase, she will spend time by herself or with her team searching for information – by reading and meeting people, or arranging individual or group interviews.

”I need to think about ways of interpretation in advance and find out how this particular phenomenon has been processed and presented before. Getting excited and interested is not enough if we are dealing with an issue that seriously touches many people, or even just one individual. There’s no need to please everyone, and it would probably be impossible anyway, but you must know what you are talking about and what you want to say. You must be careful not to repeat stereotypes about issues that should be explored with an open mind in every way,” Tuomaala says.

During and after the preparation phase, you throw ideas around with your team and on your own, imagine the impossible, write, and search for more information. At the same time, you are organising the practical production side, such as finding the right locations for shooting, preparing schedules, setting up meetings with any partners, and applying for funding. All areas of work overlap.

Sometimes your piece can be constructed from many different perspectives. Tuomaala’s longest running project, Cleaner’s Voice, is an example of this – in it, cleaning professionals talk about their experiences of work and everyday life. The interviewees may have very different opinions from one another. The Cleaner’s Voice project has been developed over several years and by now, the shoots are almost routine to the team.

”The cameraman has clear instructions, and I have a structure for the interview that I try to follow. However, the advance setting cannot be too fixed with no room for flexibility. The content of the work must come first. In the Cleaner’s Voice project, the participants, the cleaning professionals, may have talked about something that I would not have thought about showing. When that happens, I make alterations to my structure – I might add new questions, for example. The participants in the Cleaner’s Voice project have taught me a lot by highlighting aspects and facts that I have not been aware of,” Tuomaala says. 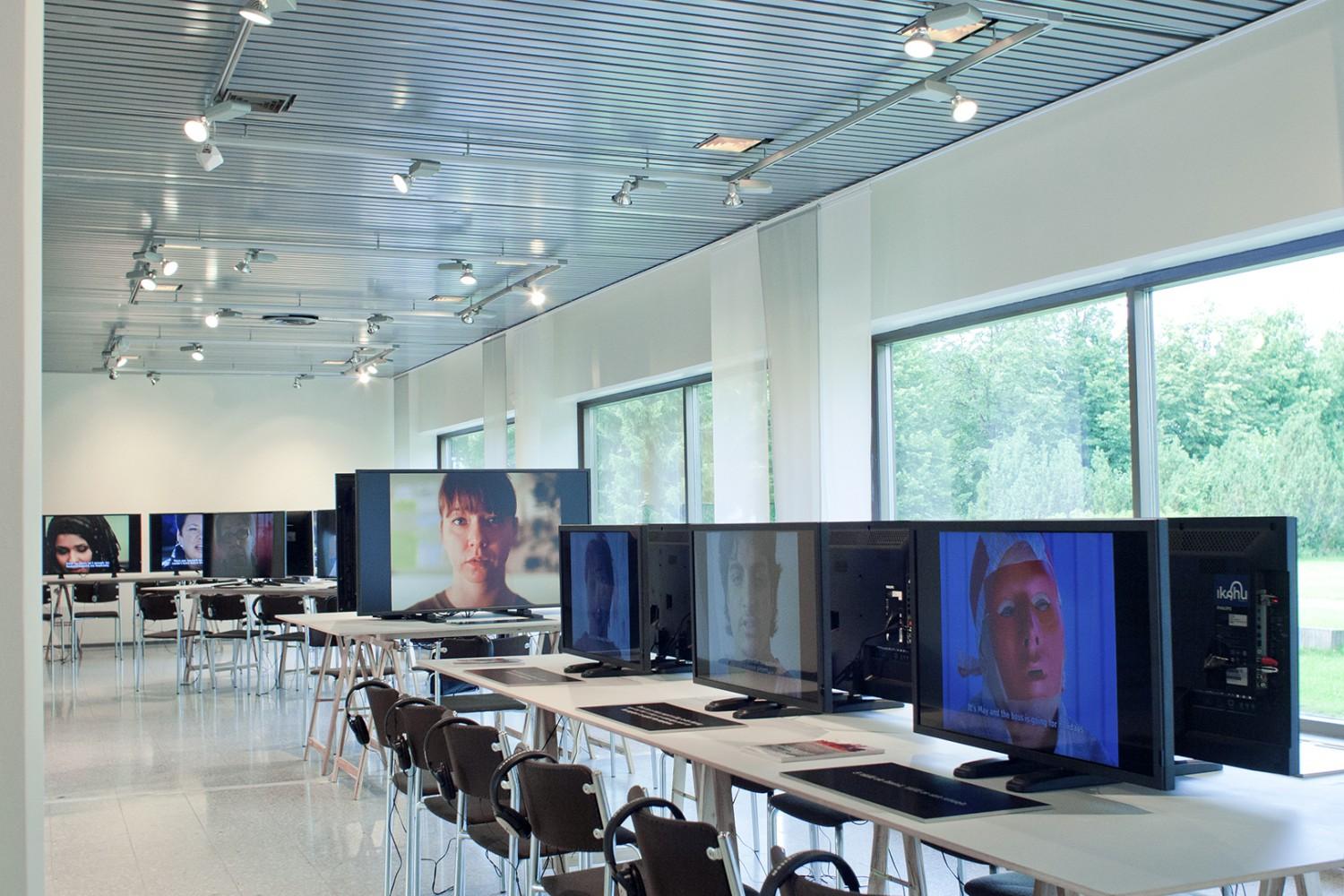 Pre-production, research and planning are key phases in Tuomaala’s work, but there should always be some leeway for those spur-of-the-moment ideas. ”One should be open, able to reassess and change plans as and when required, sometimes very quickly.” Strange Walls is a fictional piece finished in 2011, written and directed by Tuomaala in collaboration with her colleague Mikko Keskiivari. ”We had a detailed script with filming plans, but in the end, we improvised many new scenes when shooting on location, and one of these improvised ideas led to us waking up the entire crew and cast in the middle of the night. As I remember, almost all of the improvised scenes were included in the final work. In my opinion, some of the best moments are in these scenes, so listening to our moments of intuition paid off,” she says.

Large part of artists’ work is taken up by applying for funding and waiting for decisions, so many artists are forced to work with overlapping productions. Sometimes an individual project requires you to apply for funding little by little and in small parts, particularly when you are working with a large team. Professional artists should not work their teams for free.

”My works often deal with uncertainty, lack of financial means, and the system of unjust use of power. I have also openly opposed the policies used by art institutions of asking people to work ’for merit’. Naturally, I do not wish to go against the values I hold high. The team must be paid for the work they do. When you are waiting for funding, you can plan the structure of your coming works,” Tuomaala explains.

”You are often forced to tighten the budget when it comes to materials and the duration of your research work. Research and gathering material are important parts of the process, and I feel that within art there is not enough support for longer projects. Sometimes it seems impossible to really get absorbed in the research topic the way I should. I admit that it troubles me, and I wish it could be different. No-one makes films or conducts research a few months at a time,” she continues.

With moving image works, shooting is often the biggest and most visible part. In post-production, images and sound are edited, followed by sound design and colour grading of the edited work. Finally, the work is shown, but even this process is not always simple. You should find a location in advance, and even if you do, you may not be able to afford it.

Showing the work is often thought of as the main goal, but it may only be a small part of the artistic process. ”Of course, it is important that the finished work can be seen and accessed, but in art projects such as those with collaborative elements, the communal activities behind the scenes may be the key objective of the process. This fact is often ignored by many, as not all situations and incidents can or should be documented,” Tuomaala says.

At the Saari Residence, Tuomaala is working on Finnspinning-Soumi-Perkele!, an engaging installation in the shape of a keep-fit session. You can pedal through the work on a spinning bike and the work deals with everything Finnish – the culture, language, and generalised perceptions of the Finnish identity. Once again, the work of art under way at the Saari Residence is a process of its own kind. Among other things, the work is based on music and lyrics, and it involves close collaboration with a musician, rap-artist and journalist. 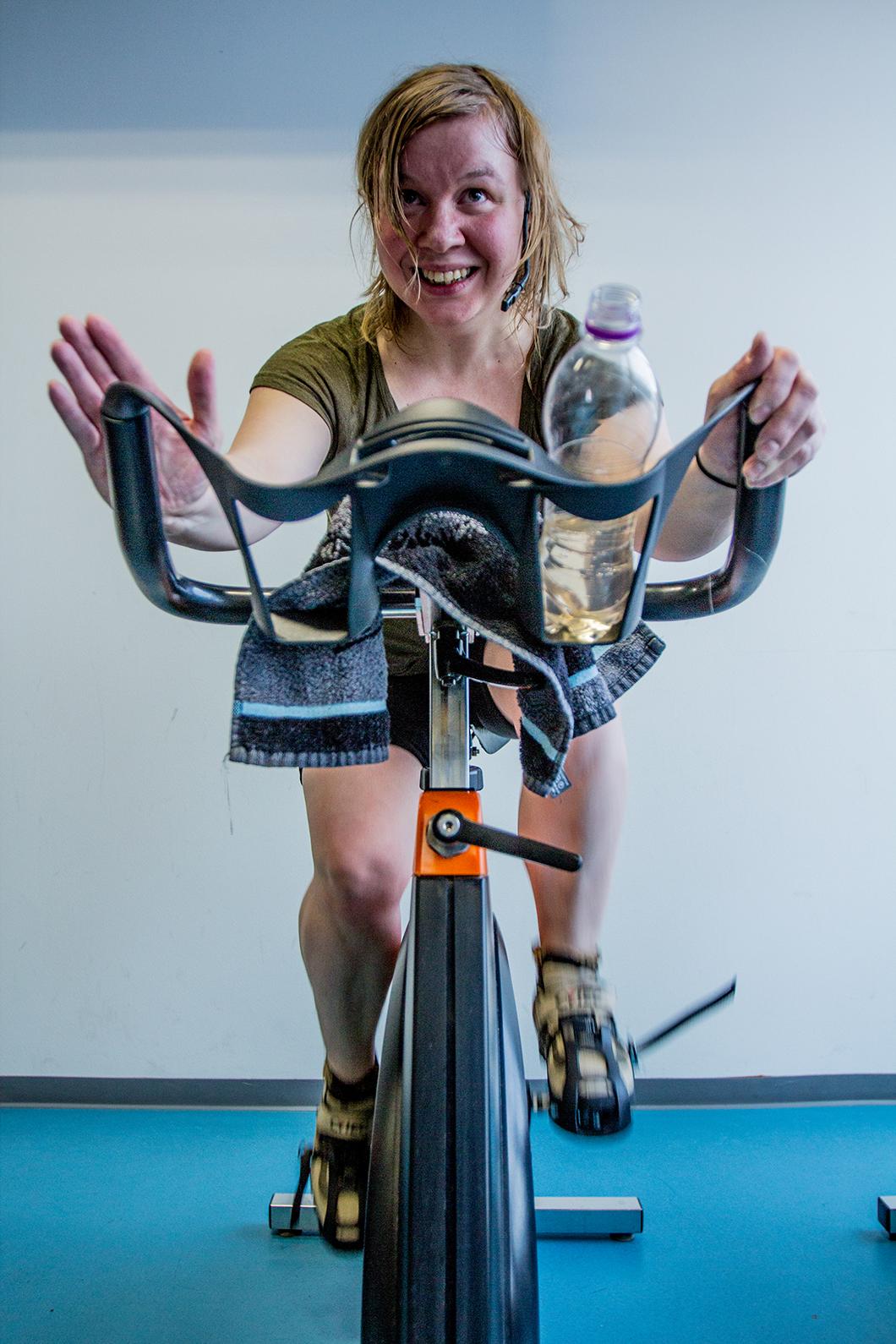 Tuomaala has been known to swear that she will never perform in her own works. Now she is the only performer in her work, and acting as a fitness instructor. This process has challenges – moving towards the unknown and crossing limits – at its core. Its objectives are challenging, and sometimes the artist is worried about everything not going as planned. ”However, I have had the desire to tackle this project for a long time, so it is time I strive to overcome any fears I may have. Being self-critical and serious is always good when you are developing a piece, but with this project I must also be able to laugh at myself. At times, the behaviour of the fitness-instructor in the work is really embarrassing and discomforting. Which is often totally natural for me,” Tuomaala says.

At the Saari Residence, Tuomaala spends her time reading and writing, but also keeping fit and ”test-driving” the parts of her script on her spinning bike. As a process, the work is also therapeutic and health-promoting.

”Our current government has made art a spearhead, and attempts are being made to try and better recognise the impact of art on well-being. At the same time, they are making cuts that affect those with limited means, including many artists. In addition, they are rushing to pass legislation regarding the self-employed without listening to the views of artist organisations and other freelancers. Maybe I developed this work subconsciously, as this process forces me to look after myself. I am not in great shape and I need practice in being able to pedal and talk at the same time,” Tuomaala laughs.

For Tuomaala, her period at the Saari Residence is exceptional, normally she is always working on more than one project at the same time. She is also actively involved in various organisations, networks and associations, all of which she enjoys. However, leaving her home town and stopping to do just one thing has felt important and necessary. It has provided the opportunity to really dive in and learn new ways of working.

What do you think, is being an artist a calling? ”I suppose it is,” Tuomaala says.

”I can’t see any other reason for doing it, and I can’t imagine doing anything else. This is characteristic for me – the most natural way to work and seek to influence. Artist’s work is diverse, and I like the fact that every day is different. To an outsider, my artist’s career may seem boring, as I spend a lot of time on my computer. But it isn’t boring, quite the opposite – in my mind I can imagine the impossible, and every now and then I even get to work on ideas that sound absolutely crazy. The hardest part of this profession is the financial uncertainty. Fortunately, these issues are now being discussed in public, and artists seem keener to get organised,” she says, summing up.