Like representative democracy, western classical music notation has its roots close to the 12th century. Unlike music, representative democracy digitized badly because it was not guided through constant aesthetic rethinking and reworking. And maybe too, because it started off crooked, being implemented by a 17 year old king! It’s rigidity has in fact come to represent stability. John Keane suggests that we have reached the age of Monitory Democracy, meaning that there are an increasing number of individuals and institutions, constantly monitoring (specially the power structures), as we do with the weather. ¹ Music on the other hand, embraced the changing real world in multiple forms.

The Direct Democracy Hackathon 2017 banner. Event organized at Kamari, during the Municipal Elections of Finland, framed around Pedro Aibéo’s campaign as a candidate for Direct Democracy.

The challenge with achieving a better politics is that the we, is a heterogenous group of people with different interests struggle to find a balance between moral and political power. Politics, in effect, is about dynamically balancing these powers in a vast complexity we call the world.

The ability to think and to do is likewise essential to music. Music is memorized and its feeling of engagement is high. Tonality provides a rigid system which guides the musician through keys or colours that can modulate in what can be represented as the circle of fifths.

Improvised music is a very pure form of music where instrumental and musical memory is engaged and combined with aesthetic judgements, instantly and continuously throughout the duration of the performance. This means that free improvisation is always a form of democracy. Music can act as a medium for democracy as well as a model.

In music, the stage is the platform for action, and we can weave an analogy of musicians who stand in for voters. Let’s call these muvos, the musician voters. The audience then represent the bureaucrats, the bureaudience. In an improvisation, everyone on stage has a voice and because the vote is direct, there is no medium besides the airborne sound-waves emerging from the instruments between the voter and other voters, and the bureaucrats making the quantitative decisions of commerce. These decisions are made on the aesthetic’ surface.

This model is politically wrong. It is not that the muvos are prone to mistake, as are the bureaudience, nor that those prone to dominate are always the loudest and most active whether on stage or making decisions. It is that there exists a divide between the muvos and the bureaudience. 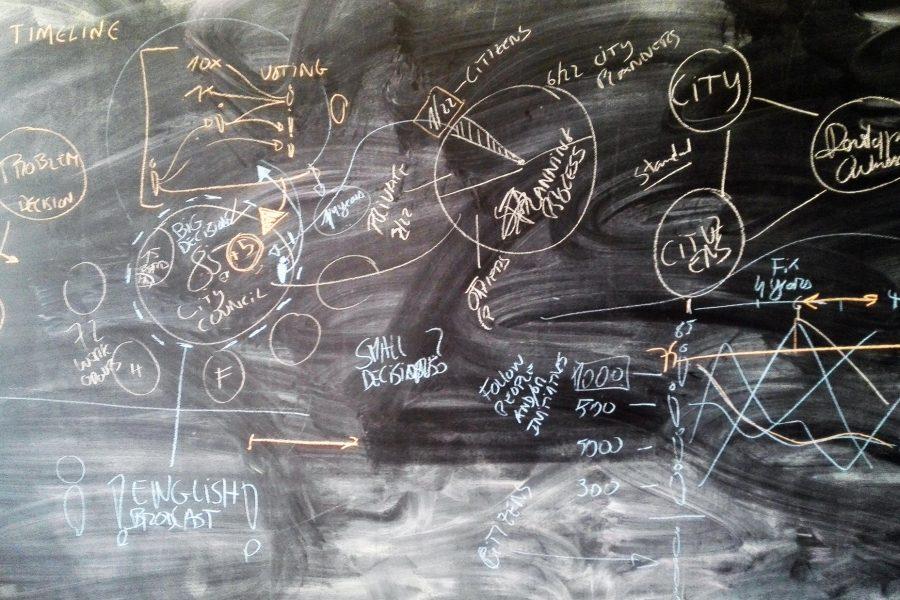 During the Hackathon, the participants, mapped at Kamari the current political structure of Helsinki and identified several solutions to improve it. These are published in the white paper.

In the case of music the solution is simple. Happenings, interactive installations, conductorless orchestras, and improvisation orchestras in their own way erase this division by submitting that anyone can play and thus directly impact the polis. The erasure of this division enables everyone to be part of the muvos. In the ideal case the bureaudience ceases to exist. They have in essence modernised themselves fully.

Politics and real bureaucrats on the other hand presents a large inverse problem to what was described above. As they hold real power and it is not as simple as voting for a municipal representative to make an impact in this process, the solution must be made to come from a different direction. It is the muvos then who must modernise. They must cease to exist.

This is where direct democracy software and circular economy models cut into the fabric of the political sphere. They enable the muvos to answer the quantitative questions directly in real time, by monitoring.²

In music, the musician executes every decision they make. In free improvisation everyone gets their voice. This would result in a society of active bureaudience. All borders in the polis would be erased and what emerges is a form of bureaucratic hyper-populism. This hyper-populism must by its nature, being hyper complex, be absolutely inefficient. Accepting this inefficiency in all decision making processes would then reduce passivity and would allow for human participation.

The issue then remains of how to embrace the inefficiency brought by hyper-complexity in a way that is transparent and safe?

Grand narratives and melodies have since time immemorial been a coagulant, and this tendency to speak out loud is something that western societies that are ruled by digital technology have disregarded. It is time to learn to speak out loud again, this time collectively, as Occupy Movement briefly tried, but quit too soon, short of further concrete steps.

In Helsinki, as in most western democracies, there is enough civic education and technology to gradually implement improvements.The work we did for Direct Democracy for Helsinki during Direct Democracy Hackathon 2017 Helsinki, held at Kone Foundation Kamari and #demokratiahack held at Sitra, feeds the larger puzzle of rethinking representative democracy and politics in general.

Although we treated it as rationally as possible, we know politics is mostly an emotional beast accompanied with a little voice of reason.³ In our white paper on Direct Democracy we did not address music, so now, you now choose the music, put it on, while you read our paper.

1 MD from now. RD being representative democracy. http://www.open.ac.uk/socialsciences/emergentpublics/seminar1/keane_monitory_democracy.pdf processing power is the key.

2 This of course is no solution to the climate disaster.

Pedro Aibéo is a trained Design Architect (M.Sc., Dipl. Ing., TU Darmstadt, Germany) and Civil Engineer (M.Sc., Licenciatura, FEUP, Porto) with over 50 buildings designed and built on 15 countries currently practicing at "AIBEO architecture". He is also a Visiting Associate Professor at UNAM University, Mexico and at Wuhan University of Technology, China, and a Lecturer, Research Assistant and Doctoral Candidate at Aalto University, Finland on "Architectural Democracy". He has also regularly lectured about Architecture at the Universities of QUT Brisbane, TU Darmstadt and FAUP Portugal.

Timo Tuhkanen is a queer composer, visual artist, writer, and activist. He has a MMus from Brunel University of West London and is currently a doctoral candidate at the University of Leeds. His music and art has been played and shown in Europe, Africa, South and North America, and Russia. He has published books with Pteron Press and Ever Books, and has founded A Listening Room which promotes listening culture, and 13lock gallery, which annexes accessible spaces for shows.