The concept of humanity has always been inseparable from technology. The tools we use also determine how we experience the world and act in it as human beings, says Thomas Freundlich, who received a grant from Kone Foundation for creating a dance piece for dancer Minttu Pietilä and an industrial robot.
Dancer Minttu Pietilä with industrial robot ABB IRB14000 YuMi. Photo: Stuart McQuade and Thomas Freundlich.

Who are you?
I am Thomas Freundlich, a dance artist, filmmaker and cameraman – a jack of all trades related to the performing arts. I have worked as a choreographer and dancer in the field of modern dance for almost two decades, and I kind of specialise in working with robots.

I have carried out some half a dozen projects in which industrial robots have taken the stage as equal performers with dancers. In addition to choreographing the pieces, I also programme the robots myself.

How did you become an artist?
I don’t think I ever consciously made the decision to don the velvet cape of an artist. At first, I focused on music, but then the theatre, lighting planning and modern dance swept me along. I still make use of one or another of these nearly every day.

Why did you apply for a grant from Kone Foundation?
Right now I’m working on a project titled You and Me, which is a full length duet for dancer Minttu Pietilä and a collaborative robot of the latest generation.

What is completely new, besides the robot originally having been designed to function safely with humans, is that it has two hands with integrated grippers, which provides delicious choreographic possibilities.

What makes the project bold?
I have described the philosophy in my robot pieces as a kind of ‘technological humanism’. Technology has always been considered a threat, and one that will destroy something essentially human. However, the concept of humanity has always been inseparable from technology – or at least since the first flint tool was invented. The tools we use also determine how we experience the world and act in it as human beings. A pure human nature that can be degenerated by technology does not exist; our technology is a part of us.

Yet we should not accept without criticism how technology changes us as people. I strongly believe that if humankind is going to survive the global challenges it will face in the coming decades and centuries, it will have to utilise the possibilities offered by technology in the best way possible.

Who do you wish to reach?
The increase in automation and robotisation in industrial sectors and also in other fields of human activity is unavoidable. It is, therefore, interesting to raise the question of what all this means from the point of view of performing arts. Can a machine function as a performer? If we define dance as conscious movement, then what does it mean if a machine seems to be dancing on stage, since it most definitely is not conscious of anything?

The key starting point in my earlier robot pieces, too, was examining how we cannot help seeing machines as intentional and even aware beings.

If it is possible, even on a small scale, to give food for thought through a single piece of dance and, thus, participate in the major conversation applying to all of society, one can say that the goals of the project have been met.

What is it like to be the recipient of a grant?
Receiving a grant for your work is always a privilege, and for me, at least, it also implies an obligation to get results. Not that I necessarily have to produce a piece of art that meets certain pre-determined criteria, but I do feel obligated to create something interesting.

There is still a bit of a ten-year-old boy inside of me, and when working with industrial robots, I can’t help thinking how amazing it is that such gadgets can be used to create curious artistic stuff. 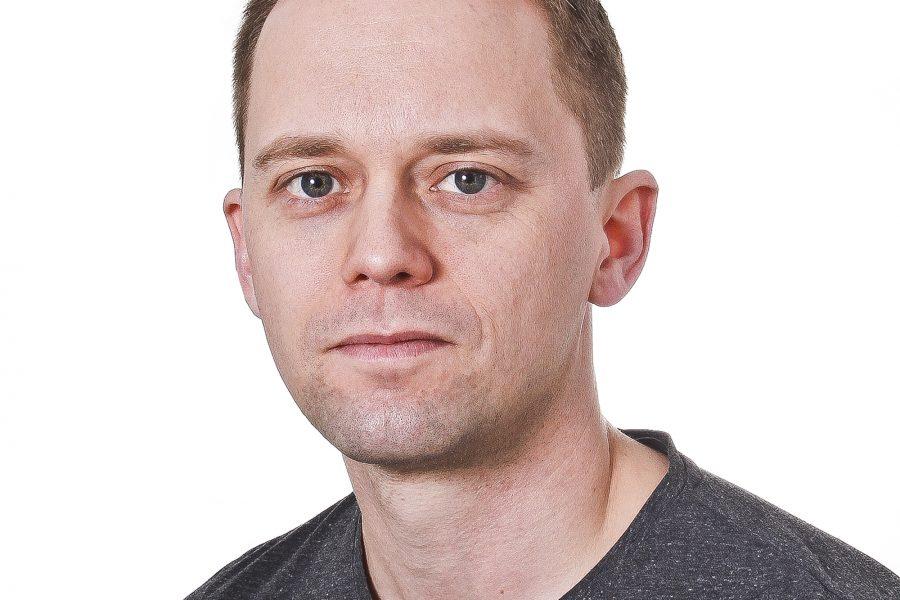 Thomas Freundlich is a dance artist, filmmaker and cameraman – a jack of all trades related to the performing arts. He was born in Espoo, has roots in Finland and the United States, and, for the time being, he has settled in Kotka. He is father to two children, and he is an avid boater whenever time allows.

Thomas Freundlich and his team were awarded a grant for their project You and me by Kone Foundation in 2016.

Watch a work-in-progress trailer of You and me.