Ark of Seeds (AOS) project creates living sculptures and performances with the aim to preserve and propagate vegetal biodiversity. This year Ark of Seeds participated in a conference about the role of seeds banks. Focusing on this experience, Egle Oddo reflects about the implications of collecting and growing seeds.
Image: Egle Oddo

Since 2017 Ark of Seeds has collaborated with the University of Palermo to develop strategies and connect seeds banks with the general public. In January 2019 AOS and I were invited by Professor Anna Scialabba (STEBICEF Department of Palermo University) to take part to a conference titled: The Role of Germplasm Banks for the Conservation and Valorization of Vegetal and Cultural Diversity.

Traditionally the role of seeds banks has been evaluated solely on the base of scientific connotations, botanical interest, methods of conservation, core collection, value of the collection for pharmacology and genetic research, rarity of the seeds, geographic connotations and economic impact of the plants represented in the collection. During the conference, while listening to the speakers I realized that the role of germplasm banks has expanded during time, and the scientific community is actively reaching out for a relational approach for seeds banks. The interaction of the banks with the community seems a greater preoccupation than before to be developed. 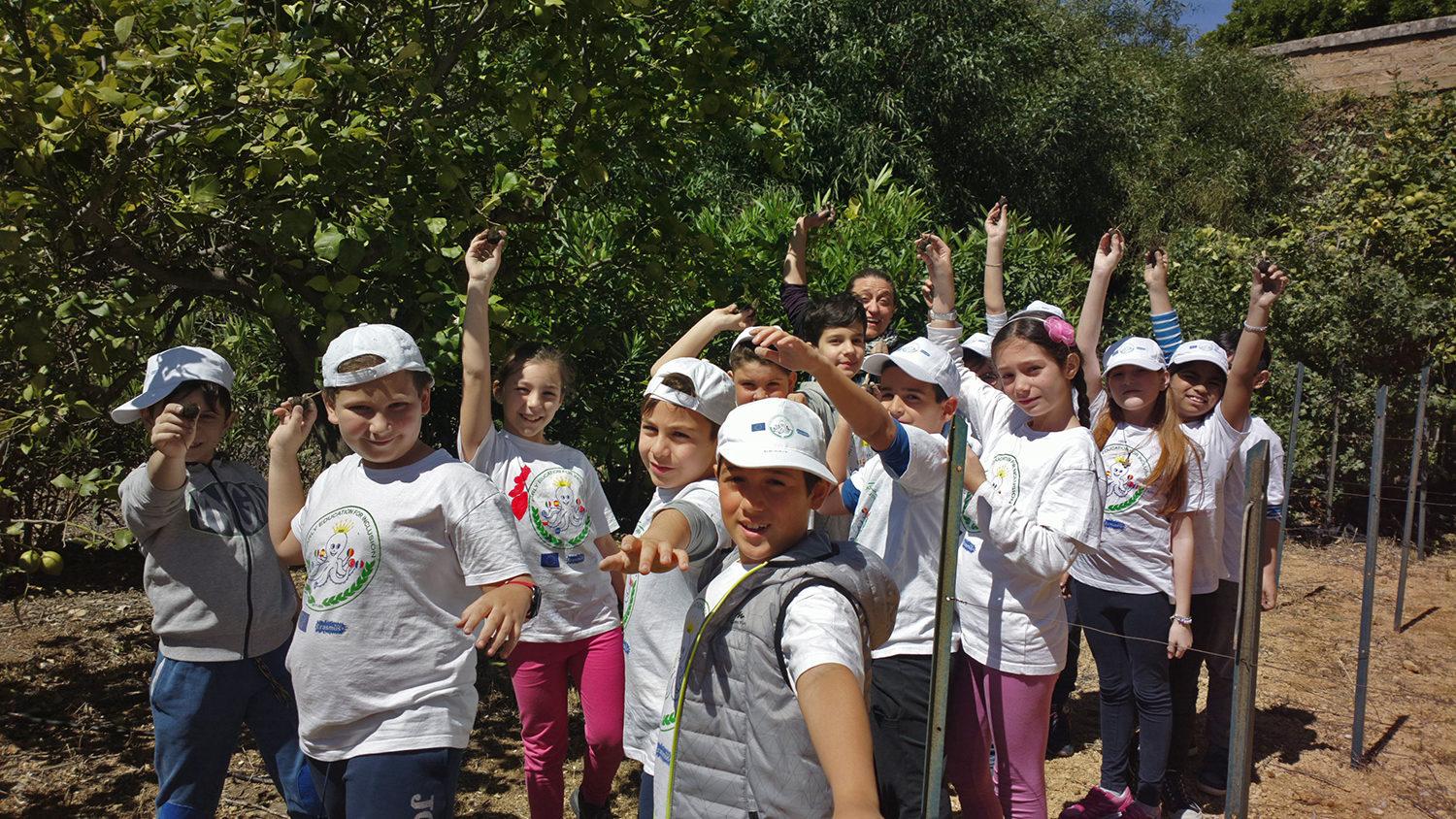 The conference was organized in Ucria, by the Park of Nebrodi and by the Italian Network of Germplasm Banks (RIBES), and supported by The Italian Botanical Society, the STEBICEF department and the Master Program in Biodiversity and Environmental Biology of Palermo University, the cultural association Nebrodi. Invited speakers were among the most influential experts of the field in Italy. I wish to summarize their interventions before drawing my own conclusions. 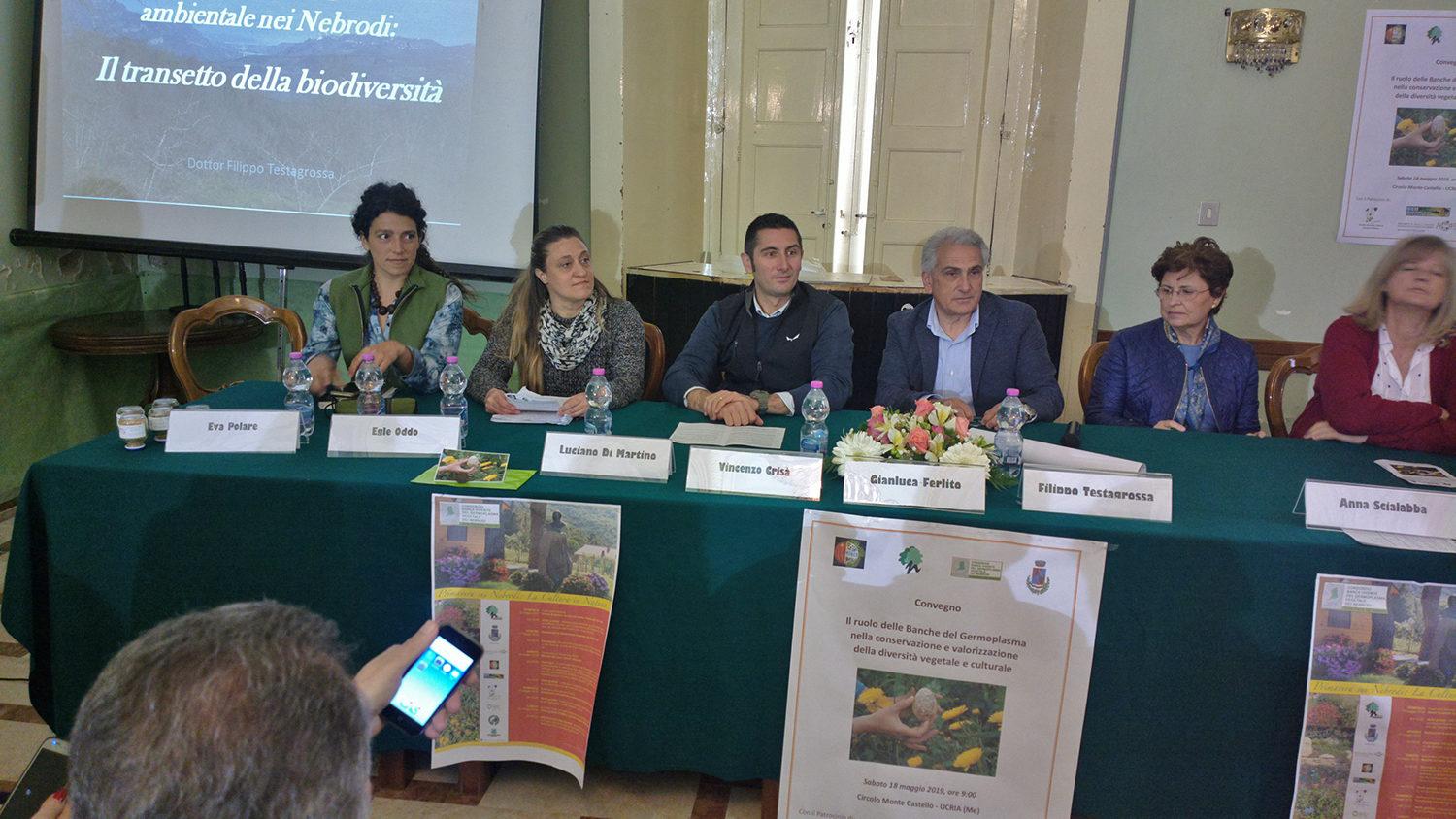 The conference: The Role of Germplasm Banks for the Conservation and Valorization of Vegetal and Cultural Diversity, Ucria, 2019. Photo: Lucia Zanetti

Sara Magrini, President of the Italian Network of Germplasm Banks (RIBES), described the strategy and the efforts of the network to represent each regional plant population in Italy. Cristina Salmeri, Dep. STEBICEF of Palermo University, made an excursus of the history of seeds banks, described how they work, and focused on the activity of Sicilian germplasm banks. Gianluca Ferlito, Consortium of Living Germplasm Bank of Nebrodi, and Ignazio Di Gangi, Park of Nebrodi, described the methods and the results of the study on the local biodiversity, underlining the successful and mutual enrichment of flora and fauna. Gianni Bedini, University of Pisa, talked about methods for germplasm conservation and how the research is advancing thanks to the presence of seeds banks. 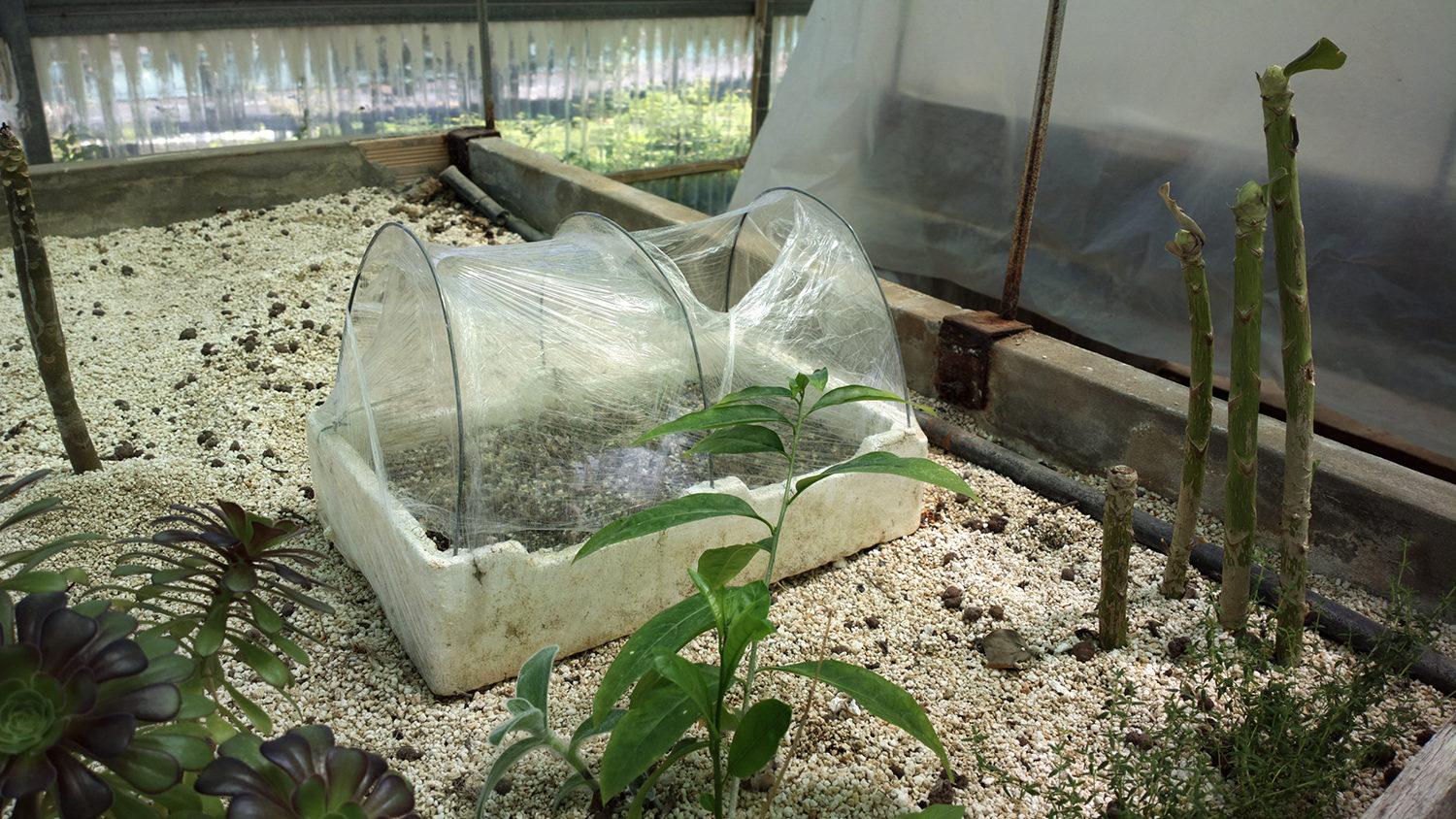 Experimentation with seeds and plants at CREA, 2019. Photo: Egle Oddo

Gianluigi Bacchetta, Centre for Conservation of Sardinian Biodiversity (CCB), presented the worldwide network of the CCB, its extensive study and practice with conservation of autochthonous flora ex-situ, emphasizing how effective ex-situ conservation is for Mediterranean habitats. Luciano Di Martino, National Park of Majella, described the strategies of the Park to engage the public in an active role for the conservation of biodiversity. Maria Carola Fiore, CREA-DC, spoke of the methods and results for the genetic identification of cortical germplasm. Anna Scialabba, Dep. STEBICEF of Palermo University, focused on the research necessary to establish a core collection representing the autochthonous Nebrodi beans varieties. 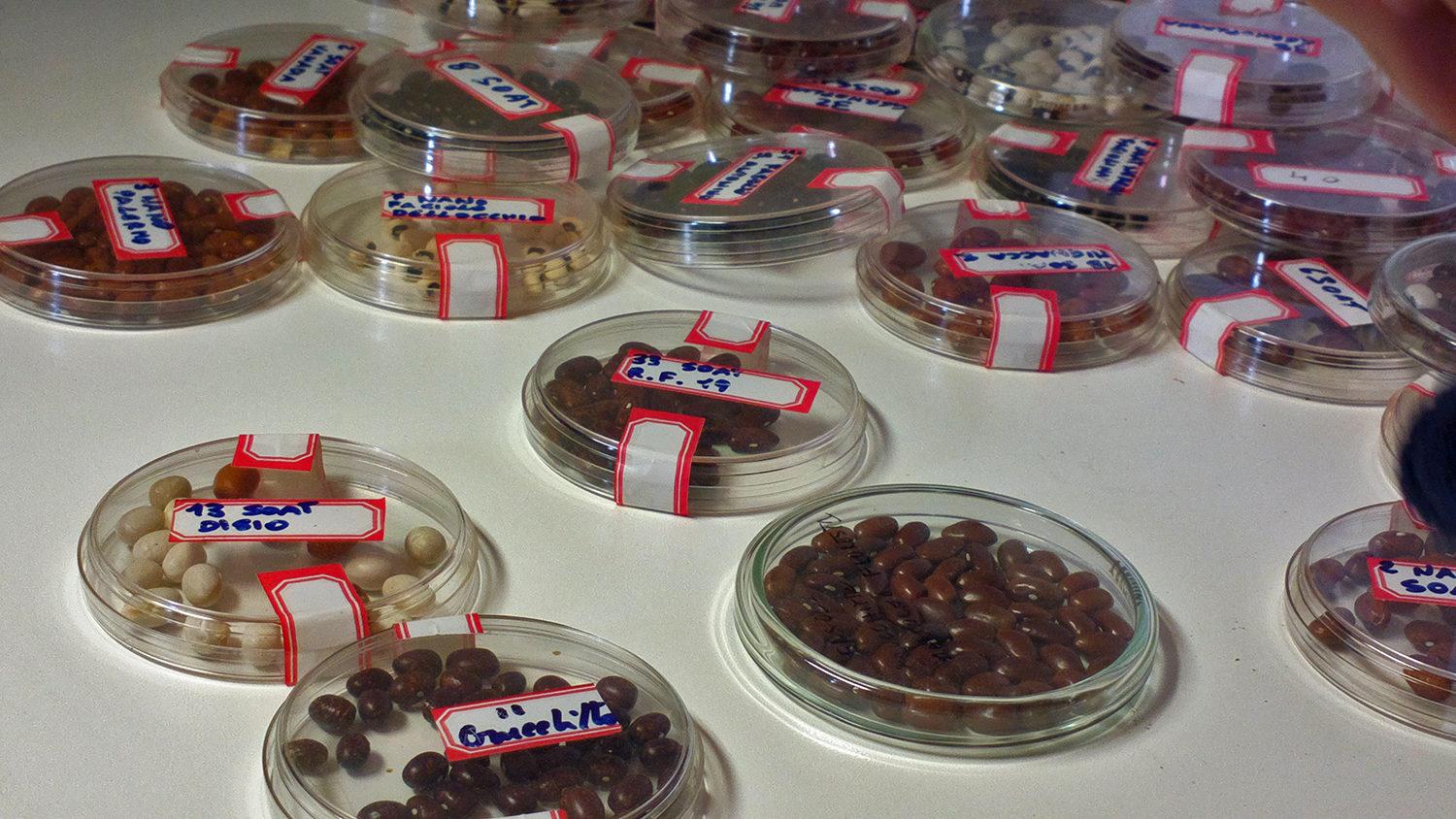 Egle Oddo, Ark of Seeds, presented the artistic research conducted during 12 years, first understanding plant seeds from the botanical perspective, and then conveying this knowledge into the realization of performances and evolutionary gardens, in relation with local communities. Eva Polare, SemiNativi and Sementi Indipendenti, spoke of her activity to engage with selected audiences interested in expanding their dietary choices, and in a second phase educating them to reproduce seeds that make food sovereignty possible.

In my opinion what all the interventions had in common was a direct mention of the concrete efforts to intercept the interest of the general public. Everybody mentioned specific local communities, younger generations, and sought not only to educate people but in some cases to transform the present relation between the vegetal and the human population imagining other alliances and new forms of mutual enhancement of health and prosperity.

This open attitude of the institutions that deal with seeds may seem an obvious consequence of the state of emergency suggested by the Anthropocene perspective. What I find remarkable is that such institutions principally dedicated to pure scientific research in the Natural Sciences, are taking upon themselves an effort to establish not only a hypothetical strategy but also to formulate an action plan to reach out and get closer to the citizens. 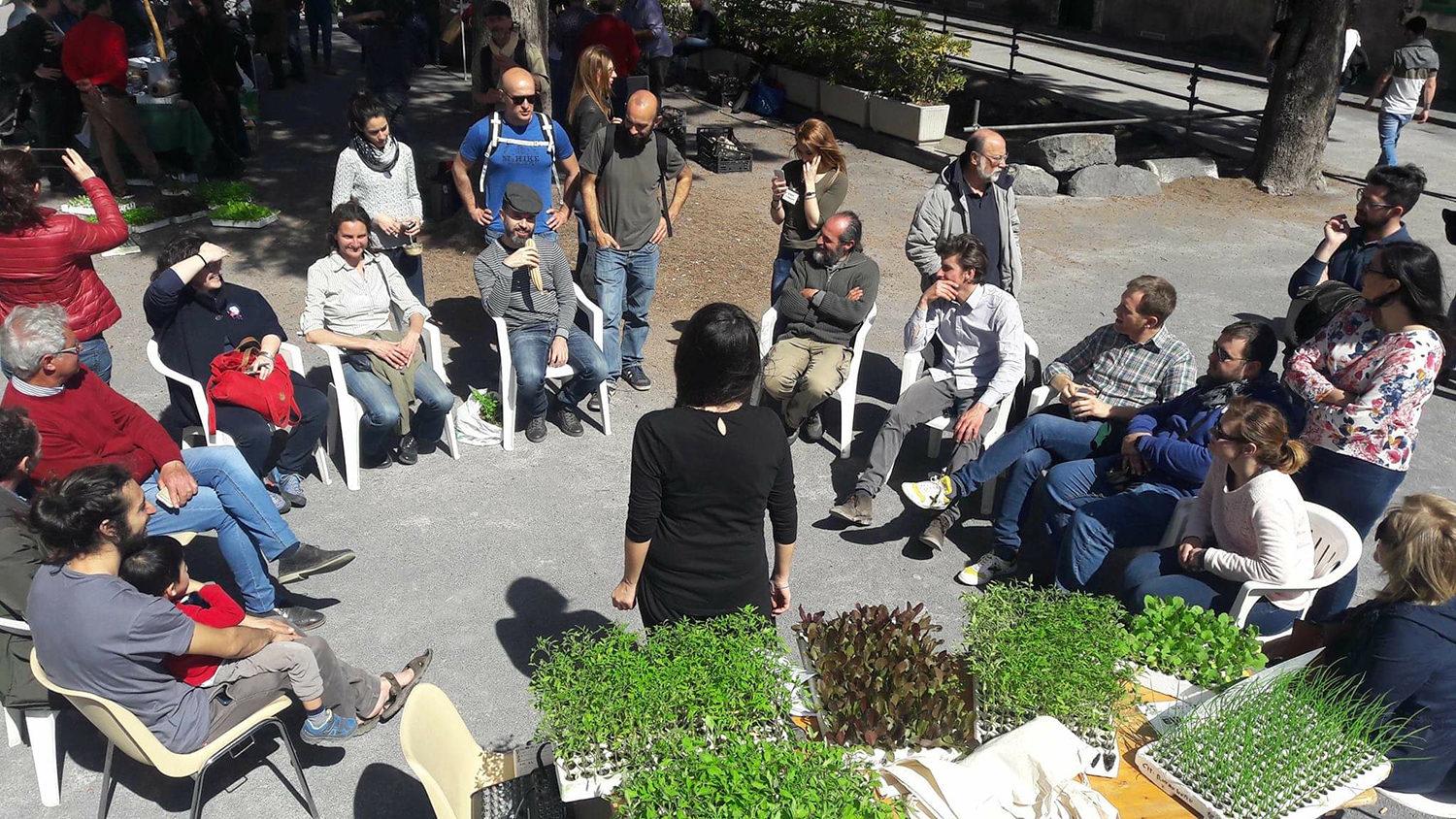 Eva Polare teaches a group of interested citizens how to reproduce seeds from local edible species that have disappeared from the markets. Photo: Eva Polare

Another remarkable feature emerging in the discussion was the understanding that the public care necessary to safeguard vegetal biodiversity worldwide can not be located principally in the digital platforms, in other words it can not be understood as effective when it merely exists as a form of online consensus. What is necessary is the soil, the proactive reunion of communities around the simple act of gathering the seeds, planting them, taking care and monitor the environment. Repeating these acts observing the changes, adapting the actions measuring the changes, educating others to do the same as a community, it can be seen as being playful, creative, and joyful.

A collective act of public care for local vegetal biodiversity, and supporting the action of the institutions like Seeds Banks and National Parks, would be a political act outside a political specific connotation or domain. Our scientific community is telling us they are facing difficulties to maintain the vegetal biodiversity, let alone to improve it. If the action from the political institutions is late, slow, or problematic, it seems imperative to offer our hands and to enter in relation directly with the problem. 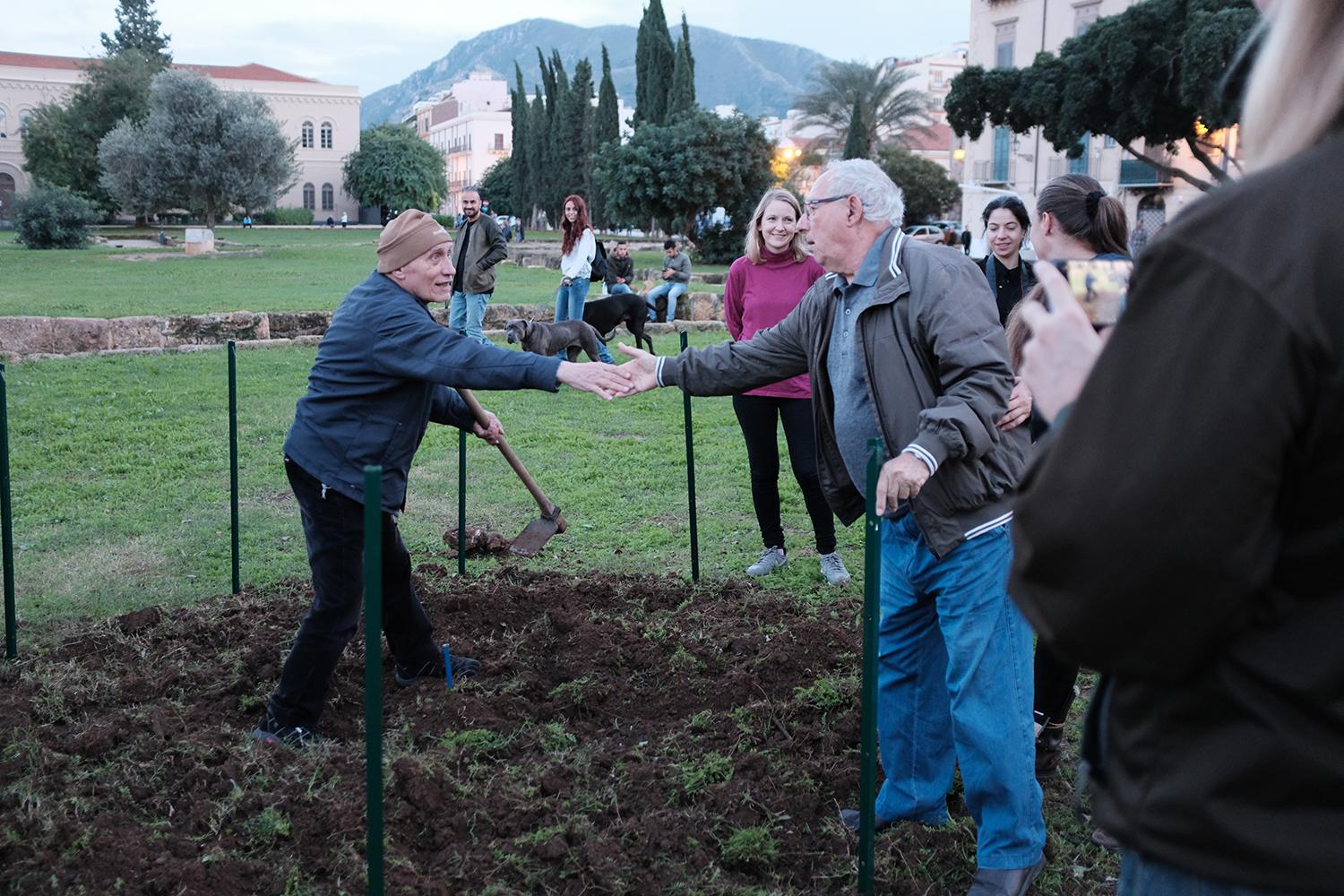 The first seeds bank, created in 1800 by geneticist and botanist Nikolai Vavilov in Saint Petersburg, was saved during wartime by the joint action of citizens risking their lives to protect the seeds collection from destruction. We can associate this with a series of concrete actions for the future when we have seen the raise of individualism and detachment from the physical manifestation of major problems facing society.

As an artist I have enjoyed learning the scientific method to problem solving and have formed my own method to act by combining these strategies with activism, civil disobedience, and performance art. I collect and share seeds because I feel compelled to be present and in relation with the problem of the collapse of biodiversity. I do it under the guidance of botanists and scientists that help me to evaluate what, where, how, why, to plant seeds so that I would not harm biodiversity instead of helping it.

How much does public care weight? And its absence? Perhaps one can start from rewilding urban green areas, making space in our constructed habitats to host a wider variety of species. Taking care of the soil, we can collect and plant seeds together, being a community no matter how far or close we are. 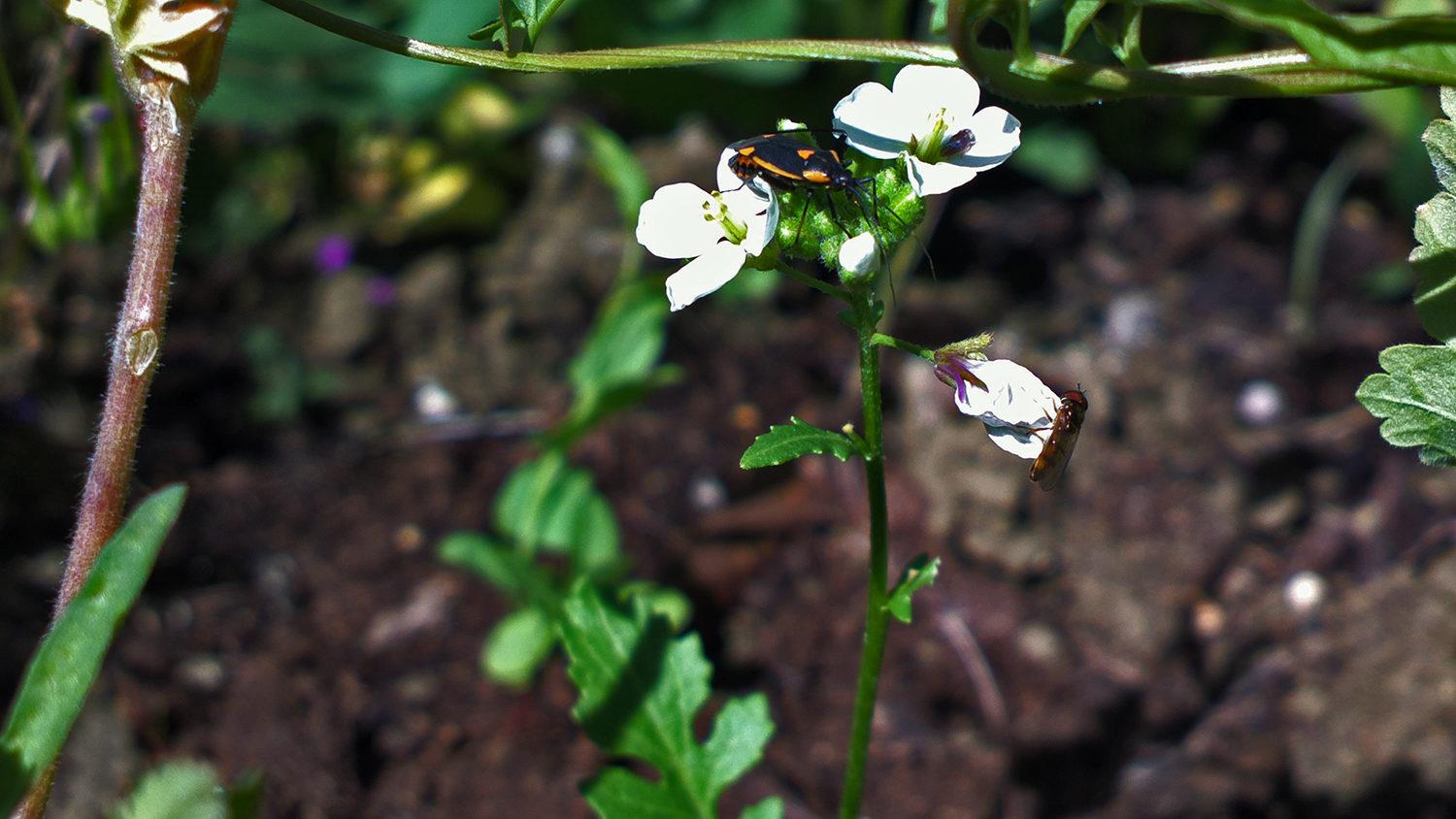 Egle Oddo is an Italian artist (b. 1975, Italy). Her work focuses on linear and non-linear narration as an art form. Interested in operational realism, meant as the presentation of the functional sphere in an aesthetic arrangement and its inter-relations, she combines photography, moving image, installation, sculpture, environmental art, and experimental live art. In her pieces industrial production morphs towards delicate handcraft, life forms appear and emerge out of sculptures and objects, film photography appropriate digital images, selected trash mix with fashion, precious edible minerals and ancestral recipes are served as part of ritual meals. Her work is present at international biennials, Museums and relevant institutions, as well as cutting edge and independent alternative spaces and events.
She moved to Helsinki in 2006 where she works and lives presently. She is part of the board of Pixelache trans-disciplinary platform for experimental art, research and activism, and of Myymälä2 contemporary art gallery. She is member of Catalysti Association of Transcultural Artists in Finland, Muu association of professional artists in Finland, and Maatiainen association for the protection of Finnish local species.