Aseman Taidepolku Bonjour is an arts and culture event that is part of a three year internationalization project supported by Rural Developmant Association Ravakka.

Mynämäen Asemanseudun Kylät ry, the local village association of Mynämäki, is attempting to diversify and develop local recreational services and event selection in a manner that is mindful of rural nature.

The project involves co-operation with two arts associations from the French countryside. The collaboration offers information, skills and experiences regarding the planning, development and execution of events suitable for a rural village. Hopefully, the collaboration with the French partners will be continued even after the project ends and will add spice to Mynämäki village activities.

The Aseman Taidepolku Bonjour culture and arts event was arranged at Asemanseutu in Mynämäki on Saturday September 8th, 2012 and included local performers and participants of all different shapes and sizes. Approximately 150 arts and culture professionals and amateurs participated in the event. The event brought together local arts and culture representatives and provided a setting for residents, artists and enthusiasts to meet. The programme for the day was diverse: art exhibitions at the local school and performances in a giant tent as well as at various other locations. The evening event filled the giant tent with music until the early morning hours.

My Contribution as a Community Artist

For the event, I created Ruususilta (”bridge of roses”), a community art work of knit graffiti involving the participation of over thirty women in the summer of 2012. The women who contributed to the work were primarily from Mynämäki but there were also participants from Turku and Askainen. The women gathered every Monday in July and August at the Saari Residence to knit. Ruususilta was finished in September 2012 and the end result was a ”bridge frock” that was over 75 meters long as well as an over 80 meter long garland which had approximately 600 knitted roses and other flowers attached to it. Animal figures from the school’s old educational posters were also attached to the lower parts of the bridge.

Together with students from Mynämäki highschool and their art teacher, Markku Karttunen, we also put together an installation of clay figurines called Metsänhenkien kosto (“revenge of the forest spirits”). The students studied the stories of Finnish forest beings and spirits and used them as inspiration for their figurines. In the installation, the forest spirits have overturned a triangulation tower as revenge for having been forgotten. 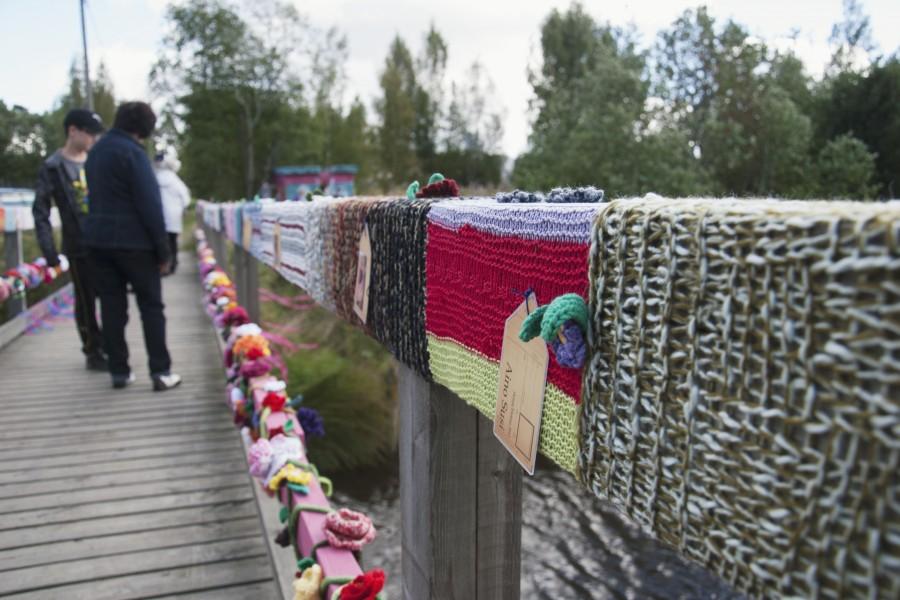 The fifth and sixth graders of Asemanseutu’s own school put their heads together and turned an old water catchment by the river into a colourful Haunted Kissing Booth. They gave new life to the grey structure with spray paint by combining lively Mexican shades with their very own ghosts.