Cities of West Africa are being forced to look like all other cities in the world. Pedro Aibeo writes how we need to be far more experimental and inclusive in designing cities. This text is about Pedro Aibeo's work in Benin and Nigeria.
Photo: Pedro Aibeo

Picture above: Lagos, on the road to Cotonou. Photo by Pedro Aibéo, October 2017

As I entered Nigeria, to present the ideas of “Architectural Democracy” I was pushed to sit in the forest by the military, in pitch dark, with a rifle pointed at my head, for hours, and constantly being insulted for being white. But after the traumatic welcome, I managed to pursue my work on Architectural Democracy.

Being based part-time at Aalto University, I traveled to West Africa in October 2017, to Benin and Nigeria, invited to present my research on “Architectural Democracy” at the 1st Art Biennial of Lagos [1].

The topic of urbanism, how we plan cities, in Lagos, has been growing in interest and becoming rather prominent, following for example the work of Rem Koolhaas and Kunlé Adeyemi on how Lagos survived through an apparent lack of top-down governmental organization, into a more classical hierarchical western model of urban planning [2].

Lagos’ growth and conditions are alarming, especially in a time of climate change and mass migrations. Top-down restrictions will likely not curve the ongoing population’s thirst for growth and better life quality. Children are still seen as life insurance policies for the parents and so families are enlarging. In fact, the top-down policies of urban models based on the western cities are worsening the problem. West African countries have a different dynamic and need a different answer. 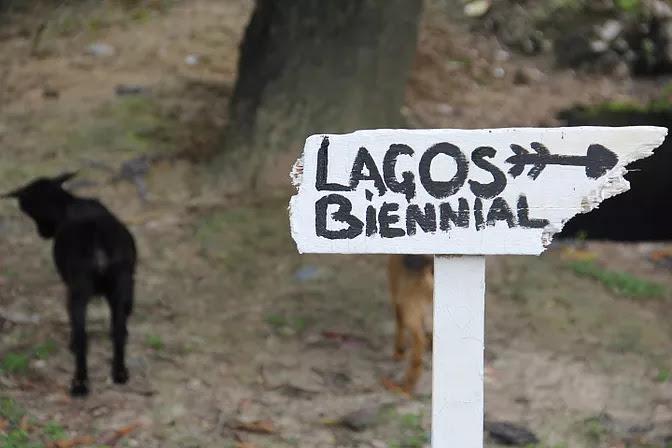 The path to Art Biennial was in the middle of a slum area, into an abandoned train station. It was polemic, as BBC news reported, that this artistic event, which claimed to include the local residents, but at the same time expelled the ones who were inhabiting the rusty trains. These people happened to be artists too. Photo by Pedro Aibéo, October 2017 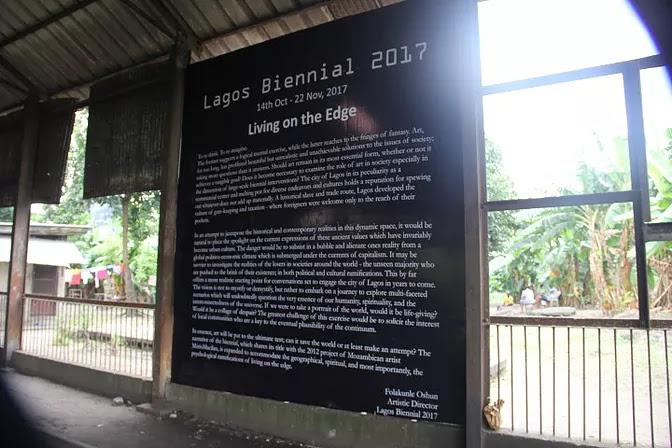 The manifesto of the Art Biennial, Living on the Edge, a fitting title to whoever has witnessed Lagos, indeed people here live on an everyday struggle for survival. Photo by Pedro Aibéo, October 2017

Cities of West Africa, as I later discussed with Associate Professors Anthony Adebayo and Tunji Adejumo at the Department of Architecture of the University of Lagos, are top-down city planning enforcements not in sync with the West African reality.

“We need a new experimental African model here” said Adejumo, “and we need it urgently”.

In a book offered to me after my recent lecture at TU Delft, Holland, Wouther Vanstiphout describes this export process in the opening article “The export of Dutch Architecture and Planning, 1963-2013“. One of the actually applied exports was the planning of the city of Singapore. Despite the success of Singapore, which grew out from being a developing country from its independence in 1965, to be a leading economy, such is unlikely related to the Dutch model. If so, it did not prevent it to become a flawed democracy [3] under the rough hand of Lee Kuan Yew in contradiction to the more free state of Netherlands.

Quoting Vanstiphout, “we assume that our methods and attitudes to politics, planning and design fit to the context of the cities we are working with.“[4]. The design of great cities will unlikely come from a set of rulers. The design of our cities is deeply diverse and political, and ought to come from a multiple source of grass-roots solutions. Solutions are complex as our cities are. But only if all our citizens become politically literate, with access to knowledge, be it institutional or via ICT, can such a local process start. The understanding of society by its citizens is fundamental to avoid exploitation.

Often the understanding of a society is abandoned as it is seen as a complicated thing. For example, religious practices (also sports) give people a sense of community and hope, both fundamental parts of human existence. Science is also able to offer such with the positive byproduct of actually creating solutions, not merely hoping for delivered miracles. The scientific community, if strengthened, combines the best of both worlds, the sense of belonging (emotional) with logic reasoning (rational).

Instead of investing our own time in complicated sport tactics or confusing religious texts, we should instead be investing our already scarce free time into something more useful and equally complicated. In the words of Henk WJ Ovink, the Senior Advisor for Secretary Shaun Donovan, US Department of Housing and Urban Development:

“The desire to simplify and narrow our horizons is pointless. It deprives us of the multiplicity of opportunities and possibilities. It also reduces the number of potential solutions and creates a false sense security and certainty.” [5]

The research of Architectural Democracy is proposing a framework to deal with the complexity of our cities. To understand how these work by combining two of their most influential fields: Design and Politics. Both architects and politicians are the main responsible for the shaping of our cities and we all need to be capable of understanding these so we can all plan the cities together. 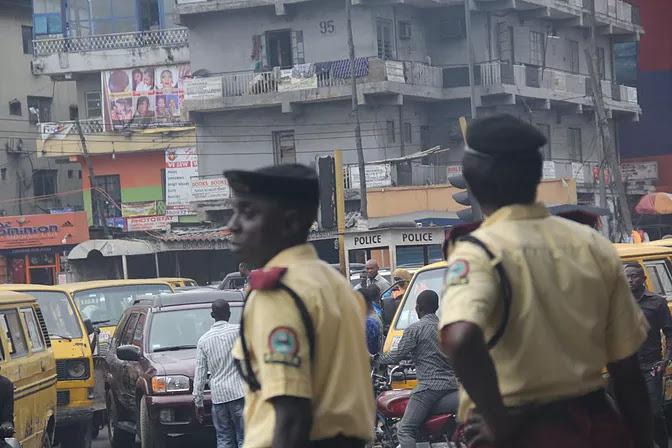 A typical roundabout of Lagos downtown with officers. Photographing police or military can put one into serious trouble, but they are plenty in the country due to the hundreds of ongoing conflicts, so occasional shots are bound to happen! Photo by Pedro Aibéo, October 2017

The poverty in Lagos and its slums are immense but so is its wealth (mainly from oil reserves). With this, the religious events and their promises of better times are seen everywhere. From the “Wonder Land” to the Egan Central Mosque and the flood of street signs warning us of the coming of Jesus. Wherever there is the mix of poverty and power, with no doubt, religions flourishes. It is of no surprise to me to see this pattern in other corners of the world too, such as in London, where social inequalities prevails despite the great access to knowledge. But one does not see that phenomena occur so much where I live, in Helsinki, in a more open and socially equal society. 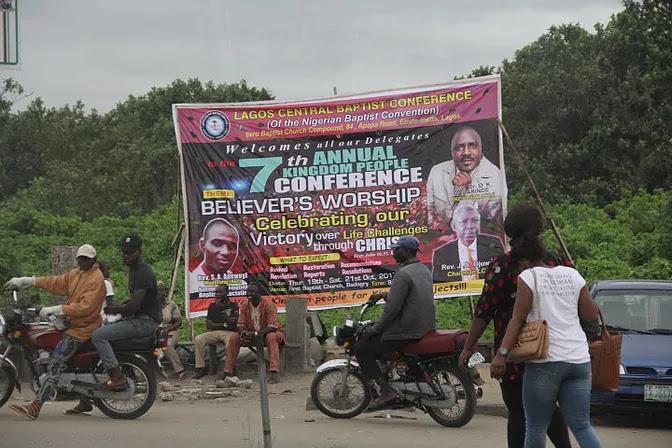 The whole region of West Africa, mostly on the main roads, is colored with plenty of posters for religious events of all sorts. Photo by Pedro Aibéo, October 2017

Before starting the long trip from Lagos to Cotonou, I sat on the bus before departure and for one hour I had to listen to a local priest. Video by Pedro Aibéo, October 2017

Cities in West Africa are not working properly as we, westerners, have been pushing it via the political elite. Both the bureaucrats and politicians are profiting from fast outcomes and boasting from a deluding throne of higher knowledge. This is an urgent topic to be studied and to be more often reported, specially in a time of massive migration coming mostly from Nigeria.

When entering Benin, the neighboring country, there is a large sign from the European Union saying “Non a l’immigration clandestine” (Say no to clandestine emigration). The billboard of around 4 by 5 meters, comes with a drawing of a boat filled with people, just outside the city of Porto-Novo. What use will a poster do to mitigate migration?

The border between Benin and Nigeria. It is not allowed to film this area. The border is a desperate place. The side of Nigeria is filled with military and street pirates. A dangerous place not only for tourists. Recorded October 2017 by Pedro Aibéo

Data and analyses from this trip will be presented at later stage in more detail through the research work of “Architectural Democracy”.

This trip was made possible due to the kind support of FinCeal and of Villa Karo. The research of Architectural Democracy is supported by the Kone Foundation.

Pedro Aibéo is a trained Design Architect (M.Sc., Dipl. Ing., TU Darmstadt, Germany) and Civil Engineer (M.Sc., Licenciatura, FEUP, Porto) with over 50 buildings designed and built on 18 countries currently practicing at "AIBEO architecture". He is a Ph.D.c. and Kone Foundation Research Fellow at Aalto University, Finland on "Architectural Democracy". He is also a Visiting Associate Professor at UNAM University, Mexico and at Wuhan University of Technology, China.
Related
At the Well blog

An anonymous evaluator: Evaluation of residency applications takes time and requires a self-critical approach
At the Well blog

Thinking about sustainability and modes of presentation