38 years at the Saari Manor

Simo Vuotinen began working at the Saari Manor in 1975, when the buildings were occupied by the Agrifood Research Centre, MTT. When MTT left, Simo stayed on as an estate manager, working for Kone Foundation. His duties included small building maintenance jobs, clearing snow, forest work, gardening and mowing the lawn. The estate manager lived on site, in the Footman Wing. Simo Vuotinen retired and moved off site in 2013, and Heidi Lapila took over his duties. Simo’s knowledge of the estate and the local area was vital for running the estate and the residence.
Simo Vuotinen worked 38 years at the Saari Manor. Photo: Pirre Naukkarinen

When MTT left the Saari Manor in winter 2006, Simo’s employment as an estate manager and research assistant also ended, but he was asked to stay on to look after the garden and show the estate to potential buyers when the manor was for sale. “There were a dozen potential buyers, including Hanna Nurminen and Hilkka Salonen,” Simo says.

Kone Foundation closed the deal and, in 2007, started to build the residence. They made Simo an offer; Hanna Nurminen had learnt about Simo’s vast experience and asked him to stay on. The decision was easy, Simo says: ”Had I continued working for MTT, I would have had to move to Piikkiö but, fortunately, I was invited to stay here”.

There was a lot of work at the new residence, and not many people. ”At the beginning, Hanna and I were the only employees. My first task was to start renovating the apartments for the residence guests. They needed to be fit for accommodating artists”, Simo says. ”We also used outside labourers for the renovation work”.

When MTT left, they took all the machinery and tractors with them. The building work started from scratch. ”We started by buying tools. It was hard work, I must say”.

We did a lot of work, but in an old manor, there is always something more to do as soon as you finish one part. ”The renovation work will never be finished. I may have left, but Heidi is there to continue the work”. 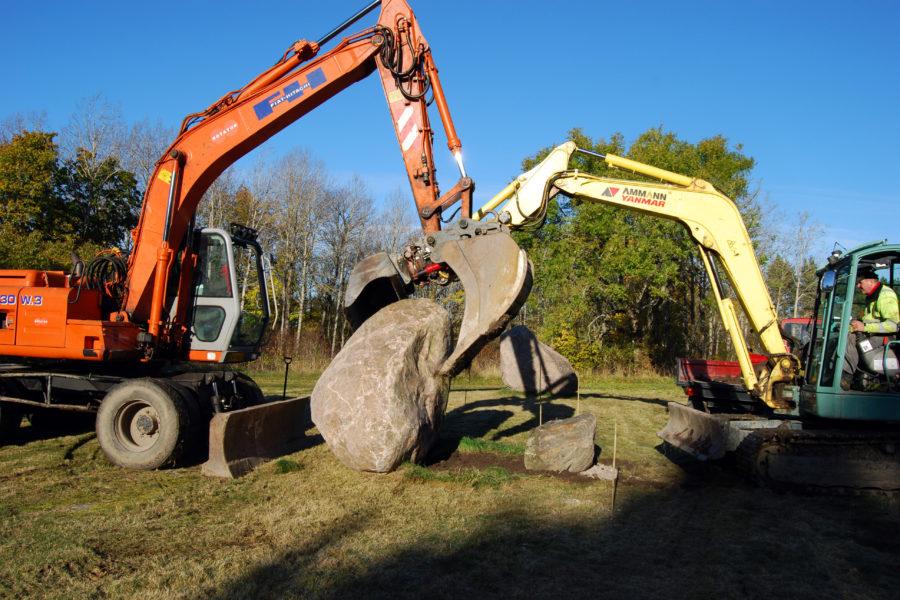 Simo Vuotinen was there to help the Japanese artist Mineo Kuroda with building the “Wa – to relate” stone work. Photo: Pirre Naukkarinen

When the residence apartments were finished and the artists arrived, Simo was there to help with the practical issues. They had questions about heating up the sauna and about completing their artwork. Simo was there to help the Japanese artist Mineo Kuroda with building the Wa – to relate stone work: ”We brought stones here and moved them about. Sometimes I might spend two days working on one stone, trying to place it exactly the way Mineo had planned. I had the tractor and I would keep turning the stone. Sometimes we needed two diggers, one to push a stone and one to pull it. We could not move the stones until the roads and the lawn were frozen or the heavy stones would damage them”.

Because the manor was Simo’s workplace and home, work would sometimes spill into his free time. ”In a way, I was on duty 24 hours a day, and I was more involved than the people that went home at four in the afternoon”, Simo says, thinking back. Sometimes duty called on his days off: ”Something always got broken, whether it was Christmas, Midsummer or Labour Day. Like the one Christmas Eve when the heating stopped working”. According to Simo, he was not stressed, as he knew how to take it easy. 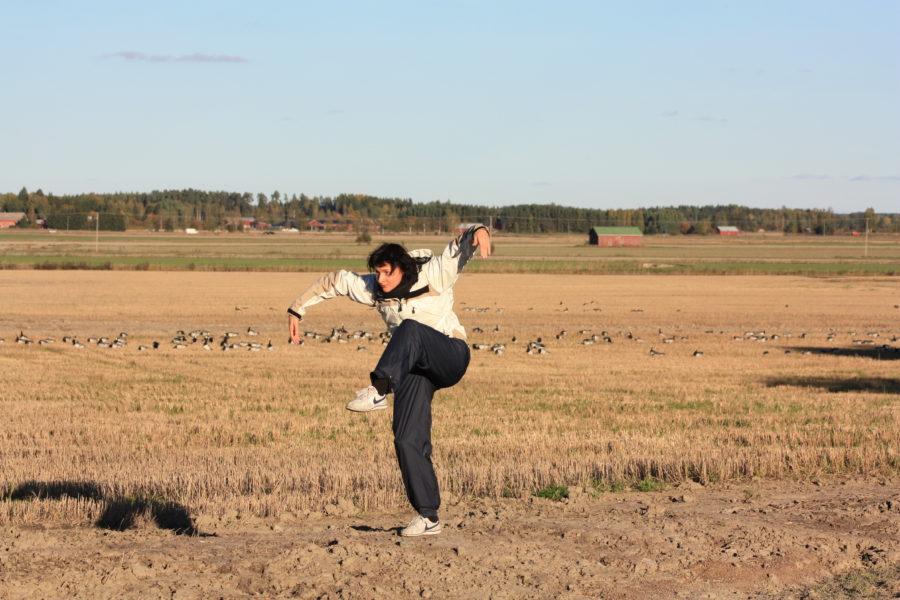 Simo Vuotinen was behind the camera when dancer Satu Rekola pretended to be a crane and a goose. Photo: Simo Vuotinen

The Saari Residence offers a peaceful environment and sometimes surprising encounters with the creatures of the forest. The estate manager became familiar with the forest animals and their paths: ”I knew more or less where they would come and go”, Simo says. The best time to encounter animals was after sunset: ”They would come in the evening, the raccoon dog, badger and the deer. The night wanderers. Often, when I was working at the barn, I would see a deer walk behind the window”.

Simo remembers one incident with birds all too well: ”In the autumn of 2009, dancer Satu Rekola was in residence. There were lots of migrating birds in the field. I asked Satu to come with me and see how close we could get to a flock of geese. There must have been 500 birds there. I was certain that as soon as we start walking the birds would fly away. But Satu was able to walk to the birds, walk among them, and pretend to be a crane and a goose, and I was behind the camera. Not one of them flew away. They were all still there as we walked away. That was a wonderful experience”.

In 38 years, Simo got to know the local people well and gained a good knowledge of the manor estate and the area. His skills and knowledge played a vital part in the management of the estate and running of the residence. Simo has fond memories of the local people: ”I wish to thank everyone we worked with and all the staff at the manor for the past years.”